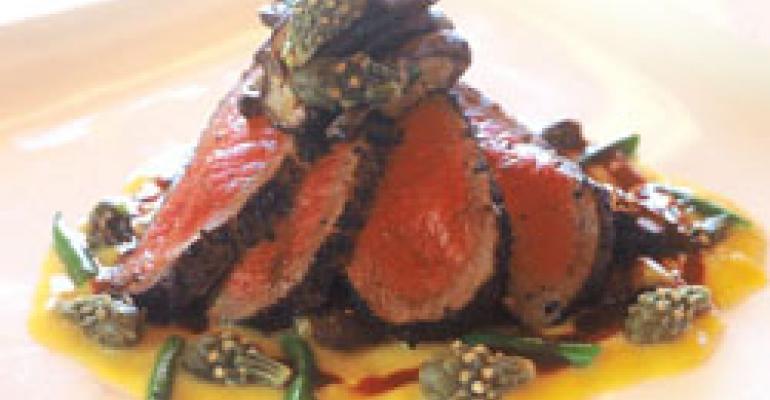 When Janos opened on Halloween of 1983, Tucson, Ariz., hadn’t seen a fine-dining restaurant whose servers weren’t intimidating men dressed in tuxedos, and Southwestern cuisine was barely a glimmer in the eyes of a few unusual chefs.

Chef-owner Janos Wilder helped to change that, giving his guests finely crafted food that nonetheless reflected Southern Arizona, in a setting that was refined but did not make them feel like they needed a degree in French literature to eat there.

In 1983, “the service model was really the hierarchical service team,” Wilder recalls. “Tuxedos, front captain, front waiter, back waiter, food runner… You never saw a woman—maybe a cocktail waitress or hat-check girl. How stupid is that?”

Wilder hired based on performance rather than gender and deep-sixed the tuxedos. He also wrote the menus in English and trained his servers—dressed nicely, but in contemporary clothing that put guests at ease—to know exactly what the dishes were like.

That training was necessary, because the guests had no way of knowing what to expect.

“You couldn’t say ‘steak Diane’ and they’d know what it is,’ Wilder says. “They’d never seen these dishes before because in some cases we’d created them that night.”

Using local, seasonal ingredients has always been a big part of Janos, and Wilder had already been doing that for awhile when he opened the restaurant, first at the Gold Hill Inn in Colorado, and then in France, where using local and seasonal produce is a way of life.

As he prepared to open Janos, even before advertising for kitchen staff, he advertised for gardeners.

He didn’t have much space, so he focused on herbs—basil, mint, chives. And he got farmers and local gardens to grow squash blossoms and the like, and then greens, beets, turnips and tomatoes.

Sanford D’Amato, chef and owner of Sanford restaurant in Milwaukee and a friend of Wilder’s, says the Tucson chef was ahead of his time.

Wilder says he didn’t mean to be at the forefront of Southwestern food. “If we’d been in Portland, we’d be doing Pacific Northwest food,” he quips.

But as it happened, other Southwestern chefs like Stephan Pyles, Robert del Grande, Dean Fearing and Mark Miller also were starting to incorporate local ingredients and cooking styles into fine dining.

“I didn’t know anything about them at the time,” Wilder says. “I didn’t meet them until years later. We were just doing our thing.”

But the trend-seeking media saw the signs of a culinary movement, and Janos began to get national recognition.

“That was really important to validate us locally,” Wilder says, “because it was so different from what anybody had ever done here.” Some locals were having trouble wrapping their heads around it, but if Janos was good enough for national media, they decided it was at least worth a try.

The location helped, too, Wilder admits. Until 1998, Janos was in the former home of Hiram Stevens, the first territorial representative from Arizona to Washington.

“People came to see that home as much as anything else,” he says.

Meanwhile, the chef got more deeply involved in preserving the area’s culinary heritage and hooked up with Native Seeds Search, a seed bank that seeks to preserve indigenous produce and reintroduce it to common use.

Wilder has been involved in the organization for more than 15 years and is currently its treasurer.

“He’s definitely a dedicated supporter of local food production issues, not only through the art of food but also through information and education,” says Julie Kornmeyer, Native Seed Search’s director of distribution.

In 1998, Janos lost its lease, but soon Wilder found a new landlord. The Westin La Paloma approached him to take over a restaurant space there.

“The building was fabulous. We loved it,” says Wilder, adding that having 500 guest rooms nearby was an added bonus.

It was also a larger space, giving Wilder the opportunity to add the more casual J Bar, which he did in 1999.

The newer restaurant’s menu is Pan-Latin, with none of the French influences or fine-dining trappings of Janos.

“It’s great that a guy of his caliber branched out with a more casual offering,” says Tom Stauffer, food writer for the Tucson Citizen newspaper. “Janos has long been one of the icons here, not just because of [Wilder’s] talent as a chef, but because of his dedication to local and seasonal ingredients.”

His friend D’Amato sums him up: “I’ve known him for years and I think he’s just that combination of great chef, great restaurateur, great teacher and great person, and you usually don’t get all of that wrapped into one.”