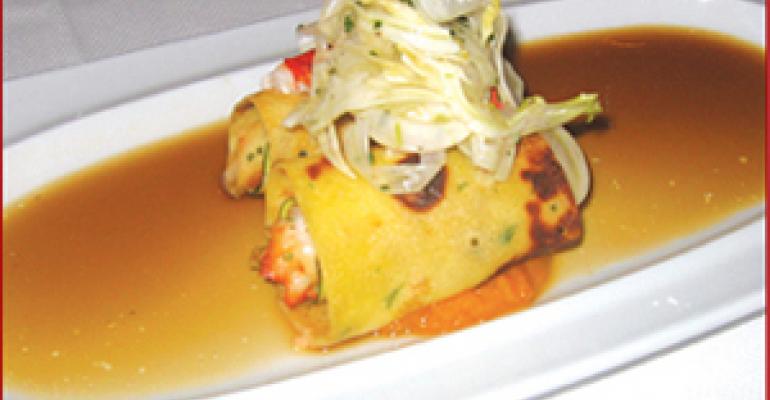 With Maine lobsters carrying their highest wholesale prices in more than a decade, operators nationwide are rewriting menus and steering guests away from the more costly crustaceans. Some chefs are minimizing lobster in dishes, if not abandoning the prized commodity altogether.

Increased demand and an unseasonably cold spring have crushed Maine’s lobster supplies, driving prices up by 70 percent or more in recent weeks.

At Fleur de Sel, a fine-dining restaurant in New York City, for example, chef Cyril Renaud was paying $9.99 per pound for lobsters just a few weeks ago but stopped buying them in mid-April when the cost hit $20 per pound.

“There’s a point to which you can pass on the costs, but eventually it doesn’t make sense,” he says.

William Zambrotto, general manager of Tavern on the Green in New York City, echoes the point.

“It’s insane,” he says. “I’ve never seen pricing like this in the 18 years I’ve been in the industry.”

And the price kept going up.

So instead they offered three U-8 shrimp in wine and garlic with a petit filet for $39.

“The only lobster we have now is the lobster roll for lunch, and we’re using cull lobster,” which is missing a claw, he says. In mid-April culls were around $12 a pound, and Tavern was charging $26 for the roll, which had the meat from a one-pound lobster on it. That put the food cost in the 40-percent range, “but you can’t really charge much more for a sandwich,” he says.

Kristen Millar, executive director of the Maine Lobster Promotion Council, says the cold, stormy weather of recent months kept most lobstermen from checking their traps, and the few who did found that lobsters had not taken the bait.

“When it gets really cold, [lobsters] go into sort of a hibernation state,” Millar says. They won’t come to shore in search of food until the weather warms up, she adds.

During the winter, Maine lobster providers kept a supply of lobsters in tidal ponds, as they—and other major lobster-supplying areas—always do, but Millar says the supply was decimated by high demand.

“We put away about the average of the past five years, but by March we were [nearly] out of lobsters,” Millar says. “We just weren’t anticipating this high of a demand.”

Lobster sales generally spike in late February when Red Lobster’s annual Lobsterfest promotion begins, she says, but this year demand was coming from a fragmented array of other quarters as well, mostly domestic.

Whatever the reasons for the demand crunch, restaurateurs are finding ways to adjust.

Diane Harkoff, owner of Legends restaurant in New Suffolk, N.Y., took whole lobster off her menu once it hit $14 per pound. But even before then, as prices climbed to $12.50 around Easter, she started stretching her lobster. Instead of whole one-and-a-quarter-pound lobsters for $29 to $36—she aims for 25 percent food cost—she offered the choice of half a lobster, either stuffed with crab or as what she called a “nouveau Thermidor,” with a sauce of cremini mushrooms, shaved asparagus, sun-dried tomatoes and scallions.

“That cut our cost almost in half, and the people were still having lobster,” says Harkoff, who charged $24 to $28 for those dishes.

She says the half-lobsters sold better than the whole ones.

A signature dish at Restaurant Serenade in Chatham, N.J., is lobster cannelloni. But when chef-owner James Laird saw his lobster prices double overnight, he says, “there was no question that I had to do something immediately.”

So he swapped the lobsters for prawns.

“It’s not selling as well as lobster, I’ll tell you that, but it’s a good substitute,” he says.

He poaches the shrimp in vegetable broth, shells them and rolls them in an herb crêpe with fennel, ginger and butternut squash. For a sauce he uses a crustacean consommé, made mostly with shrimp, but he still has some leftover lobster stock that he is using to augment it.

Michael Haimowitz, executive chef of Arthur’s Landing in Weehawken, N.J., says he got rid of his popular seafood “plateau,” a tiered platter of shellfish, because without lobster, “it becomes less of a value and less of a ‘wow’ factor.”

He’s concerned about Mother’s Day, when lobster is a popular choice among his guests.

“Mother’s Day is a day to treat mom to luxury,” he says. “This year it looks like lobster’s going to be more of a luxury than ever.”

Haimowitz says he doesn’t believe in changing prices according to market fluctuations, but in the summer he’s accustomed to offering whole lobster as specials to draw customers in. “This year it’s going to be harder to do,” he says.

Although New England’s lobster fleets were expected to return to the seas in late April, Haimowitz points out that Mother’s Day will cause a spike in demand, and demand also will go up in the summer months.

With New England lobsters so expensive, some restaurant operators are taking the opportunity to offer other luxury items that ordinarily are cost-prohibitive.

Eric Ernest, chef of Royale in Los Angeles, is stretching his Maine lobster by using it in composed items, like a $19 lobster cobb salad or a $24 lobster BLT made with pain de mie, organic tomatoes, bacon, red romaine and other high-end lettuces, and then dressed with aïoli and served as a club sandwich. Each of those has three ounces of meat.

He also has found that his customers, seeing that Maine lobster is $22 per pound and Australian lobster is $40 a pound, say they might as well splurge. Other items that continue to outprice lobster, but by less than they usually do, are Australian crystal crab and Alaska red king crab.

Michael Lachowicz, chef-owner of Restaurant Michael in Winnetka, Ill., agrees with everyone else that “the lobster prices have gone goofy high.” So he has been using shrimp shells to make bisque and sauce américaine.

“That being said, a good chef can adapt to the flow of nature,” Lachowicz says. “A great chef sees this as a challenge.… There are so many other things to complain about besides this. Let’s man it up a little and learn the fundamentals before we call ourselves ‘chefs,’ and we won’t have to cry over a price here and there.”