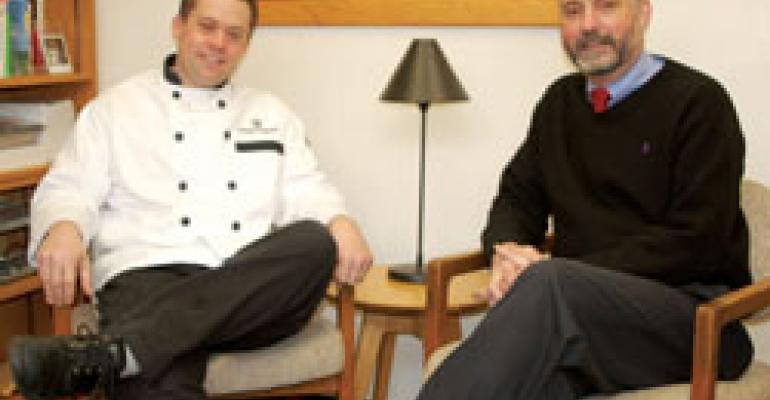 “She’s one of my better sources of input,” says Pierce, who is UConn’s director of Dining Services. “She’s a runner, and she’s very conscious about what she eats, and so I heard the lament: ‘Dad, I’m always on the go and I eat a lot in the coffee shops, versus eating in the dining units, when I’m going from class to work. You need to come up with more healthy options.’”

While mulling over his daughter’s comments, Pierce began musing about how busy and often sleep-deprived students are today, juggling classes and work, and how interest in healthy lifestyles has increased.

He enlisted the expertise of Rob Landolphi, the university’s culinary operations manager. After consulting with Amy Pumerantz, a registered dietitian from the campus health center, Dining Services set a goal of creating full-flavored dishes that would have fewer than 450 calories and 10 grams of fat or less.

The line’s initial six items range from 131 calories per serving for the Citrus Bean Salad to 383 calories for the Ranch Garden Wrap. The Spa Foods were developed specifically as on-the-go fare to be sold at the campus coffee shops and convenience store; residential dining halls already offer “Lite Line” options, which are dishes that are lower in calories and fat.

The Spa Foods program includes five sandwich wraps — four launched with the initial rollout last August and one added subsequently. The wrap itself was a primary consideration, as the developers noted significant calorie and fat differences among sizes and types of wraps. In addition, instead of relying on popular sandwich components such as cheese and creamy dressings, which can quickly boost fat and calories, the Spa Foods feature plenty of fresh vegetables, fruits, fresh herbs and lower-fat dressings, especially vinaigrettes.

The Spa Foods selections, made fresh and packaged daily in a central kitchen and delivered to seven locations around campus, have been well-received: Approximately 4,200 are bought each week.

The best seller is fresh fruit with maple-vanilla yogurt. The Dining Services staff members blend low-fat vanilla yogurt with maple syrup from a local sugar house and pair the mixture with cubes of fresh fruit. Depending on the quality and availability of fruit, the dish might include red or green grapes, cantaloupe, honeydew, watermelon, and pineapple.

Top honors for popularity among the wraps is closely matched between the Turkey Wrap with Honeyed Apple Cabbage and the Curried Fruity Tuna Wrap.

Jessica Greenwood, a senior from Southbury, Conn., buys a Spa Foods item a couple of times a week and appreciates the fact that she can choose a more healthful item when she wants to pick up something quick between classes. Her favorite is the Fruity Tuna Wrap.

“I like that it’s really healthy, and it combines a lot of different flavors that you might not normally think of to put in a wrap,” she says. “It has red grapes, sliced almonds and cranberries combined with tuna. That’s not something I would normally think of to combine in a wrap, and it actually tastes great together.”

The focus on flavor is key, Landolphi says. “The thing that’s interesting about a lot of these dishes, especially when we’re dealing with spa foods and healthy foods, is people think healthy and they don’t think flavor,” he says. “So, one thing that we set out to do is really prepare these dishes with a punch of flavor. We wanted people, when they bit into these dishes, to say, ‘Wow, that’s really good,’ and almost forget that they’re healthy, and just be more satisfied with their purchase.”

The Thai Shrimp Wrap with Spicy Dipping Sauce, for example, includes shrimp, cucumbers, carrots, and generous amounts of mint, cilantro and basil in a rice wrap. The dipping sauce, Landolphi says, “has a nice amount of heat to it, a nice zing,” adding that it was “the perfect complement.”

UConn Dining Services has taken advantage of state-of-the-art technology to promote the Spa Foods line. Besides receiving coverage in the local media, Spa Foods were advertised on the campus television station and on YouTube — the 30-second spot can be viewed on the Dining Services’ website.

Where the ideas come from

Pierce and his team keep abreast of news and innovations in the culinary world at large and the world of campus food services in particular, but students are at the center of it all.

“You have to have one ear to the ground of what the trend is, but you have to also go and be very close to the students,” Pierce says.

Prior to the rollout, students had the chance to sample and comment on potential Spa Foods items. Pierce and his team assess the Dining Services’ offerings through regular surveys of students and campus meetings. As of this writing, students can complete an online survey about the Spa Foods.

To keep the Spa Foods concept fresh, Pierce and Landolphi plan to rotate in new selections periodically. Chili-Peppered Chickpeas will likely make a debut at some point, once suitable packaging has been decided upon, and the chefs plan to develop items with produce from local farms for the summer.

“We want this to be an ongoing project,” Landolphi says. “We don’t want to just stop and say,‘This is our Spa Foods line.’ We want to continue to grow it over the next few years.”