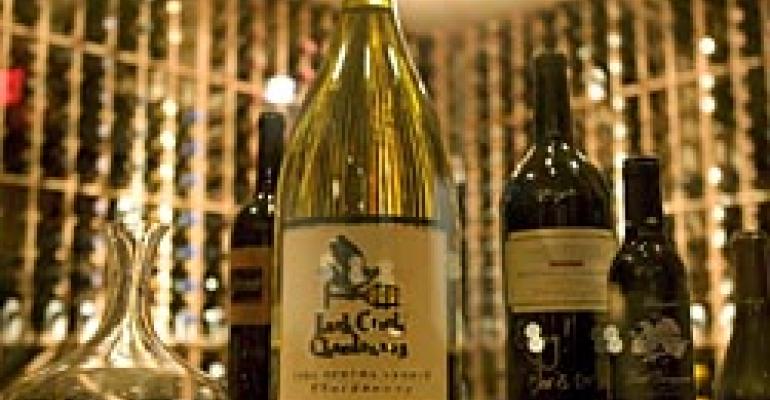 To half and to hold: Operators lure patrons with wine discount promos

At first glance, a wine promotion that slashes the price of fine wine by half may seem akin to charity. Although generosity may be involved, rest assured that there are also hardheaded business motives. Restaurant operators who offer eye-popping, limited-time wine discounts are hoping to fill the house on slack nights, cause a buzz among wine aficionados and create an emotional attachment that seeds repeat patronage and future wine sales long after the prices go back up.

That's understood at Lark Creek Restaurant Group, the San Francisco-based operator of 10 upscale restaurants with seasonal American menus and all-American wine lists. Each July for the past five years, the group has offered its entire wine collection, currently 800 labels, at half price at brunch, lunch and dinner. For example, in July, patrons of Lark Creek Inn in Larkspur, Calif., enjoyed Williams Selyem 2004 Ferrington Vineyard Pinot Noir, regularly priced at $135, for $67.50.  Likewise, at One Market in San Francisco, customers could sip Peter Michael 2004 Mon Plaisir Chardonnay, regularly priced at $92, for a cool $46.

"We tried to create a situation in which people could order the wines they really wanted to drink rather than the wines they thought they could afford at the moment," said co-founder and co-proprietor Michael Dellar.

He chose July for the promo because that's when business travelers, Lark Creek's core customers, tend to stay home, according to Dellar. Marketed aggressively with in-restaurant materials, press ads and email blasts, such a promotion strikes a chord with Bay Area wine lovers. They're left with the lingering memory of a wine and food experience that exceeded expectations, Dellar said.

"The truth is, the month after the promotion, our sales dip a little bit, because people have made many more visits and they back off a little," said Dellar. "After that, we think it picks up, because people remember their good experiences."

The goals of Wine Wednesdays at Fish in Charleston, S.C., are to build interest in boutique wine as well as to attract midweek patronage. The casual restaurant offers any bottle priced at $80 or below on its 100-item list for half-price from 5:30 p.m. to 8 p.m. that day.

"Very often, customers shy away from buying wines they haven't heard of," said general manager Caroline Jackson. "This lets them try something new without committing to the level they normally would."

Although losing money might seem inevitable with such price slashing, some operators report gains. For example, Lark Creek Restaurant Group made a few bucks during its July promo, because although the profit margin dropped, total sales rose. "Our wine sales do not go down in dollars, even though we're only charging half price," said Dellar. "We lose margin, and that money goes into marketing expense."

Also enjoying a boost was Brennan's of Houston. A September promotion that knocked off half from any wine on Mondays transformed an ordinarily slack weeknight in a slow season into something akin to a weekend. "My wine sales have been as much on a Monday night as on a Thursday or a Saturday night — Friday is our busiest night — and our customer counts are up," said James Koonce, the upscale restaurant's "wine guy."

Great wines by the glass at loss-leader pricing is the unique wrinkle at Legal Sea Foods in McLean, Va., part of the Boston-based casual chain. Its Fine Wine Happy Hour offers two big-name wines — one white, one red — for only $9.95 a glass, on Monday through Wednesday from four to six p.m. through October. Included are such wines as Far Niente 2005 Chardonnay, Kenwood 2004 Jack London Cabernet Sauvignon, Cakebread 2005 Chardonnay and Caymus 2005 Cabernet Sauvignon. As fans of those labels are well aware, wines that pricey are rarely, if ever, poured by the glass. For example, Legal lists the Far Niente Chardonnay at $62 per bottle and the Caymus Cabernet Sauvignon at $75.

The idea is "to create a bit of a buzz," said vice president of beverage operations Sandy Block, M.W.  "Rather than do a typical happy hour, I said 'let's do it with fine wine.' "

"Once we get them in the door, hopefully we'll have an opportunity to wow them in other ways, too," said Block. "People will say, 'What a great value.' "