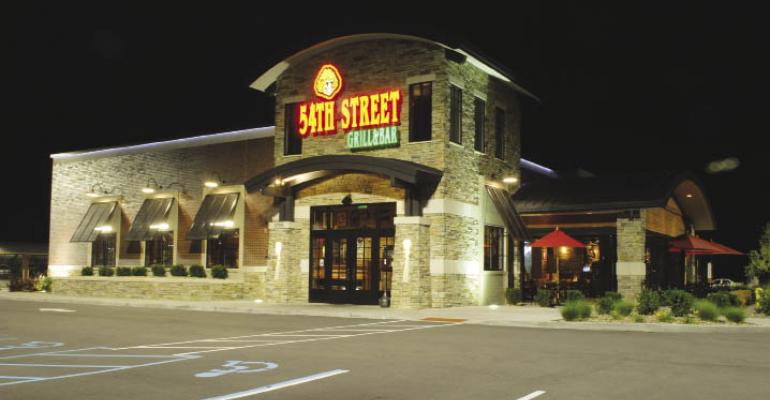 In late June, Thomas E. Norsworthy, founder of the 54th Street Grill & Bar, is headed to San Antonio to scope out properties for what will be the concept’s next regional hub.

With 15 restaurants now open in the Kansas City, Mo., and St. Louis metropolitan areas and a 16th set to open in August, Norsworthy is ready to break into a new market. Pointing to the Texas region’s growth potential, population and business-friendly environment, he says he anticipates opening nine or 10 units between San Antonio and Austin in the next five to seven years.

“There are lots of players in those markets, but we feel we can compete fine,” Norsworthy said. “Unless we came to the conclusion it was extremely oversaturated, it wouldn’t scare us off.”

In its nearly 20-year history, Kansas City-based 54th Street Grill has proven its mettle in the crowded casual-dining segment. It has set itself apart with an extensive menu of made-from-scratch items and a decor laced with authentic artifacts carefully selected by an individual charged with scouring the countryside to find them. Proof that the concept works can be found in the $3.6 million average unit volume, a figure that exceeds competitors by between 20 percent and 35 percent, Norsworthy said.

“The past three years have been good to us,” he said. “During the worst part of the downturn, we were flat. Right now in the last six weeks, our average unit sales are up 5 [percent] to  6 percent over last year.”

A glance at online reviews finds many guests lamenting long waits but then applauding the concept’s service, food, value and family-friendliness.

One first-time visitor wrote on Urbanspoon: “Had three appetizers: ’shrooms, steak quesadillas and boneless Buffalo wings. Although all three of these sound about as generic as they can get, all were well above and beyond standard pub fare. The sauces/guacamole/salsas that go along with the above were awesome. Will absolutely return.”

The first 54th Street Grill opened in an end-cap location in September 1990, and for Norsworthy, who had no industry experience, it was the beginning of a long learning process.

“I underestimated the complexities of [the business],” he said. “I made a lot of mistakes.”

The first six years were a time of major evolution, he said. His goal was to create a fun atmosphere with an active bar business, but with a focus on food. The menu was constantly changing, sometimes too much, he admitted. Today, however, it’s difficult to add new items because everything sells so well, he said.

The concept is known for its made-from-scratch dips, soups and sauces, as well as baby back ribs and a wide variety of burgers, pastas, steaks and seafood. The check average is $12.85. Food accounts for  83.5 percent of sales and alcohol for 16.5 percent.

Except for the first unit, all subsequent locations are in standalone buildings in the suburbs. Newer restaurants are around 6,200 square feet and have 175 to 180 seats, including a 50-to-55-seat, climate-controlled patio located behind glass walls.

Startup costs for new units are about $3.5 million.

In plotting the concept’s growth, Norsworthy seeks out retail-rich areas, where competitors already are doing well. Management teams are transferred from existing markets to new ones to ensure the continuity of the corporate culture.

“If you are going into a new area with managers you know, it’s easier and they are not intimidated,” Norsworthy said, adding that growth also means new opportunity for the professionally hungry.

The concept’s target audience represents a broad swath, ranging in age from 25 to 55 — as well as those younger and older.

“You need to appeal to a diverse group to get high [sales] numbers,” he said.

Growth is funded internally, and Norsworthy says he has no interest in franchising or growing to 1,000 units.