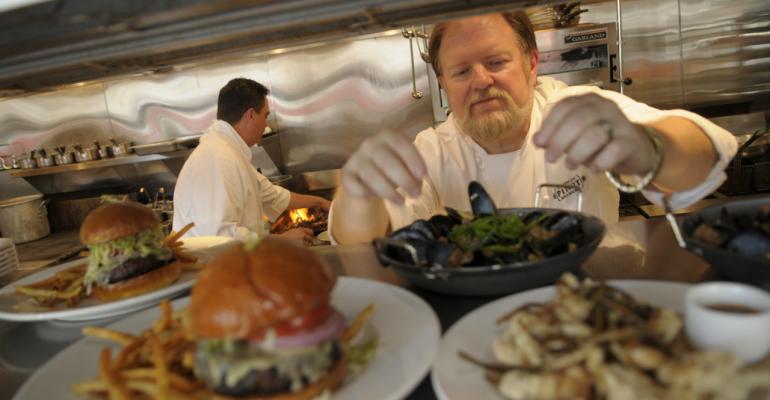 Bill King spent the past 25 years working for the McCormick & Schmick’s restaurant chain – first as a unit chef, and then gradually rising through the ranks to become vice president of culinary development and training.

Then he left the corporate world in April to open his own restaurant, Pinot, in Portland, Ore. Pinot, which opened earlier this month, is a 230-seat restaurant serving French bistro and brasserie food, tweaked with Pacific Northwest ingredients.

We’ve only been open 17 days, but we started off pretty well. We sold out the restaurant last night with some big parties.

Why did you leave McCormick & Schmick’s?

Forty years ago when I started to work in the industry, it was my dream to open a restaurant. My early career started in small restaurants and hotels. Then I got the opportunity to open my own French café and charcuterie in the 1980s, called Savoir Faire, in the Yamhill Marketplace here in Portland. It did extremely well for about a year-and-a-half, and then the city of Portland decided to construct a light rail and the construction turned the whole area into a war zone. Ultimately the whole market collapsed. McCormick & Schmick’s was looking for a chef and I got the job.

Twenty years later, five or six years ago, I realized if I ever wanted to get back to my original goals, that was the time. Then the economy turned really bad for two or three years. Then in April or May of last year, I thought that maybe we were able to see an upswing on the horizon, and again I wasn’t getting any younger, and I thought if I didn’t make the leap it would never happen.

Four friends came together and backed me financially, and I told [the McCormick & Schmick’s executives] that I was going to leave. They were very supportive. They were even helping me find a place for a while.

Have you been getting good press?

Good press, bad blogs. Some of the blogs labeled me in an unpleasant fashion as having been a corporate guy for 25 years. That’s fine. People have the right to their opinions.

It’s been interesting, but not totally surprising, that my relationship with McCormick & Schmick’s was more negatively perceived by some people than I would have thought.

But you haven’t been cooking in restaurants much lately, have you?

Other than restaurant openings – for which I was fundamentally responsible for many years – my day in, day out job was at a desk. I’ve worked to get myself into shape, I’ve lost 50 pounds, and now I’m on my feet 14 or 15 hours a day. I’m not working the sauté station, but I’m very actively the executive chef of the restaurant, and it feels good. My feet hurt at the end of the day, but what are you going to do?

I’m so invigorated by this that I feel better than I have in years. It’s a little hard to explain, but it’s a function of how much I’ve wanted to do this for a very long time.

How big is your kitchen staff?

We’ve got about 24 people in the kitchen, 68 overall in the restaurant. The dining room is 140 seats, the bar is 50 and we’ve got another 40 outside. Portland has a lot of really terrific but small, boutique-y restaurants. Opening a restaurant of this size really raised some eyebrows. But most McCormick & Schmick’s restaurants are at least a third larger than this, so at no point did I think this was a big restaurant. It seemed like the right size.

Has anything surprised you in coming back to the independent restaurant world?

I have to admit there’s a pretty large generation gap. Half the people who work with me are young enough to be my kids. But I don’t feel like their father in any way, shape or form. I feel like one of their peers, albeit the owner-operator. 25 years ago I was working with 25-year-olds but I was 28 or whatever. Now I’m working with 25-year-olds and my kids are in their 30s.

And I’ve got to tell you, they’re talented. The people who are working for me are way more talented, experienced and educated than that same age group in my day, I mean by a million miles. They’ve been very gratifying to work with. I don’t have to talk down to them; I can speak to them like experienced culinary professionals. I think it’s obviously a reflection to a certain extent of the culinary culture in our country.

How did you lose 50 pounds?

I stopped eating so much. For so long I fooled myself about how much I was eating. I gained 50 pounds over 25 years. It happens so slowly and the next thing you know, you’re huge. I woke up one day and said, “This is ridiculous.” I lost the weight over 18 months and have kept it off for a while, and I’ve lost a few pounds since we’ve opened. I still like all the wrong things, but I don’t eat as much of it as I used to, and I exercise. You just change your eating lifestyle and it pays off – or at least it did for me.