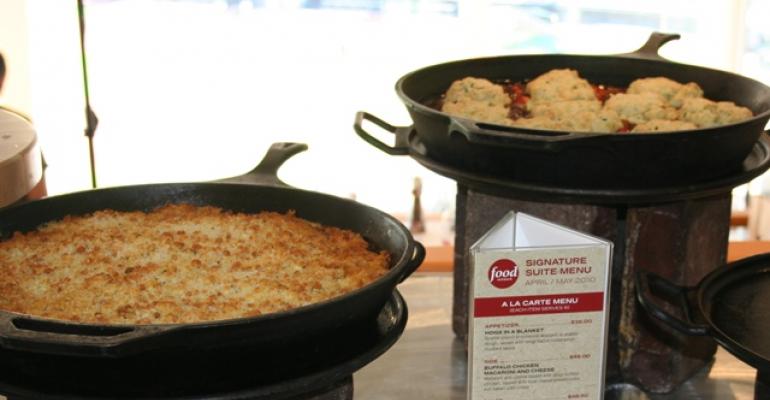 Football and the Food Network at New Meadowlands Stadium

Delaware North Cos. is betting that a partnership with the Food Network and a focus on upscale comfort food will win over fans at the New Meadowlands Stadium, home of the National Football League’s New York Jets and New York Giants.

The Buffalo, N.Y.-based on-site company, which last year won the 10-year contract to operate food and retail services at the 82,500-seat, $1.6 billion facility in East Rutherford, N.J., is gearing up to offer premium food items that feature local flavors and character, as well as comfort and value. The stadium is set to officially open when football season gets underway this fall.

To run the operation, Delaware North has brought in its Sportservice division executive chef Eric Borgia, a New Jersey native who previously ran the foodservice operation at Petco Park, home of the San Diego Padres baseball team. The company also has teamed up with television’s Food Network to develop menus that would be popular not only with suite- and premium-seat holders, but general admission ticket holders as well.

According to Charles W. Granquist, culinary producer for the Food Network, providing sports fans with their favorite foods featuring an upscale twist is a new and exciting challenge.

“We want to serve people food that makes sense within the context they’re in,” he said. “That’s the nexus of the entertainment of food. It’s a cultural experience. The fans expect to have a great hot dog or pretzel, but we want to take it to the next level. We want to offer them a little bit of luxury, value and whimsy.”

Granquist said the menus at the stadium are expected to rotate every four weeks, but one staple will be hot dogs, a must for any sports arena, he said.

“It’s all basically accessible,” he said. “We just wanted to funk it up a little bit.”

Other signature items will include such local favorites as pepper and egg sandwiches and meatball hoagies freshly prepared from a secret family recipe by chef Borgia’s grandmother.

Items will be available at general admission kiosks, concessions stands and food-court type restaurants or lounges for premium ticket holders and the stadium’s exclusive Commodore’s Club.

“The meatballs are one of our home field advantage items,” Borgia said. “It’s something new that we’ve brought to a stadium — everyday fare, stuff that people grew up eating, but are not used to having at a concession stand.”

Though he wouldn’t divulge the recipe, Borgia said that the meatballs are made from a beef, pork and veal mixture and that the chefs dip their hands in red wine before rolling the balls.

He asserted that Delaware North’s main culinary goal, once it knew it had won the Meadowlands contract, was to develop a menu of homestyle fare that would be flavorful and familiar to the fans.

“When we were awarded the contract, we collectively worked on what we could do to break it down into New York and New Jersey delicacies,” Borgia said. “We wanted to offer foods that would get people excited. We’re trying to keep it local, but not outrageously so. It’s more important to be fan friendly.”

Borgia said the egg and pepper sandwiches would be available on grill carts throughout the stadium, freshly prepared in front of customers as soon as they place their orders.

“Is it tough to do? Yes,” he said. “But when people see the eggs made in front of them, I believe they will want to wait for them to be made.”

In the premium-seating area, which feeds the occupants of some 218 suites, items such as buffalo mac and cheese, short rib cobbler and gourmet pizza, are available in a communal, food-court setting. The price for the food is inclusive in the price of the suite or premium seating.