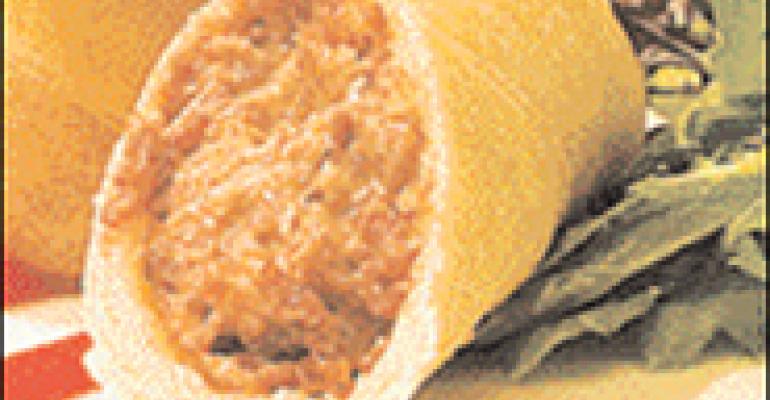 But now chefs are finding that if you combine something customers know with something else they know, you could have a real winner—especially if you deep-fry it.

And so non-Asian spring rolls are popping up all over the place, filled with Western ingredients that customers already love. They often start as experiments, such as at two-unit Davios, which has restaurants in Boston and Philadelphia.

David Boyle, the chef at the Philadelphia location, following the lead of some Chinatown restaurants, rolled the ingredients for that city’s beloved cheese steak in a spring roll wrapper and deep-fried them.

“We put them on the bar menu, and they were so successful we put them on the dinner menu,” says owner Steve DiFillippo, who charges $12 per order on plates streaked with spicy ketchup and mayonnaise.

He recently started producing them wholesale and sells them to other restaurants.

For the sauerkraut, he caramelizes Spanish onion with garlic, deglazes with red wine vinegar and then adds rinsed sauerkraut. He adds wheat beer, chicken stock, bay leaf, peppercorn, oregano and thyme and slowly cooks it for three hours.

That is added to the other ingredients, rolled and deep-fried. He sells two rolls for $9.50, and it’s the top-selling small plate in the 80-seat restaurant. “We can sell anywhere from 20 to 60 in a night,” he says. “The restaurant itself is American cuisine. We try to take food that people can wrap their arms around and identify with, and then do it with a twist.”

Dan Pogue, the chef of Grafton Street in Cambridge, Mass., takes a similar tack. He wanted to make a spring roll, “but we’re not an Asian-style restaurant, and it doesn’t really fit our cuisine,” he says, describing the restaurant’s fare as more Italian-accented American.

So instead he cooks mushrooms in mushroom stock with pieces of raw bacon. Then he forces it through a sieve, adds shaved Parmesan and wraps the mixture in gyoza wrappers. He fries them to order and serves them over tomato sauce with garlic, olive oil, fresh red pepper and some frisée.

“We sell a lot of them,” Pogue says, at $6.95 per order. He finds the smooth texture of his filling more agreeable than that of Asian spring rolls, which some times have bits falling out of them when he eats them.

Pino Maffeo, the chef of Boston Public Meat in Boston, tops $9 potato spring rolls—stuffed with mashed potatoes so they taste like a Jewish knish—with smoked salmon and crème fraîche.

In Swampscott, Mass., at Red Rock Bistro, four lobster rolls are on the menu for $18.50, including one wrapped in rice paper with Chinese vegetables, deep-fried and served with an Asian dipping sauce.

Anthony Raggiri, the chef at French restaurant Bistro 61 in New York City, brings the flavors of Marseille to his Provençal spring roll.

For that $13 dish he sautés cod fillet with salt, pepper, garlic and parsley. While the fish cools he sautés a brunoise of carrots, red peppers, celery, garlic and onions with bean sprouts in olive oil, seasoning it with saffron, salt and pepper and then finishing it with a little soy sauce and butter.

He shreds the cod, mixes it with the brunoise and rolls it in brique dough, sealing it with egg yolk. He deep-fries it and serves it with micro greens dressed with lemon vinaigrette. The plate is garnished with a reduction of soy sauce and port.

Chain restaurants also are serving non-Asian spring rolls, often calling them egg rolls instead. Both rolls originated in China, but egg rolls come from further south and normally are rolled in crêpelike wrappers. Spring rolls tend to be skinnier, enrobed in thinner skins.

Dallas-based Chili’s has Southwestern Egg Rolls stuffed with smoked chicken, black beans, corn, jalapeño Jack cheese, red peppers and spinach. The ingredients are wrapped in a flour tortilla, deep-fried and served with avocado-ranch dipping sauce. The dish sells for around $7.50, depending on the location.

Damien O’Donnell, chef of Harbor Bistro in East Hampton, N.Y., also has banana spring rolls, which he serves with rum caramel and vanilla bean ice cream and sells for $7. O’Donnell, who used to work for chef-restaurateur Roy Yamaguchi, says he was accustomed to working with Philippine lumpia wrappers when working for the founder of the Roy’s restaurant chain.

“It’s real simple, one of my easiest preparations,” he says.

He splits a banana in half and then down the middle. He sautés it with cinnamon and sugar, rolls it and fries it. The rum caramel sauce is simply a reduction of rum and sugar.

“That’s it, and it’s probably one of our top-selling desserts,” he says. “People are just eating them up.”

He cautions, however, that sweet spring rolls should be rolled in paper towels after frying to remove any excess fat.

“Oil’s not too fancy with dessert,” he says.

More non-Asian spring rolls are in the works. Myles Romanow, owner of Wildthyme Restaurant and Bar in Southampton, N.Y., is currently working out the kinks for a Kobe beef hot dog spring roll.

The idea started when Romanow got a shipment of the hot dogs to experiment with. He threw one on the grill while the restaurant was really busy and ended up charring it. One of the cooks suggested he try deep-frying it for 30 seconds instead.

The first experiments were hot dogs with onions, lettuce and julienne carrots and endive, wrapped in spring roll wrappers and deep-fried.

“They actually were pretty good with the chipotle aïoli we serve with the calamari,” he says.

If it does make it onto the menu, Romanow says he probably will charge around $10-$14 for an order.