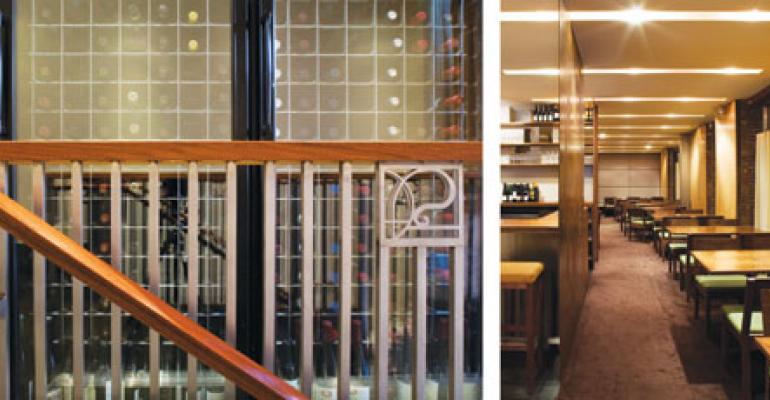 Dovetail aims to highlight the food, not a showy atmosphere

Various audio-visual and tactile elements inform a dining experience, and designers like to push the envelope to create compelling restaurant atmospheres that sometimes overshadow the cuisine.

But when it comes down to brass tacks or brass sconces or 17-foot-marble tables imported from Italy, the core of a restaurant is its food, and everything has to reflect that, designer Richard Bloch believes.

At the restaurant Dovetail in New York, Bloch eschews fancy design elements and keeps the decor as simple and unobtrusive as possible to focus attention exactly where it belongs: on the plate.

“You have to eat the food,” says Bloch, a New York-based architect and designer specializing in foodservice and hospitality. “That’s what [the chef] is about. It’s who he is.”

Bloch’s clients include the Plaza Hotel and world-renowned restaurants like Le Bernardin and Masa in New York and the upcoming Masa in Las Vegas. When he began working on Dovetail, on Manhattan’s Upper West Side, the first thing he did was taste chef and first-time owner John Fraser’s cuisine.

“The first thing I saw in it is that his food looks really quite simple,” Bloch says. “There’s a lot of classical cooking and fresh ingredients. It has a slight feeling of California in it. But it’s really quite complicated. There’s a lot going on in there; it just doesn’t look like there’s a lot, and I like that.”

To mimic the impression he got from Fraser’s cuisine, Bloch brought in a variety of materials and then hid them in a subtle, understated design.

“We used a lot of different materials,” he says, “but the place doesn’t look it.

“For such a small restaurant there’s brick, carpet, raw steel, fabric, paint, stainless steel, marble and two different shades of wood,” he continues. “But if you go into the restaurant, you don’t think of it as being a big presentation with all these materials being thrown at you. It’s subtle.”

The “invisible” design was one of Fraser’s requests when he approached Bloch about the project. Fraser, who previously worked at The French Laundry in Yountville, Calif., and Compass in New York, said he wanted decor that looked intentional and obviously designed, but with a softness around the edges to make the experience more organic and less theatrical.

“We wanted a very simple, clean space that wasn’t a muscular design,” Bloch says. “We wanted a clean background that would put the focus on the table-top, not on decorative elements.”

Dovetail showcases few objets d’art to speak of. Even the lighting steps back into recessed troughs in the ceiling to illuminate the food without any distractions. Aside from the warm tones of the bare-wood tables and exposed-brick walls, the only splash of color in the dining room comes from the apple-green seats of the chairs.

It takes a lot of effort to make a design this painstakingly unobtrusive yet comfortable and elegant, Bloch says.

“We were toying around with some tracery for the door, and I came across an old art deco iron piece,” he says. “We liked it very much, but it wasn’t right for the door. But we had this lovely stainless-steel handrail that was just beautiful, but really hard to make. It’s only about half an inch thick; it’s like paper. And the balusters—the vertical parts of a handrail—were really close together because it had a certain character, but it needed to be broken up. We needed something a little quirky and whimsical, which is what John really likes too, so we took the original art deco piece, and we cut it in half and welded that right to the handrail.”

The swirly, art deco element became an inspiration point in itself, Bloch says. It even inspired the Dovetail logo, which has similarly curving legs on its “V.”

When Dovetail opened last December, it received several rave reviews from food critics, including a three-star review from Frank Bruni of The New York Times.

Bloch said he particularly liked the review by Bruni because he seemed to understand the restaurant in the same way its designer did.

“[The review] was a rave about the restaurant, but not necessarily about the design. But he said one thing that made me overwhelmed with joy,” Bloch recalls. “He said the decor allowed you to focus on the food, and I took that as a great compliment. That’s exactly what we wanted.”

Bruni wrote, “The inconspicuousness of the restaurant’s entrance may be bonkers or in fact brilliant, a subtle signal of Dovetail’s confidence in its inner strength.”

As much as they wanted an awning to give cover for guests in bad weather, the landmarks authority wouldn’t allow one. Bloch and Fraser had a hard time convincing the Landmarks Preservation Commission to approve a glass and steel door for Dovetail. So Bloch’s crew went out around the neighborhood taking pictures of glass and steel doors to show the commission that their design would fit the neighborhood.

“It’s a glass and steel door that’s very simple,” Bloch says. “It isn’t tracery steel or anything fancy. It’s the kind of thing you might have seen in the ‘20s or at the turn of the [last] century.”

There are still some things Bloch says his team was unable to control, however.

“I wish we could control the level of the sound better,” he says. “We tried. Everyone wanted a wood floor, but I talked them into carpet because it was just too hard. Part of [the problem] is the size. When you have that many people in a room that size, you’re limited in what you can do.”

However, as the architect, Bloch offers some insider information about the best seats in the house.

“Some areas are much more quiet than others,” he says. “I know the secret areas.”

The no-longer-secret areas are in the back, where bench seats with 8- to 9-foot backs upholstered in a subtle, striped fabric imported from Denmark dampen the noise.

As Dovetail approaches its one-year anniversary, Bloch and Fraser have plans to augment its design, stopping short of an overhaul, however.

“We want to add little things,” Bloch says. “We’re just going to quietly add a little detail here and there to soften the place up. We don’t want to fill the place with flowers like a funeral home, but we want to add a few things, maybe some sculptures or objects in the window wells. But we’d never want something that distracted from the simplicity of the design.”