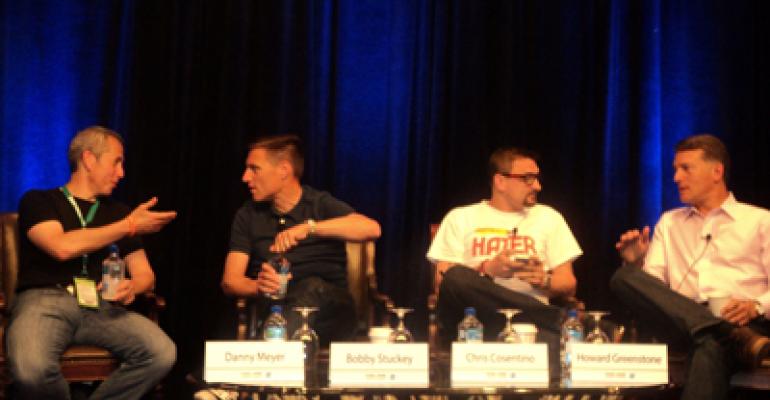 Cultivating loyalty, one customer at a time

One of the keys to running a successful restaurant is building a roster of regular patrons, and you have to do that one customer at a time, according to the experts who participated in a panel on cultivating loyalty at the American Express Restaurant Trade Program at the Food & Wine Classic in Aspen.

“At the end of the day, it’s about creating guests for life,” said Howard Greenstone, chief operating officer of the New York-based Rosa Mexicano restaurant chain. “You have to listen to what that guest says, whether it’s positive or negative, and do whatever it takes to get them to come back as a guest.”

The Food & Wine classic seminars can be viewed in their entirety at restaurantbriefing.com

Danny Meyer, head of the Union Square Hospitality Group in New York, said people like to be treated like you’re on their side. Although people might forget the details of a restaurant experience, “I don’t think you ever forget how someone makes you feel,” he said.

Bobby Stuckey, partner in Frasca Food and Wine in Boulder, Colo., said that convincing difficult guests that you have their interests at heart can create the most loyal patrons.

“Unsatisfied people are the easiest people to make guests for life,” he said.

The key is training your staff to look at guests’ faces and body language so a manager or owner can find out what’s wrong, empathize with them and fix the problem.

“Then you can turn around and have an apostle,” he said. “Listening is an underrated skill in the restaurant industry.”

Chris Cosentino, chef-owner of Incanto in San Francisco, which specializes in organ meats, said he has a problem with customers’ misperception of the restaurant.

“We’re known as a meat restaurant, but we’re majority vegetable-based,” he said. So he has to work to make sure that those who aren’t hard-core offal eaters also feel at home.

One way he makes sure that the restaurant’s food is well explained is by having one cook work in the front of the house during each shift.

That cook is an extra set of eyes and ears from the kitchen’s perspective, which helps Cosentino know about a potential problem before it becomes an actual one.

“I’d rather address that problem right at the moment rather than deal with an angry letter a week later, or a post [online] about their experience,” he said.

As the discussion shifted to social media, Meyer said, “This is a high-touch business, not a high-tech business.”

But he acknowledged that tools such as Twitter can be handy.

Although Meyer said he had been using Twitter for only about three months, he experimented by betting on the horses right before the Preakness Stakes on May 21.

He tweeted that if Shackleford won, he would give away free custard at Shake Shack.

May 21 was also the day that one much-publicized preacher predicted that the world would end. When Shackleford did win, Meyer said he tweeted: “Shackleford wins, world didn’t end, custard offer stands.”

Meyer said he gave away 750 custards that evening.

The upshot was that the Wall Street Journal wrote about the tweet and Meyer ended up meeting Shackleford’s owner.

Cosentino said he tweets between eight and 15 times a day, except during extremely busy times, and tries to answer every reasonable response — not those that are crude or nonsensical.

He said Twitter gives him instant reaction and, with some 80,000 followers, it’s a useful way to promote specials.

“I did a molasses-cured Arctic char, tweeted about it, and five people came in that day and ordered it,” he said.

Once a customer suffering from kidney failure tweeted to ask him if he could make a no-sodium meal, allowing him to simultaneously provide special service and cultivate a loyal patron.