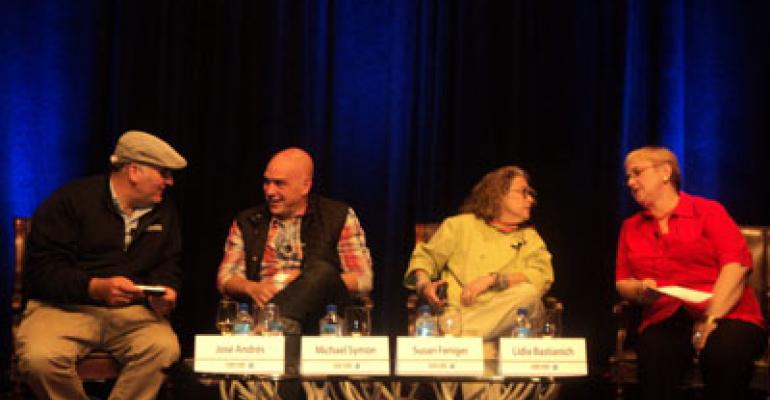 As food trucks proliferate and restaurateurs explore new ways of getting their food in front of customers, four of the country’s most successful chefs sat down at the American Express Restaurant Trade Program Food & Wine Classic in Aspen, Colo., for a discussion on new delivery channels.

The panel members also shared their insights into the American diner’s psyche.

Participating in the discussion were José Andrés from Washington, D.C.; Lidia Bastianich of New York; Susan Feniger of Los Angeles; and Michael Symon of Cleveland. The panel was moderated by Chicago TV personality Steve Dolinsky.

The seminar can be viewed in its entirety at restaurantbriefing.com. Key takeaways can be found below.

“We do tons of weddings off the truck,” she said, noting they can serve tacos, Peruvian ceviche and churro tots to as many as 800 guests at a wedding, with six employees working on the truck.

“As they drive down the freeway, they’re an amazing marketing tool,” she added.

“It’s really not about going in front of an office building where there’s 15 other trucks,” she said. Instead, they go to festivals such as the Art Walk in downtown Los Angeles.

“Aramark understood that better than we did,” Symon said. The onsite feeder helped streamline the menu to offer fewer options and advised staffers no longer to ask customers what temperature they wanted their burgers. In addition, the B-Spot staff learned to start cooking as the lines formed by taking a headcount of customers and anticipating how many burgers they’d need.

Lidia Bastianich, who partners with son Joe Bastianich and Mario Batali, opened Eataly, a 50,000-square-foot retail and dining venue with seven restaurants and a beer garden: “What we created and didn’t plan was that it became a social phenomenon somehow. People feel like they’re in Italy. They can have an espresso, they can have a gelato. They can spend $1.50 or they can spend $40 for a steak. … [They] can go to a restaurant, get a glass of wine, get a shopping cart and shop around. This is civilized.”

Bastianich also commented on how people’s mindset changes when they’re eating a meal. “When you’re sitting at the table and you’re eating, your defenses are down. While taking in that food you are open to anything else. Why do you have a business lunch? As a business owner, that’s extremely important,” she said.

Andrés, who operates multiple-concept Bazaar in Los Angeles: “People are looking for experiences beyond eating. They want to feel like they are transported somewhere else. That’s why I opened Jaleo [in Las Vegas]. I put a fire pit in the middle of the dining room, which is very astonishing. I had the fire marshal eating there every day.” These places are successful “because people feel they are moving away to somewhere else.”