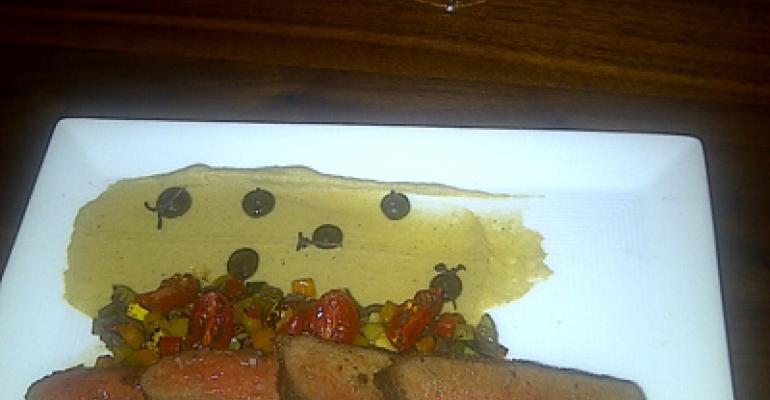 Culinary innovators experiment with the use of ash in dishes

Burning food to cinders is widely considered a mistake when cooking, but ash is being used as a flavoring these days by a number of cutting-edge chefs.

At Aquavit in New York City, chef Marcus Jernmark uses hay ashes to add a smoky depth to some meat dishes. The ash comes from hay that he burns to smoke sweetbreads. Jernmark, who previously worked as the chef at the Swedish Consulate in New York, is one of the members of the New Nordic artistic school of chefs.

René Redzepi of Noma in Copenhagen, cooks with ash in a couple different ways in his cookbook “Noma: Time and Place in Nordic Cuisine,” which Phaidon published in 2010.

He grills leek tops until they are “completely dried and burnt,” pushes them through a sieve and then coats boiled leek hearts with it.

For a different dish, he takes a couple of pounds of hay and sets it on fire in “a big fireproof container.” He lets it burn for two to three hours and then passes it through a fine cloth or sieve. He rolls boiled leek hearts in that, too.

This past spring, Anthony Goncalves, executive chef of 42, a restaurant at the Ritz-Carlton in White Plains, N.Y., burnt ramps using the same method as Redzepi. He used the ashes to coat house-made salt cod, which he served with non-burnt ramps, scallions and ginger.

Ash has had its place in food for centuries. Mexican food expert Zarela Martinez, former chef-owner of Zarela in New York, pointed out that it is used to make nixtamal, which is corn that’s treated to remove the outer skin and then used to make tamales. Burnt, powdered seeds are also used to make a variety of moles.

Celebrity chef and former Top Chef contestant Angelo Sosa used ash in a dish he cooked earlier this year at the James Beard House. Inspired by the deep char on meats Sosa experienced during a recent visit to Istanbul, he used the skin of roasted eggplant for a sous-vide lamb dish.

Normally, Middle Eastern cooks char eggplant and use the cooked flesh to make babaganoush. Sosa did that, but he also used the charred skin, which he blended with oil and salt, to make what he called “ash purée.” He put dots of that purée on the babaganoush and served that with lamb that he slowly cooked in sous-vide.

The charred eggplant was meant to simulate the char that was missing from the slow-cooked lamb, he said.

“That comes from my food fetish of the char of meat in Istanbul,” Sosa explained.