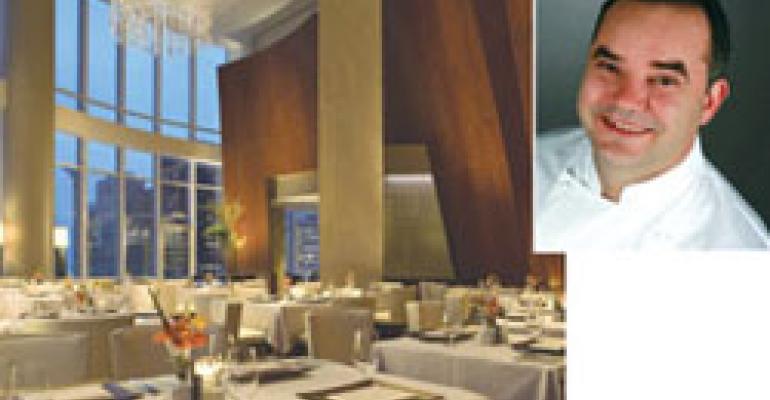 Chef at Chicago’s Sixteen sets sights on towering sales, armed with a mixed and matched medley of modern cooking appliances

Boasting priceless views of the Chicago skyline and Lake Michigan and propelled by a formidable kitchen equipment package, Sixteen in the new Trump International Hotel & Tower Chicago is poised to be a major player in two culinary realms: fine cuisine and upscale banquets.

Although the tower of polished steel and iridescent glass is a work in progress—indeed, it’s a construction site—as it climbs toward a destined height of 92 stories when completed next spring, Sixteen, the signature restaurant on the sixteenth floor, is already reaching stride.

Australian chef Frank Brunacci, spurred by the high expectations of the Trump Organization and the talents that have won him accolades in high-end resort and hotel kitchens, aims for Sixteen to compete with local gastronomic hot spots like Alinea, Avenues and Moto, as well as vie for the banquet trade.

“There isn’t a place that can offer what we can,” he said. “It’s the best space in Chicago for banquets.”

However, tackling those ambitious goals has meant putting his own stamp on a kitchen equipment package that was largely in place before his arrival.

“I got a big chunk of change in [operating supplies and equipment budget], close to half a million dollars just in kitchen equipment,” Brunacci said.

One of his first moves was to swap three convection ovens for Rational combi oven-steamers, which cook via hot air, steam or the two combined. The devices are especially useful for banquets because they allow much of the prep work to be done in advance for parties, which are as large as 300 guests. The combis have mobile plate racks that can be loaded with plates of par-cooked and chilled foods kept in the cooler until service, when they are put into the combi and quickly finished. It’s far faster and more labor-efficient than the hurried assembly-line style of plating a banquet with a platoon of cooks.

Perhaps the biggest adjustment he has made is to the bi-level kitchens. Sixteen’s foodstuffs are prepped a floor below in a large prep kitchen and ferried up the elevator before service. They are finished to order in the restaurant’s own kitchen, which is equipped with two Jade cooking suites with built-in planchas and French-top heating surfaces. The elevator trips are time consuming, but Sixteen is making it work.

“I think we get better at it every day,” Brunacci said.

Brunacci favors the plancha, a superhot direct-cooking surface, for cooking scallops because of the “unbelievable” results. It also gets a workout on a variety of breakfast and lunch items.

Also in good use in the Sixteen and banquet kitchens are standard high-volume cooking pieces like steam kettles and tilting skillets. The latter in particular shine for items like corn tortilla soup and Jerusalem artichoke purée, Brunacci noted.

The strong initial performance has buoyed Brunacci in his quest to make a name in Chicago dining with Sixteen.