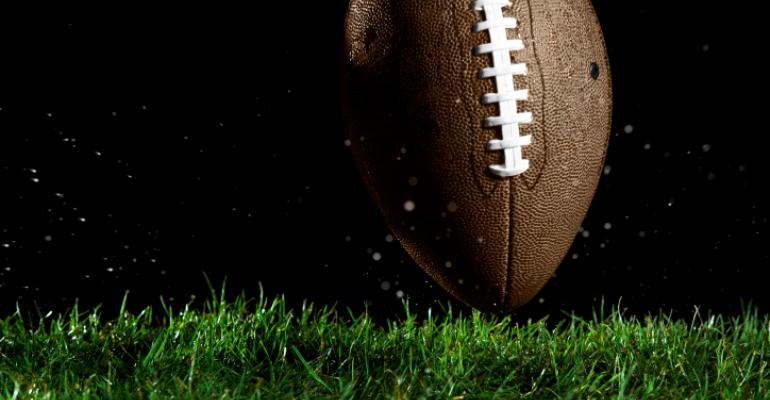 Papa John's, Buffalo Wild Wings, Hooters get in the game

With its Ultimate “Fantasy to Reality” Experience, Papa John’s International Inc. said Monday that it is looking for the fantasy football league that’s better than the rest. Beginning Sept. 9, the day the regular season of the National Football League kicks off, Papa John’s will invite the estimated 27 million fantasy football players worldwide to visit the chain’s website or Facebook page to share why they think their fantasy league outshines all the rest.

The contest’s winners will receive a trip to the 2011 NFL Draft in New York City, and a concurrent sweepstakes on Papa John’s Facebook page will provide another winning group free pizzas in time for kickoff on Sept. 9, to be delivered by former Minnesota Vikings all-pro receiver Chris Carter.

“Beginning with fantasy football drafts this month all the way to the NFL Draft next year, Papa John’s will be providing fans with opportunities to make the football season better than ever,” said Andrew Varga, Papa John’s chief marketing officer. “Football has always been central to Papa John’s, which was the official pizza sponsor of Super Bowl XLIV in February. We believe that the sponsorship was a major part of the equation leading to our best sales day ever. With this year’s fully integrated official pizza sponsorship with the NFL, no one will benefit more than fantasy football players.”

Papa John’s also will provide special badges on its Facebook page that fantasy football players can give to members of their leagues for “Better Smack Talk,” “Waiver Wire Wonder,” “Whiner of the Week” and other weekly honors.

The brand has several other ways for its guests to join in, including a new Pick ’Em Challenge, where each week customers are invited to pick winners of all the NFL games. The player from each location with the most correct picks is entered into a contest where he or she can win a trip to Pasadena, Calif., to play in a flag football game at the Rose Bowl. The teams will be led by former pros Jerry Rice and Deion Sanders and coached by ESPN personalities Mike Greenberg and Mike Golic.

Restaurants not organizing a fantasy football league or contest still can cater to football fans by hosting draft parties, complete with free Wi-Fi for drafting teams and food and beverage specials, in addition to private-party space at certain locations. Many chains are bringing fantasy players in for their draft night and enticing them to return during the season with gift cards.

Buffalo Wild Wings, for instance, provides groups with $100 in gift cards as well as a draft kit containing a championship pennant, beer koozies, a draft board, and player stickers.

Hooters also is giving away draft kits to groups of fantasy players coming into its restaurants to pick rosters. The kits include stickers, a draft board, a fantasy cheat sheet, and “season ticket” coupons worth $500. The casual-dining chain said it expected to host 25,000 draft parties between now and Sept. 9.

“Over the past five seasons Hooters has become America’s most popular site for fantasy football leagues to host their annual drafts,” said Mike McNeil, Hooters' vice president of marketing. “With free Wi-Fi, great food and fun, and of course the favorite fantasy football cheerleaders, the Hooters Girls, no location offers more benefits.”

The chain also is running the Big Game Giveaway this year, a sweepstakes that provides round-trip airfare and two-night hotel accommodations to Dallas for the Super Bowl next February. The winner and a companion also will get to attend a VIP party that weekend at Hooters.

Entertainment and dining concept Dave & Buster’s partnered with CBSSports.com for its promotion with fantasy players this year. Any group that books a draft party at Dave & Buster’s through the chain’s special-events department will receive 50 percent off the cost to create a fantasy league through CBSSports. In addition, the group gets 10 percent off food during its draft event, as well as a free draft kit and a $20 Power Card for the party’s host.

Members of Ruby Tuesday’s “So Connected” e-mail club who identify fantasy football as one of their main interests will be entered into a sweepstakes for such prizes as iPads, 46-inch LCD high-definition TVs and Ruby Tuesday gift cards. Most locations of the chain will be able to show any game on DirecTV’s NFL Sunday Ticket package and will offer various deals on food and drinks.

T.G.I. Friday’s also wants to entice fantasy fans with special offers and game broadcasts, and individual restaurants are marketing their deals on their locations’ Facebook pages. One unit in Wilmington, N.C., is offering football fans half-price appetizers at the bar and free Wi-Fi for leagues to draft their rosters, while another Friday’s in Eden Prairie, Minn., offers happy-hour pricing during fantasy draft parties as well as $10 gift cards redeemable for future visits to each player.