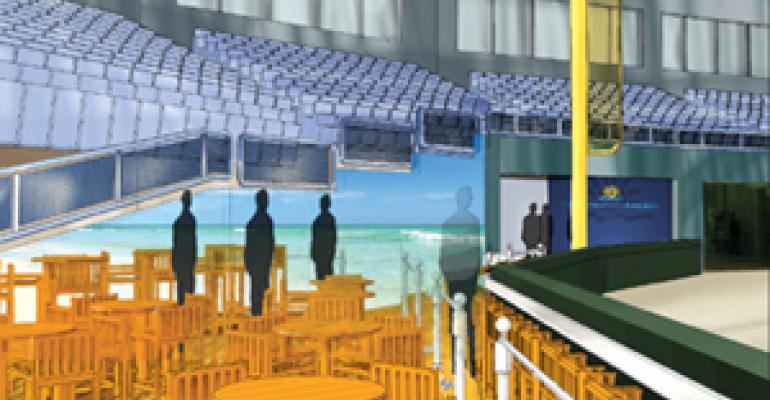 Centerplate swings for fences with ballpark upgrade in Tampa

STAMFORD, CONN. Centerplate Inc., the sports and entertainment catering and concessions specialist based here, has completed a $900,000 overhaul of its foodservice operations at Tropicana Field, the home park of Major League Baseball’s Tampa Bay Devil Rays in Tampa, Fla. —

The renovations, part of an $8 million facelift for the ballpark financed by the team, were done during the team’s offseason and include updated seating and concession areas as well as new menu items and a merchandise store that reflect the team’s history and the local cuisine. —

Among the upgrades is the new Sand Bar Bullpen Beach, a party area behind the visiting team’s bullpen, where fans are served specialty cocktails, such as margaritas and mojitos, in an upscale beach resort decor. —

Another addition is Right Field Street, an interactive concessions area steeped in the history of baseball over the past 100 years that features the stories of key players and teams from different eras. —

Concessions stations on the stadium’s main concourse also have been upgraded, including the Beers of the World stand, which has been transformed into an Old World-style pub. No food items are offered there, but beers from around the world are sold by the bottle or can and are priced between $6 and $7 each. —

New menu items at the ballpark include a grouper fillet sandwich with citrus mayonnaise; whole turkey legs; a steak and asiago panini; a turkey and pesto panini; and the new Sting ’em Dog, a hot dog piled with spicy chili and shredded Cheddar cheese. —

According to David Urso, regional vice president for Centerplate, the Sting ’em Dog is the result of an elaborate survey conducted during the offseason. —

“We pretty much used the entire offseason polling season ticket holders and doing taste tests with the team’s staff members and our staff to come up with their favorite hot dog,” he said. “We had so many concoctions, it’s hard to know exactly what came in as a close second. We probably had a list of about 30 names and as many variations that you can think of. And in many of the places where we sell the Sting ’em, we also sell our Top Dog, which is a branded concept. It is a hot dog with virtually any kind of topping you could want.” —

Urso said the hot dogs are priced at approximately $5, depending on the topping, and the panini sandwiches range from $7 to $10. —

Tropicana Park, originally built in 1990 for approximately $138 million, initially was upgraded in 1998 for about $70 million when the Devil Rays became the last expansion team picked to play for Major League Baseball, Urso said. —

“We’d been in the stadium for 10 years; it’s the 10th season the team has been playing here,” he said. “After a while it started to looka) a little bit worn and b) not as current as it needed to be. We started last year by installing new POS systems that take credit cards, and we redid, rebranded and redecorated about 60 percent of all the concession stands in the building. And as the year goes on, we’ll continue that process until they’re all done.” —