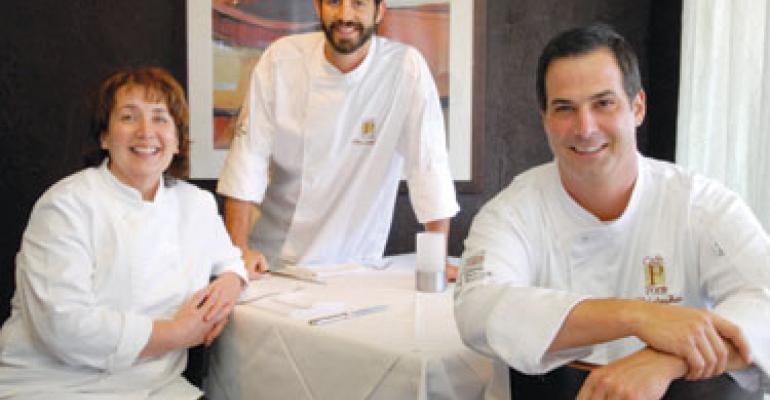 In 1989, chef Chris Ponte was working as a sous chef at The Pepper Mill Restaurant in Clearwater, Fla. One of the regulars was a retiree named John Manning who always requested simple meals, such as clear broth and unseasoned fish. Some chefs will tell you that catering to special requests can mean a lot of extra work, especially in a busy kitchen, but Ponte chose to treat this guest with kindness.

“We became friends, and I started making his dinners as special as I could,” he says.

Today, six years into ownership of the successful Cafe Ponte in Clearwater, Ponte tries to pass along the lesson learned from that experience.

“I tell my chefs that you never know who is going to be sitting in the restaurant,” he says. “I just went the extra distance to give people exactly what they wanted. I wasn’t thinking that the opportunity of a lifetime would be the result.

“When special orders come in, some kitchens start screaming and yelling. My kitchen is like, ‘I’ll do it.’ It’s an opportunity for somebody. That’s why we’re in the business: to make people happy.”

According to those in the Clearwater area, Ponte is making that kind of mark. Chris Sherman, the food and wine writer for the St. Petersburg Times, says: “Chris’ arrival here six years ago was a watershed event for this area. He brought in the finest contemporary cooking that we’d ever had.”

Sherman, who is also the restaurant editor for Florida Trend magazine, adds, “He found a small spot in Clearwater and immediately made it exceptional—very sleek and tasteful, elegant and yet not stuffy.”

He adds: “I’d say Chris is among the three top chefs that everyone talks about in the entire Clearwater-Tampa area.”

Tom Pritchard, chef-partner of the Salt Rock Grill in nearby Indian Shores as well as several other area restaurants, says that when Ponte opened his restaurant, “he had the most innovative presentations of anybody in this town.” Today Pritchard visits Cafe Ponte at least once every few weeks.

“I stop in the bar and spy on what he’s doing and have a glass of wine,” he says.

Born 40 years ago in North Dartmouth, Mass., Ponte has been cooking and working in restaurants since he was 16. Ponte earned an associate’s degree in culinary arts from Johnson & Wales and then a grand diploma from Le Cordon Bleu in Paris, where he finished at the top of his class.

He concluded his education with an apprenticeship at Taillevent, a three-Michelin-star restaurant in Paris. Ponte accepted a job as personal executive chef for New York entrepreneur Leon Black. On the weekends, he would take unpaid apprenticeships with some of New York’s most critically acclaimed chefs, including Daniel Boulud.

“Working with Daniel at his restaurant in New York City really opened my eyes to how detailed things needed to be to execute perfect food,” he says. “I think Daniel could cook a shoe and make it taste good.”

At the 250-seat Cafe Ponte, no one is cooking shoes, but they are serving some of the area’s finest French, Italian, Asian and contemporary American cuisine, critics say.

“His soups and sauces are terrific and show signs of his French training,” Sherman says. “The truffle mushroom soup has been on the menu from the beginning, and it’s fabulous.” Sherman also applauds Ponte’s staff.

“He had to start from scratch and has done a tremendous job,” he says.

Chef de cuisine Christopher Knowles, who has been at the restaurant for almost three years, says: “Chef Ponte gives me a lot of creative freedom. We pretty much go over the menu and try to come up with ideas together. He lets me in on that.”

Remembering his own mentor’s generosity almost 20 years ago, Ponte says he tries to open doors for his people. Not long after hiring Knowles, he sent the young chef to Italy to train for six months.

In praising Ponte’s focus, Pritchard called him “a working animal.”

As Ponte tells his chefs, “The toughest part is the daily grind, but I always try to do something to push the envelope.”

As a chef and owner, Ponte realizes that you can’t push the envelope so far that you push yourself out of business.

“We want to do molecular cooking,” he says. “You can be excited about things, but ultimately it’s a business.”

Ponte says that one of the biggest challenges is getting customers to understand the value of what is being done at Cafe Ponte and why they spend more money there.

Although he has a kitchen staff of 10, Ponte still cooks. But six years of ownership have taught him that a business owner can’t spend all of his hours in the kitchen.

“I have to make sure the front-of-the-house is feeling good, that payroll is okay, that things are going well in the kitchen,” he says.

As the owner, it falls to Ponte to fix things or have them fixed. Over a recent weekend, he was laying tile on the restaurant floor. He was also on the roof changing the belt on one of the fans.

“I don’t think people realize that when you own your own place, you have to be able to do everything, and you have to do it for the right reason,” he says.

And the right reason, he says, is “to give people a dining experience they will remember.”