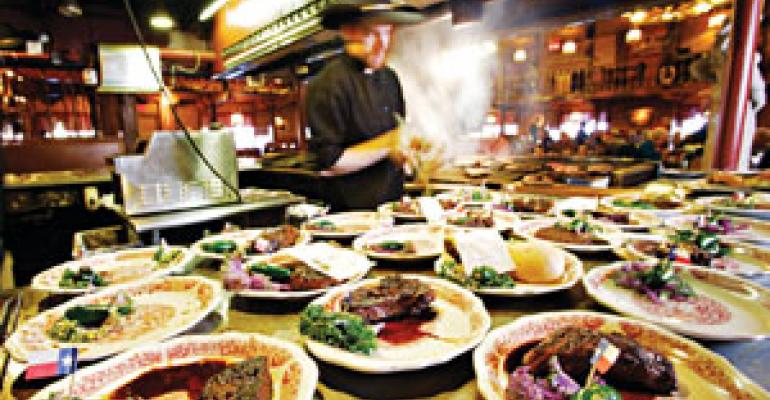 The Big Texan Steak Ranch, located along the legendary Route 66 in Amarillo, has become an icon in Texas because it is Texas to generations of cross-country travelers.

“We’ve been very fortunate that the Big Texan has always been a phenomenon,” said Bobby Lee, the son of founder R.J. “Bob” Lee. “We grew up in the carnival business so it’s perfect; this is all we’ve ever known.”

Big Texan is known for many things, not the least of which is steaks grilled over an open flame and a 72-ounce steak dinner that is free if eaten in one hour. A big part of what makes the 650-seat restaurant what it is, apart from the hoopla, is simple geography.

“Amarillo is dead center of the Texas panhandle, so it’s got a mystique,” noted Bobby Lee, who owns the place along with siblings Danny Lee and Diana Lee-Magill. “For so many people going east-west this is the only shot of Texas they ever hit. If you’re going to Hawaii you expect to see girls in grass skirts. If you come to the Texas panhandle you expect to see cowboys on horseback and big steaks, so it plays up to the belief and mystique that there is a place like this.”

Fully 75 percent of customers are tourists. The property also includes a 54-room motel as well as a 28-stall “horse hotel” for people driving cross-country with horses. Local riding and polo clubs also use the horse hotel.

Fire destroyed most of the restaurant in 1976, but it hardly seemed to skip a beat. To keep the 50-year-old restaurant fresh, Bobby Lee said, “you’ve got to push the reset button every morning and come up with new, catchy gimmicks to sell food and beverage with. It’s a three-ring circus here, it really is. It’s not a quiet evening. It’s loud, boisterous, everything you’d expect from a cross between a Sunday church revival and a P.T. Barnum circus.”

Gary Molberg, president and chief executive of the city’s Chamber of Commerce, agrees.

“Big Texan is a huge attraction for Amarillo,” he said. “I don’t believe I’ve ever gone on vacation anywhere in the United States where, when I tell people where I’m from, they don’t say, ‘Hey, isn’t that the place with the free big steak?’ They get tons of visitors every year, they do a great job of marketing the place, and it’s just an absolute goldmine for Amarillo.”

Meat and potatoes are key to the restaurant’s longevity, Bobby Lee said.

“It’s funny,” Lee noted. “We see a lot of things in y’all’s magazines about trends and food types and popular dishes and the chefs who do all these fancy foods. But really, our concept goes back to the steak and potatoes and things John Wayne would have eaten around the campfire. We have the original menu up on the wall, and actually there isn’t a whole lot of difference between it and what we have today.” A couple of salads have been grudgingly added, he continued, “but for the most part when people come in they want the Texas experience.” The average per-person tab at dinner is $27, with two and a half table turns per night.

Beth Duke, an Amarillo resident for all of her 55 years, got to know Big Texas founder Bob Lee and his family well during her three decades reporting on Amarillo for one of the local newspapers. She now serves as executive director of Center City of Amarillo Inc., a nonprofit organization charged with overseeing the city’s downtown revitalization program. “I love the place, and the family,” she said.

She calls Big Texan “an international icon because it captures the spirit of Texas. It’s big — big promotions, big events, big steaks, and the kind of cowboy heritage that people want to see when they come to Texas.”

Greg Rohloff, an editor with the daily Amarillo Independent, highlights what he calls the Big Texan’s “wow aspect,” which he said includes “seeing all the different states represented by the license plates in the parking lot, the entertainment aspect of the meal, the Western-style costumes the waiters and waitresses wear, the old wooden-plank floor that reminds you of the old saloon-type atmosphere. And then when you sit down you watch the musicians, the fiddle players, the guitars and western songs, plus the wait staff.”

For travelers, Bobby Lee said, “It’s really not about the destination, it’s about the journey. Three generations of east-west travelers across the country have come to expect it. We see grandparents come in with their grandkids saying that they used to come here when they were kids.”

To celebrate its 50th year in 2010, Big Texan will be home to a world championship sanctioned steak-eating contest in conjunction with the International Competitive Eaters Association on April 10. This summer, it will turn one of its banquet facilities into a “teepee village.” The reason? “It goes with the cowboys and Indians theme,” Lee concluded. “It’s what you’d expect to see. Again, it’s a circus we run here.”