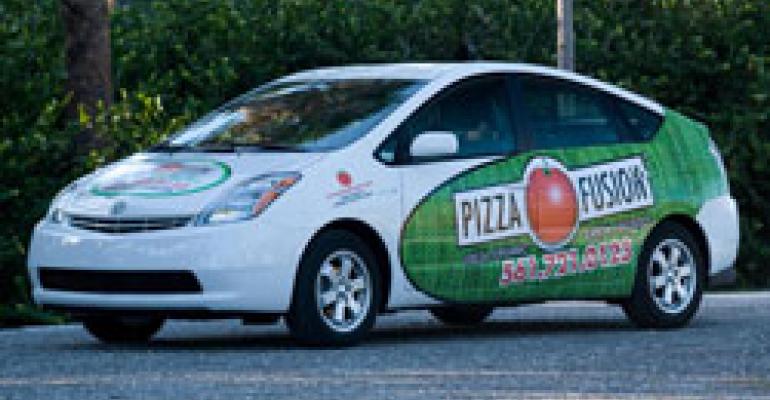 Being green from the get-go

FORT LAUDERDALE Fla. It began with a new take on a popular food.

Thinking about starting a business two years ago, Michael Gordon and Vaughan Lazar tossed around the idea of an organic pizza restaurant.  Gordon struck on the idea of delivering the pizzas in a hybrid vehicle.

“It started with those two elements,” said Lazar, the CEO of Pizza Fusion, based here. “We thought food is the best way to create the most impact. Everyone loves pizza.”

Pizza Fusion has since sprouted into a chain that is making waves for its commitment to the environment. The fledgling company, whose motto is “Saving the Earth, one pizza at a time,” plans to continue growing by building units that earn LEED certification — designating Leadership in Energy and Environmental Design — from the U.S. Green Building Council.

“The advantage that Pizza Fusion has is that they are new,” says Justin Doak, retail section manager for the U.S. Green Building Council. “They get to start fresh and build sustainability into everything that they do.”

That sustainability includes everything from recycling heat from the ovens to heat water to crafting bathroom sinks from bamboo to insulating the restaurants with recycled blue jeans.

“It’s almost been a game — who can come up with the next idea?” Lazar said. “It’s pushed us to be more earth-friendly.”

Lazar noted that the company didn’t start out with the idea to go green. It evolved slowly, starting with its first restaurants in Deerfield Beach and Fort Lauderdale, Fla. The company now has two LEED-certified restaurants in Florida, in Weston and Palm Beach Gardens, and has established relationships with national suppliers and manufacturers.

“We weren’t stereotypical tree huggers where we wanted to build the store from the inside out,” he said. “We wanted to add better choices in the store.”

“The end game was it has to be relative,” said Gordon, who is Pizza Fusion's chief operating officer. “There has to be a cause and effect. It has to be profitable.”

And it may be heading in that direction. A recent electric bill for one 1,200-square-foot store came to $800. The return on investment from green initiatives was 25 percent, Gordon estimated. Water presented an even bigger savings.

While the company’s start has been encouraging, the proof may be in the rollout. The restaurant chain has an ambitious agenda. Since opening its four stores in Florida, a Pittsburgh store that will be the prototype for future stores is set to open in a few days. A San Diego location is slated for May. Several more are expected to open just this year. The company has sold more than 60 franchises throughout the United States. The founders credit partner Randy Romano for the rapid growth.

One of the biggest challenges in opening a store is finding the right people to work on the projects, Gordon said. Many architects, contractors and others are not fully up to speed to the environmental movement yet. And many charge high prices even though they don’t have the expertise, he added.

Complying with LEED's benchmark for the design, construction and operation of high-performance green buildings requires a new approach to construction. Based on a point system, the designation involves meeting a range of criteria, including water savings, energy efficiency and the use of renewable materials.

The price of LEED certification depends on the project. Registering costs $450. Then it could cost another $1,000 to $2,000 depending on the detail involved, said Doak of the Green Building Council.

“It’s not that LEED is hard,” Doak said. “LEED requires that teams interact in a way that is different than in the past. With LEED you have to participate as one big group.”

“It keeps you on your tiptoes, but it’s all for a good cause,” said Cesar Conde, owner of Casa Conde, a design firm in Fort Lauderdale. The firm works with Pizza Fusion franchisees on the LEED certification process.

Getting started, all franchisees receive a 320-page guidebook from Pizza Fusion.  To make sure that restaurants are following the strict LEED guidelines, franchisees have to submit receipts when purchasing building materials from a supplier.

“As a corporate entity we have to keep control,” Conde said.

Finding the right site for the restaurant can be a hurdle. The certification process awards points for those units in an existing space, like a shopping center. The stores should also be in a high-density area and near public transportation. The standards also call for designated parking spaces for carpooling vehicles.

While the commitment seems enormous, those involved with Pizza Fusion seem to thrive off the rigors of environmental compliance.

“It’s almost like an addiction,” Gordon said. “People are changing their cars from Hummers to hybrids. I think that’s just awesome.”

Another challenge of going completely green is the possibility of overlooking the restaurant’s main purpose: the pizza. But the company is also trying to set itself apart in this area, Lazar said. It is working to gain organic certification for its restaurants, which also sell sandwiches, salads, desserts, beers and wines. Vegan, gluten-free, vegetarian and lactose-free choices also are available.

“People continue to come back because of the pizza, but getting them in the first time can be the toughest thing,” Gordon said. “So we say they come in for the environment and stay for the pizza.”