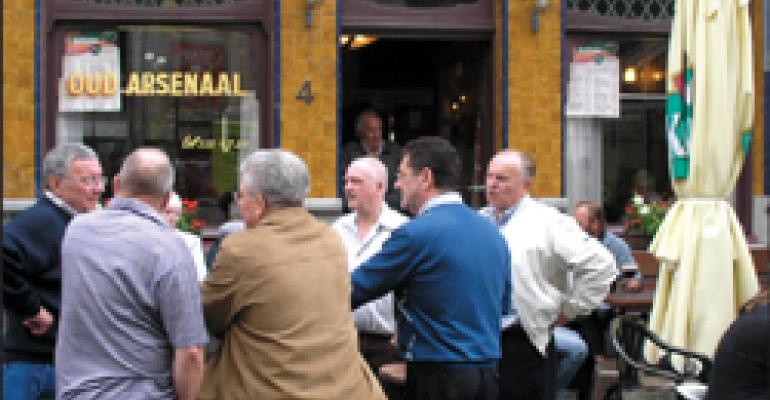 In the early days of brewing in America, the prevailing influences were British, which was hardly surprising given that many early settlers traced their lineage to Mother England. Later, in the early and mid-1800s, waves of German immigrants arrived, bringing with them the cool-fermented lagers that were sweeping Europe. By the dawn of the 20th century, English-style ales had given way to German lagers as the dominant element in the domestic beer market.

Today, however, it can be argued that the most significant national influence on the direction of the domestic beer market, in fact, hails from Belgium.

These days, Belgium’s influence is felt almost everywhere that beer and food co-exist, from the “beer cuisine” restaurants and gastropubs to fine-dining locales searching for food-friendly, prestige labels to add to their beer lists.

Yet, it is arguably less the more familiar, mainstream Belgian brews that have made an impact on the market over the past few years than it is a different group of ales, a decidedly quirky bunch known as Belgian specialty beers.

Still, people likely are more familiar with the qualities of Belgian specialty beers than they think.

Enjoyed a fruit beer lately? Thank the Belgians. A spiced beer? Again, influenced by Belgian brewers. Strong, forcefully malty ales or light, coriander-spiced wheat beers? Once more, the Belgians. And while we may see North America become an international leader in beer cuisine, that trend, too, can be traced to the cuisine à la bière of, you guessed it, Belgium.

Part of the reason for the rise in popularity of Belgian beer—both with brewers and consumers—is its general “user-friendliness.” In contrast to, for example, American pale ales and India Pale Ales, which can have forcefully bitter personalities, Belgian beers tend to be maltier and sweeter.

Another argument in favor of Belgian brews is their overall utility at the dinner table. Again, unlike more bitter beers, Belgian styles—like malty, faintly roasty and sometimes chocolaty dark abbey ales—can be paired with a wide variety of foods, from vegetarian stews to roast meats and even some desserts. This makes them particularly appealing to restaurateurs who wish to provide a premium beer alternative to wine by the glass.

In fact, perhaps the only drawback to Belgian and Belgian-style beers, from an operator’s point of view, is that they require significant server knowledge. For example, the key to ensuring the enjoyment of such brews is knowing when to decant the beer into the glass, leaving the yeast sediment from bottle refermentation behind, as with most of Belgium’s famed Trappist ales, and when to swirl the yeast into the beer, as with wheat beers and most strong golden ales. Also, as with any potent drink, servers must be trained to caution the customer about the beer’s sometimes hidden strength, and monitor their drinking accordingly.

Overcome these small hurdles, however, and these inspiring brews can reward restaurateurs with contented customers and impressive premium-beer profits.