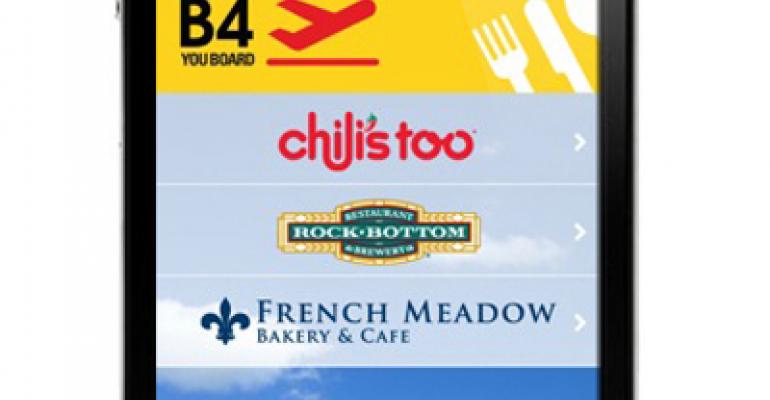 HMSHost Corp. said it is expanding a service that lets travelers at airport departure gates place food orders via a mobile software application on Apple and Android smartphones and other devices.

The Bethesda, Md.-based airport foodservice provider began offering gate-side delivery and take-out with its B4YOUBOARD mobile app in May for Apple devices at Delta’s Terminal 3 at JFK International Airport in New York.

“The expansion of HMSHost’s mobile app to Android phones is another step in our effort to combine terrific food and the latest technology to make travel easier and more enjoyable for our customers,” said Joe Waller, HMSHost vice president of business development.

The app lets passengers securely order, reserve and pay for meals, retail items and premium services at the airport via mobile device. The software is free and available for download at the Android Market and Apple’s App Store websites.

At the Minneapolis-St. Paul airport, customers can order from 7 a.m. to 8 p.m. from HMSHost-operated restaurants French Meadow Bakery & Café, Rock Bottom Restaurant & Brewery, and Chili’s Too!

HMSHost officials said it plans to add B4YOUBOARD service at Chicago’s O’Hare International Airport later this month, before deploying at additional East and West Coast airports in the first half of 2012.

“The mobile app orders go directly to the kitchen, where the meal is prepared by our kitchen associates, just as a sit-down meal would be,” she explained. “Once ready, the meal is picked up by one of our dedicated delivery associates, who walks to the traveler at his or her gate. Or it can be put at our restaurant location for customer pick-up.”

Consumers enter their payment card information into the mobile app, which passes it to a secure computer server for processing transactions, Duffy said.

To support the new program, HMSHost has added a few employees to focus solely on B4YOUBOARD orders, designed customized packaging, and placed delivery personnel in a branded chef’s hat and apron to make them more visible to customers, she said.

HMSHost representatives said the company is in the process of benchmarking guest satisfaction with B4YOUBOARD and its role as a sales driver. While the company doesn’t have hard figures yet, it said anecdotal evidence shows the app has “been very well received by our customers.”

“Overall, there’s keen interest in the app because it’s new technology and it’s a level of customer service that has never been seen in an airport before — actually having your meal delivered to you at the gate while you are waiting to board a plane,” Duffy said.

“As the first airport restaurateur to offer this service to travelers, we are looking at many exciting ways we can marry technology into marketing directly to our travelers and loyal customers,” Duffy added. “When you think about it, being able to communicate directly with someone to a device in the palm of his/her hand is the highest form of one-to-one marketing.”

Duffy said the number of weekly downloads of B4YOUBOARD nearly tripled when it was added in the Minneapolis-St. Paul airport. “We’re pleased that we’ve seen on average about 400 downloads per month since the app launched in May at JFK,” she said.

As for the menu items being requested using B4YOUBOARD, Duffy said the lunch daypart is getting the most business and, overall, “We’re seeing primarily sandwiches and burgers being ordered, as well as specialty salads like Chili’s Too Caribbean Salad.”

The mobile app does not use GPS technology to locate the phone owner for purposes of determining where the delivery should be made, but does rely on each mobile device’s location-fixing capabilities to pull up options for the appropriate airport, she said. Users may also manually choose a restaurant from which to order based on their location in the terminal.