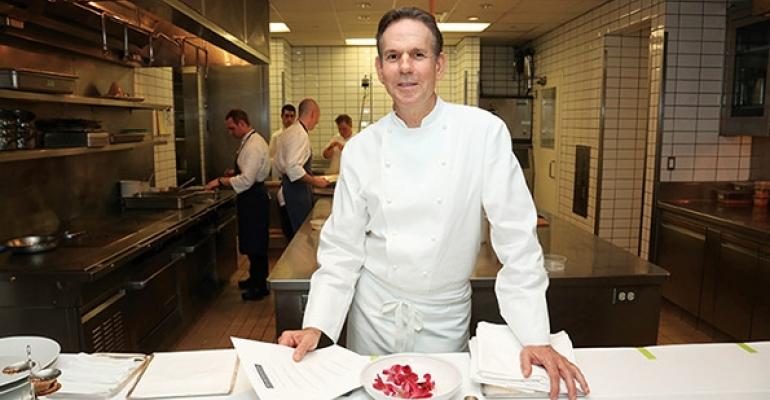 <p>Thomas Keller, chef and restaurateur of The French Laundry, Per Se and other notable restaurants</p>
NRN 50

The world at large might be enamored of chefs that appear on television, with their catchphrases, charisma and appreciation for drama, but ask chefs about who they admire, and as likely as not they’ll mention Thomas Keller.

His appearances at culinary schools draw lines of adoring students hoping for an autograph. His attendance at  industry parties is accompanied by hushed whispers of appreciation, and hope for his signature salmon tartare cones. The roster of leading chefs who cut their teeth at his fine-dining bastions, The French Laundry in Napa Valley and Per Se in New York City, boggles the mind and includes Grant Achatz of Alinea in Chicago, René Redzepi of Noma in Copenhagen, Corey Lee of Benu in San Francisco,  Jonathan Benno of Lincoln Ristorante in New York City and countless others.

Keller also works to foster excellence in younger chefs. Together with chefs Daniel Boulud and Jérôme Bocuse, he founded the Bocuse d’Or USA Foundation, which seeks out, trains and supports members of the American team that competes in the Bocuse d’Or, a biennial competition held in Lyon, France, that is considered the most prestigious culinary contest in the world.

Team USA had been foundering for years, never scoring above sixth place, until the most recent competition in 2015, when Keller protégé Phil Tessier and his commis Skyler Stover brought home the silver medal.

Keller got his start in South Florida, working at a Palm Beach restaurant managed by his mother. After years in American kitchens, Keller moved to France in 1983,  working at top restaurants including Guy Savoy and Taillevent before opening his first restaurant, Rakel, in New York City — a critical if not financial success.

He took over The French Laundry in Yountville, Calif., in 1994 to wide acclaim and then opened a French bistro, Bouchon, in 1998. Keller returned to New York with the 2004 opening of Per Se, which soon, just like The French Laundry, became one of the world’s most highly rated restaurants.

He has since opened more Bouchon and Bouchon Bakery locations, a casual restaurant in Yountville called Ad Hoc and Bar Bouchon in Beverly Hills, Calif.

Listing Keller’s awards would be tedious. Suffice it to say he’s won just about all the ones he’s qualified for, including all the possible James Beard Foundation Awards. He’s also a chevalier of the French Legion of Honor and is the first and only American-born chef to have a three-star Michelin rating at more than one restaurant — Per Se and The French Laundry.

But what chefs admire about him is his exactitude — his tireless desire to find the perfect way to prepare and present a dish.

“I think the greatest thing that we have here [at Per Se] is the evolution of the small, intricate parts that we do  every single day,” Eli Kaimeh, chef de cuisine of Per Se, told  Nation’s Restaurant News when the restaurant was inducted into NRN’s Fine Dining Hall of Fame.

That includes refining how to run a kitchen. Keller is credited for being a leading force in evolving American fine-dining kitchens from steam rooms of frenetic  activity to quiet places of focused precision.

To maintain  a common culture between his restaurants in New York and California, he set up closed-circuit televisions to keep both kitchens connected.

“We’re constantly supporting each other with recipes and ideas,” Kaimeh said. “It’s really nice to see our comrades  doing the same things that we’re doing. It’s almost like a  security blanket.”

As an icon of culinary excellence, Thomas Keller remains one of the most powerful people in the foodservice industry.