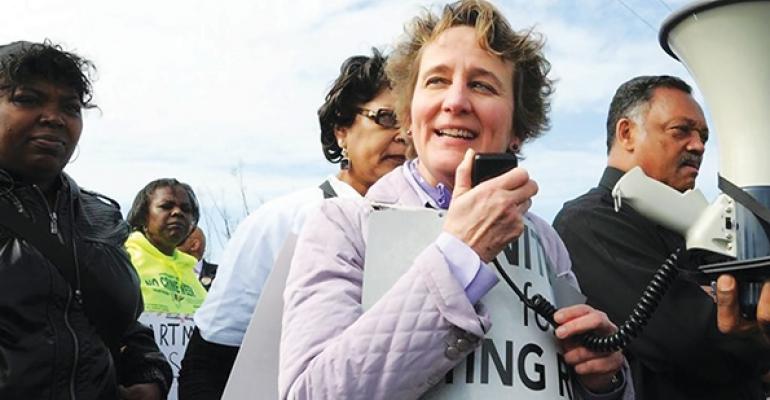 Breaking into The Power List Top 10 is a woman shaping the restaurant industry landscape not as the face of a brand, but instead of the industry’s front-line workers. Mary Kay Henry’s efforts with Fight for $15 — a campaign calling for a $15 federal minimum wage  — are putting restaurants on notice.

Henry is the president of the Service Employees International Union, which represents public service workers. The group’s most vocal advocacy to date has centered on minimum wage, and has  publicly targeted the restaurant industry, especially operators of quick-service brands.

Wage pressures are nothing new to the restaurant industry, but in the past three years supporters of higher pay for workers made headway in winning the hearts and minds of the public to the cause.

What began as a series of protests in November 2012 in New York City at Burger King, McDonald’s, Taco Bell, Wendy’s and other quick-service restaurants has expanded into a nationwide effort that in November 2015 saw protests in 270 cities under the Fight for $15 banner.

The SEIU started the Fight for $15 campaign and continues to fund it.

“People who work for the richest corporations in America should be able to afford at least the basic necessities to support their families,” Henry has said of the efforts to raise the minimum wage from its current $7.25 an hour, last increased in July 2009.

Industry groups such as the National Restaurant Association and the International Franchise Association have disputed claims by the Fight for $15 organizers.

Amid November’s worker protests, for example, Christin Fernandez, the NRA’s director of media relations and public affairs, labeled the protesters’ claims as “SEIU’s recycled attacks on an industry that provides career opportunity and pathways to success for over 14 million Americans.”

Fernandez said a $15 minimum wage would hamper the ability of small and franchisee-owned businesses to grow.

The IFA earlier called the $15 an hour minimum wage “unrealistic” and warned it would lead to higher prices, reduced patron traffic and sales and ultimately a loss of jobs.

Yet the public has had a positive response to the Fight for $15 message. An October survey by global consulting firm AlixPartners LLC found 51 percent of surveyed consumers endorsed restaurant-worker movements for higher pay.

While the U.S. Congress has stalled efforts to raise the national minimum wage, states and municipalities have  increased rates in their jurisdictions.

In a December editorial, The New York Times  stated: “Sooner or later, Congress has to set an adequate wage floor for the nation as a whole. If it does so in the near future, the new minimum should be $15.”

Henry joined SEIU’s staff in 1979, was elected to the union’s international executive board in 1996 and become an executive vice president in 2004, where she served as the union’s chief health care strategist and led efforts to build a stronger voice for healthcare workers.

In 2010, she was unanimously elected SEIU’s president and the first woman to lead the organization.

With the number of minimum wage efforts on the horizon and 2016 presidential election heating up, the restaurant industry is likely to hear more from the SEIU.