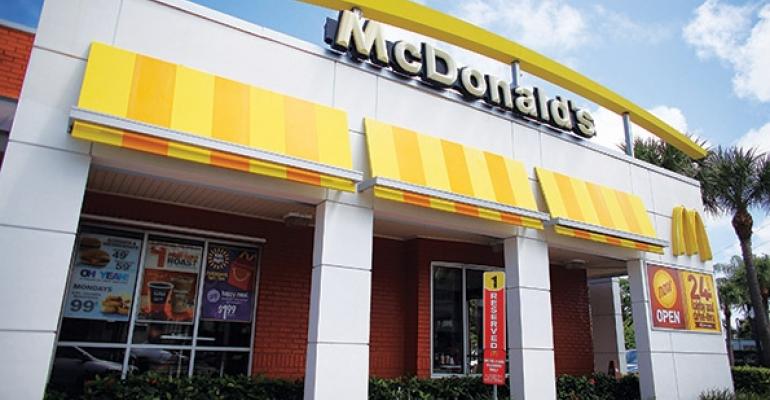 Steve Easterbrook wasn’t exactly given an easy task when he was named the CEO of McDonald’s Corp. last January.

The quick-service burger giant was in the midst of one of the worst sales slumps in company history — a slump that was evident in each of McDonald’s major markets, but particularly at home. In the U.S. market sales had been falling for three years, leading to perhaps its first-ever decline in domestic system sales in 2014.

The chain with the largest marketing budget in the restaurant industry was suddenly losing the battle in the world’s most competitive market. Burger King, made nimble and aggressive under owners 3G Capital, was  taking market share. Chipotle Mexican Grill, McDonald’s  one-time protégé, had built its business seemingly on being the anti-McDonald’s.

Easterbrook responded to the challenge in 2015 with a lengthy series of efforts, some big, some small, that challenged decades of legacy thinking within the McDonald’s corporate establishment.

None of those efforts crystallized that shift in thinking more so than the Oak Brook, Ill.-based company’s decision to start serving breakfast all day nationwide in October. McDonald’s long resisted the idea of serving breakfast items after 10:30 a.m., citing the already complex menu and the challenges of serving eggs alongside burgers.

Yet customers have long requested Egg  McMuffins in the afternoon, and with sales at breakfast holding firm even as lunch and  dinner sales lag, the company began exploring  the idea. All-day breakfast went from conception  to rollout in record time.

The company began testing all-day breakfast in June. By October, just four months later, the  program was national — a remarkably short time frame for a company known for its bureaucracy and its lengthy testing process.

“No business or brand has the divine right to succeed,”  Easterbrook, the former chief brand officer, said during an announcement on a corporate restructuring in May. “Our recent performance has been poor. The numbers don’t lie. We will not shy away from the urgent need to reshape the business.”

McDonald’s is a much leaner company now than when Easterbrook took over. The company has made significant general and administrative cuts in an effort to save $500 million. It is also selling restaurants to franchisees. A company that once thought it needed to own 25 percent of its locations to earn credibility with its franchisees will one day own just 5 percent.

The company is also trying numerous other efforts to lift sales. It is giving local markets more autonomy to sell products and offer deals to customers. It is spending heavily on technology in an effort to catch up to competitors that have long worked on app development and other customer- facing programs.

This January, it will kick off a new value platform known as the “McPick” menu that will enable customers to pick two or more items from a select menu for a single price. The first national rollout will be a 2-for-$2 promotion. But the promotion can be tailored to fit different items at different price points.
While the efforts appear numerous, they have to be.

“There is no silver bullet,” Easterbrook said in July. “No one move will turn a business that has been in  decline for three years.”

And it will be some time before it is known whether these efforts will work, though early signs for the chain are  encouraging. Domestic same-store sales rose 0.9 percent in the third quarter, the first increase in two years, and  indications are that all-day breakfast has generated sales in the fourth quarter.

But there is no arguing that  under Easterbrook, McDonald’s has made some big changes,  making him an easy pick for this year’s Power List.