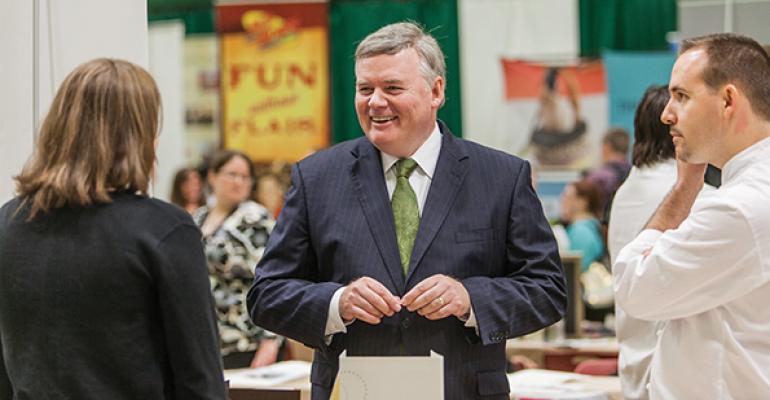 NRN presents The Power List 2016, our third annual list of the most powerful people in foodservice. The Influencers on the list are educating the next generation of chefs and restaurateurs and defending and advocating for the industry.

As president of the most recognized culinary school in America, Tim Ryan has not only been transforming how the next generation of chefs is educated, but also influencing nearly every aspect of the restaurant industry.

The first alumnus and faculty member to rise to president, Ryan is responsible for driving the sustained excellence, innovation and growth the CIA has become known for, and is credited with earning the school its reputation as the Harvard for Cooks. His thought leadership has positioned the CIA as a leader on important industry issues, such as health and wellness, world flavors, food ethics and sustainability.

Since 2001, he’s helped the CIA evolve with the times. The CIA added modernist cuisine into what had historically been an all French-curriculum, and launched the world’s first bachelor’s degree programs in culinary arts management and baking and pastry arts management. More recently, the school developed and opened a brewery and integrated a 3-D food printer into the curriculum. Ryan is also responsible for the institution’s global expansion, including establishing a campus in San Antonio, Texas, dedicated to Latin cuisine and opening the school’s first international campus in Singapore.

Among the many in the industry that espouse Ryan’s influence is Grant Achatz, the Chicago chef-owner of Alinea, Next and The Aviary and a 1994 CIA graduate who says he continues a relationship with Ryan even today.

“Tim Ryan is very in touch with the restaurant industry. He has the pulse and he speaks the language,” Achatz said in a recent interview with the Pittsburgh Post-Gazette. “People really underestimate the way he shapes American gastronomy.”