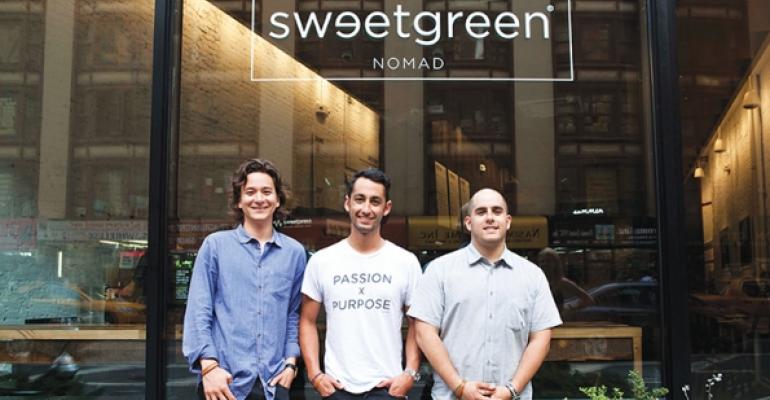 Since the fast-casual chain debuted in Washington, D.C.,  in 2007, its co-founders, Nathaniel Ru, Jonathan Neman and Nicolas Jammet, have demonstrated an uncanny ability to drum up the consumer masses and attract the checkbooks of industry heavyweights with healthful menu items and locally sourced ingredients.

Recognizing the brand’s potential, Ru, Jammet and Neman have received big bucks from the likes of Danny Meyer and Daniel Boulud, and most recently $35 million in funding from T. Rowe Price Associates Inc. and Revolution Growth, an investment fund started by former America Online CEO Steve Case, who became a member of Sweetgreen’s board in 2013.

Now Sweetgreen is looking to grow. This month the chain announced it will move its headquarters to Los Angeles to help fuel West Coast growth. It will continue to have offices in New York and Washington, D.C., to focus on continued East Coast expansion.

Recent investments will also support the brand’s commitment to technology — its mobile ordering app already processes about a quarter of the chain’s transactions — with the aim to hire a team of developers and bring all tech work in-house, TechCrunch reported.

It’s the merging of technology with clean eating that has resonated in a big way with Millennials.

But even as the chain continues to grow — the current count is 36 units — and the lines wind longer around the block during the lunch rush, the initial vision and focus of its founders remains the same.

“We’re selling a set of values that are about doing everything right [and] sustainably,” Jammet said in a recent interview with Bloomberg Business. “I mean that in business, in the food we serve, in the way we hire and treat people in our stores [and] in our community, on the farms we work with, in the way we build our stores.”

Going big while staying small is no easy feat, but Ru, Jammet and Neman appear to be pulling it off.