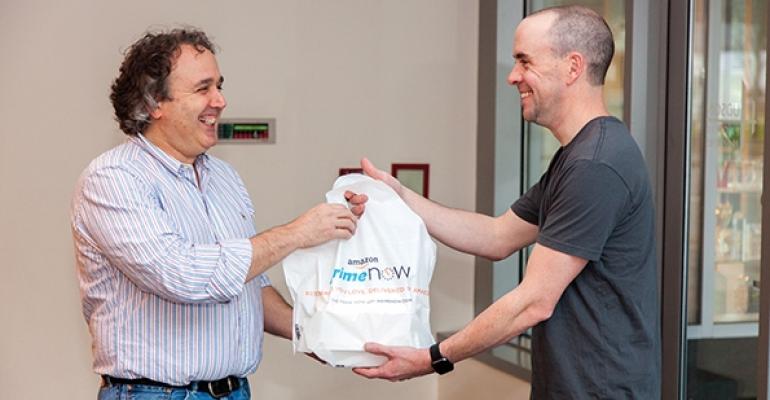 It sounds familiar: Amazon.com bursts onto the scene with a new platform sure to reshape an established industry’s landscape, probably forever.

Luckily for independent restaurants, the company’s latest endeavor — a digital-ordering and delivery service — should work out better for them than it did for independent bookstores.

Founded more than 20 years ago, the Web-commerce giant last September added restaurant delivery to its Prime Now app, an offshoot of the popular Amazon Prime service, in its home market of Seattle. It has since rolled out the feature to Portland, Ore., as well as Los Angeles and Baltimore, with even bigger ambitions for a nationwide program, said Gus Lopez, general manager for Amazon Restaurants.

“I’d characterize this as beyond the concept being experimental to something we’re actively growing,” Lopez told tech news site Re/code in November.

Even before Amazon brought its sheer scale, war chest of growth capital and expertise in technology and shipping to the third-party delivery game, both independent operators and chains had been experimenting aggressively with weaving a home delivery option into their mobile apps and online-ordering platforms. While other delivery players Postmates and DoorDash are gobbling up restaurant chain partners, Amazon seems ready to stake out the high-end independent segment, which should allow small restaurants to reap the benefits of how consumers shop in 2016 and beyond. Longtime player Grubhub will be the Amazon’s main competitor in that segment.

Independent restaurants likely serve many of those consumers who have signed up with  Amazon Prime for everything from groceries to streaming entertainment. According to a Cowen & Co. survey, Amazon Prime has 41 million members, and the $99-per-year service could reach half of all U.S. households by 2020.