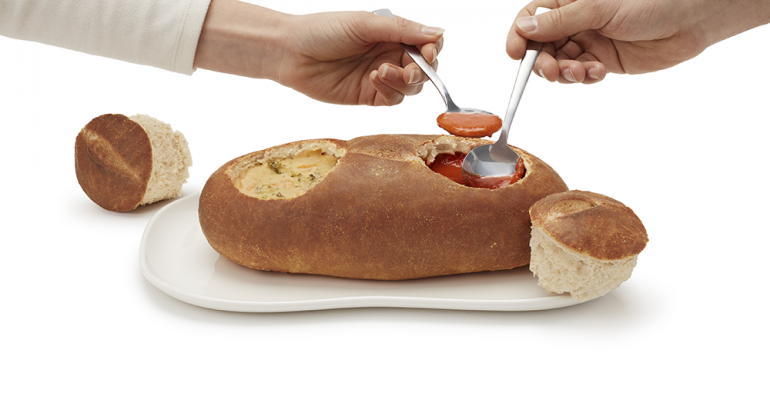 A recent story by Kristen Hartke in the food section of the Washington Post asked plaintively “what if you like to eat from a plate?” as it went on to lament the ubiquity of “Bowl food.” She noted with italicized horror that, when England’s Prince Harry married the American Meghan Markle, they actually served bowl food to Queen Elizabeth at their palace reception. Admittedly the food in those bowls was of a higher culinary order, like fricassée of chicken with morels and young leeks or pea and mint risotto with pea shoots, truffle oil and Parmesan crisps.

Despite these gourmet affectations, the implication is clear. Bowl food is yet another example of American informality and incivility, another opportunity to thumb our collective nose at centuries-old politesse represented by the venerable dinnerplate, imprinted coat of arms optional. In the ultimate withering putdown, Hartke quotes a British etiquette expert who sniffs that “only dogs eat from bowls.”

Bread bowls. Even the most cosseted canines likely don’t eat from bread bowls, the edible, hollowed out soup vessels. Hartke’s article doesn’t acknowledge them or their unshakeable popularity with patrons. Though bread bowls predate bakery cafes, they came into their own with the rise of that segment. They allow chains both to reinforce and add a fresh spin to their bakery expertise, and they also differentiate their contents from garden-variety diner fare in a way that consumers truly can’t duplicate at home.

Panera made some very soupy waves and generated lots of attention last month with the promotional Double Bread Bowls, which debuted on Valentine’s Day and ran until February 28. The elongated loaf with cavities at each end could be shared with a sweetheart or enjoyed alone by singletons looking to double dip into their favorite combination of soup, chili and/or mac & cheese. The company touted a possible 91 different pairings, which gave patrons plenty to chew on for the run of the limited-time offer. 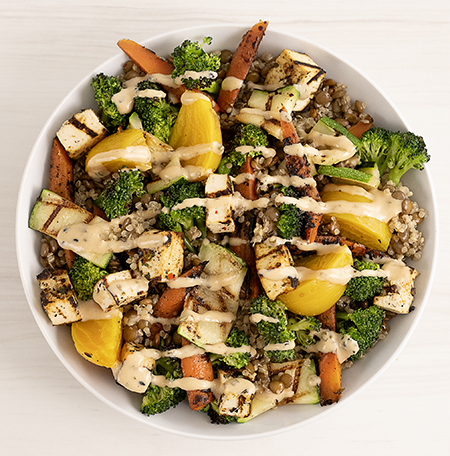 Better-for-you bowls. Health-oriented operations have embraced the bowl, too, as an opportunity to pile on grains and vegetables for their diet-conscious customers. Vegan chain Veggie Grill offers a half-dozen varieties, like the best-selling Sonoran Bowl, which is built on a base of organic quinoa and seasoned black beans, then topped with red pepper sauce; and the seasonal Whole Earth Bowl (pictured) that starts with a special lentil and quinoa mélange and is finished with ginger-miso dressing. Both include lots of vegetables.

Tropical Smoothie Cafe features entrées like the Hummus Veggie Bowl and Thai Chicken Bowl that can be washed down with the brand’s signature smoothies such as Mango Turmeric and Strawberry Granola, both of which are made with unsweetened almond milk.

Global bowls. Hartke amusingly blames ramen for the demise of plates; she contends that once we discovered that ramen wasn’t just something to be nuked in a chipped coffee mug at 3 a.m., we never looked back. Noodle-crazed, we turned everything into a bowl of ramen. In fairness, this is not just another example of creeping Ugly Americanism; lots of rice- or noodle-based items are actually consumed in bowls in their native habitats. Of course, we frequently add our own multicultural touches, as with Pei Wei Asian Kitchen’s Spicy General Tso’s Rice Bowl with Sriracha and sesame sauces, or its contemporary cousin, the new Cauli Flowerpower Bowl with super-trendy riced cauliflower made daily in house.

Digging deeper. While the WaPo story is written tongue-in-cheek, it does summarize many of the key attractions of bowl food from the patron perspective. It has an abundant, bottomless, “Rubenesque” perception; it suggests comfort, as in the mac & cheese or chicken soup that fill it, and it may even telegraph a “huggable and healthy” image. Hartke loses points, however, for overlooking convenience: Bowls are relatively easy to tote and, if necessary, to eat from in the car.

The bigger missing element, however, is the benefit to the restaurateur. By smartly selecting ingredients, the operator can control food cost, particularly with regard to pricey animal protein. Yet a brimming, rotund bowl doesn’t signal deprivation to the consumer; its visual value connotation makes it a gastronomic win-win and goes a long way toward explaining its ubiquity.

Nancy Kruse, president of the Kruse Company, is a menu trends analyst based in Atlanta. As one of LinkedIn’s Top 100 Influencers in the U..S, she blogs regularly on food-related subjects at LinkedIn.com.