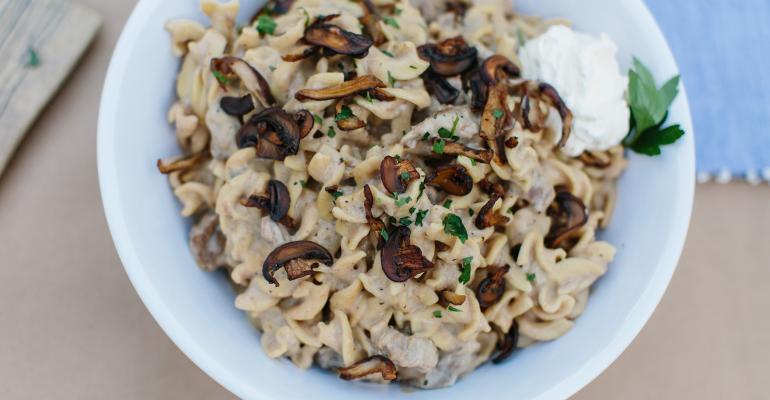 A place at the table

These modern comfort food dishes are rich in craveability and savory satisfaction.

As operators continue to introduce new and trendy dishes to their menus to cater to the demands of hard-to-please consumers, many are finding that their customers cannot get enough of tried-and-true comfort foods.

But while comfort foods remain high on the list of popular menu items, restaurateurs also have learned that such dishes must deliver taste, modern twists and craveability together with nostalgia.

As a result, food suppliers and manufacturers are striving to create comfort food favorites that meet or even exceed contemporary requirements. For example, the Blount Fine Foods family has successfully tried, tested and approved four new entrées devised for operators and consumers alike.

These family-style favorites are prepared from tasty, nostalgic recipes just like Mom — or even Grandma — used to make:

Chef Jeff Wirtz, senior director of culinary development at Blount, says the team began the new product selection process by posing questions internally and externally to determine what qualifies as comfort food — the dishes that their families and friends enjoy.

“We had 14 to16 ideas and whittled them down to the four frontrunners,” he says. “I guess you’d call these dishes 'Upscale Americana' — classic recipes with a modern update.”

The modern update reflects the quality of the ingredients. Each dish is “clean label,” meaning no fillers, no artificial colors, no synthetic chemicals, real dairy, and ABF (antibiotic-free) protein. In other words, the ingredients are all terms diners can recognize, understand and pronounce.

The Blount family has developed its palate for delicious, nutritious foods over five generations. The company was founded in the 1880s, after the Civil War. It is now run by President Todd Blount, who tastes and approves every product that leaves the test kitchen.

What makes such comfort foods restaurant favorites? Aside from being delicious, these recipes harken back to a simpler time when Mother or Grandma prepared them from scratch.

Along with great flavor and modern ingredient twists, they also bring pleasurable associations of family meals, dining with friends and happy times. They are meals that satisfy the craving for “deliciousness.” Eating them makes diners feel good.

The four Blount comfort foods can be menued as specials or as regular menu items, the company says. Wirtz suggests they are not only for the winter months, but also are popular year-round.

Comfort foods have a history

There are tales to tell about the origins of these Blount entrées, offering operators a great way to add a little romance or storytelling to their menu descriptions.

Beef Stroganoff first appeared in mid-19th-century Russia, when a French chef created the dish and named it for a member of the wealthy Stroganoff family. Stroganoff also became popular in China. A century later, Russian and Chinese immigrants, as well as U.S. servicemen stationed in China before World War II, brought the dish to America. It was a favorite in the 1950s.

Blount has created a recipe that remains true to the original Stroganoff, and includes tender stewed beef and egg noodles served in a rich sour cream sauce.

Comfort food comes from other cultures

Karen Malody, owner and principal of Culinary Options, says it’s great that these extensions of other cultures now qualify as Americana. “I love the fact that comfort foods have emerged from immigrant cultures and have embedded their flavors and styles into American hearts and stomachs,” Malody says.

“If the term ‘melting pot’ means anything, it manifests in this food category,” she adds. “So many cultures have enriched our culinary foundation. All these foods have roots in our ancestral heritage.”

Malody also appreciates the convenience of having comfort food available in restaurants. “We crave these foods,” she says, “but sadly we don’t have the time to prepare them.”

The Blount Family Kitchen solves that quandary with dishes that not only satisfy the craving for comfort foods, but also are wholesome and prepared from the finest ingredients.

“We literally crave comfort foods,” she says. “They don’t disappoint. They aren’t complex. They are honest and straightforward. We don’t have to contemplate or analyze them or describe them in elegant terms. They are just plain good.”