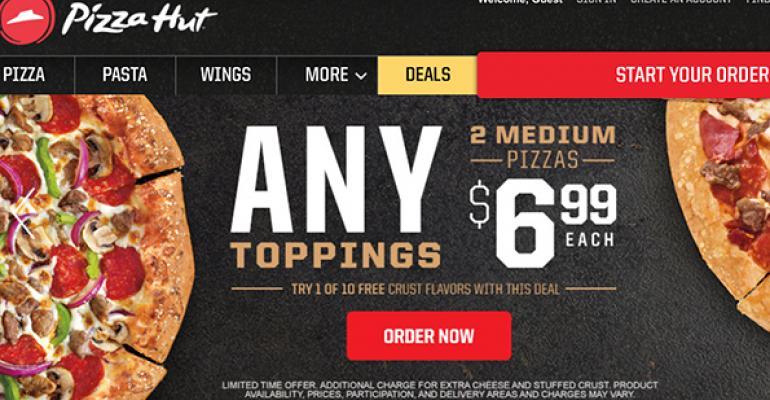 Pizza Hut is working to readjust its recent brand overhaul, which has fallen short of expectations, company officials said this week.

“We obviously have not been happy with the performance of the relaunch of Pizza Hut,” Greg Creed, CEO of parent Yum! Brands Inc., said Wednesday at the Bernstein Strategic Decisions Conference in New York. He said the company was focusing on the value messaging of the new platform.

The Plano, Texas-based chain unveiled in November its “Flavors of Now” platform, which executives said at the time was the biggest change in the brand’s 56-year history. It included premium ingredients, reduced-calorie offerings, more pizza toppings and crust flavors, and customizable features like drizzles.

But since March, franchisees and executives have expressed disappointment in the lackluster performance of the relaunch.

“Unfortunately, the new ‘Flavors of Now’ positioning did not deliver the sales momentum that we had anticipated,” said Jim Schwartz, president and CEO of Overland Park, Kan.-based NPC, which operates 1,277 Pizza Hut restaurants and 143 Wendy’s units.

In an earnings call with analysts in April, Creed said Pizza Hut sales were soft, and the brand was being outperformed by competitors.

“Unfortunately, we haven’t been as effective as we’ve liked with our marketing, and need to balance its appeal to Millennials with mainstream pizza customers,” he said. “We intend to do this going forward while working with our franchisees to bring more competitive value to the market.”

At Wednesday’s conference, Creed explained that the company needed to fix four things.

“The first one is our positioning,” he said. “The second one is value. The third one is the customer experience. And the fourth one is our assets.”

To address value, Pizza Hut has introduced a $12 Big Box promotion. Last weekend, it launched a $6.99 Any Pairs offer on orders for two medium pizzas.

“That’s an aggressive position to take in any marketplace,” Creed said, adding, “We’re working really hard on all those things.”

“The one thing I’m very comfortable on is that we win on food,” he said. “Our role is to get these other things fixed.”

Creed said franchisees were on board to work on the Pizza Hut positioning. The company gathered its franchisees for a “value summit” in March 2014, he said.

Yum! Brands chief financial officer Pat Grismer said in an earnings call after the summit that franchisees and the corporate team were on the same page about value.

“We’ve shared all the information and all of our knowledge around that value positioning and what we have to do, and I think what you’ll see is us come out aligned as one system in order to make a stronger value statement in the marketplace,” Grismer said.

In addition to challenges with its value positioning, Pizza Hut also faces technological issues that make the brand less competitive in the pizza segment, Creed said.

In the third quarter, the company will test a new delivery program in the Dallas area, but that has been limited by technology, especially in the point-of-sale systems, Creed said.

“We have nine POS systems,” Creed said. “It’s a little hard to be writing apps and getting things to link to nine POS systems. So what we are really doing is moving to one POS system so we can use that as a catalyst to transform the whole digital experience.”

Pizza Hut has more than 13,000 restaurants in nearly 90 countries.