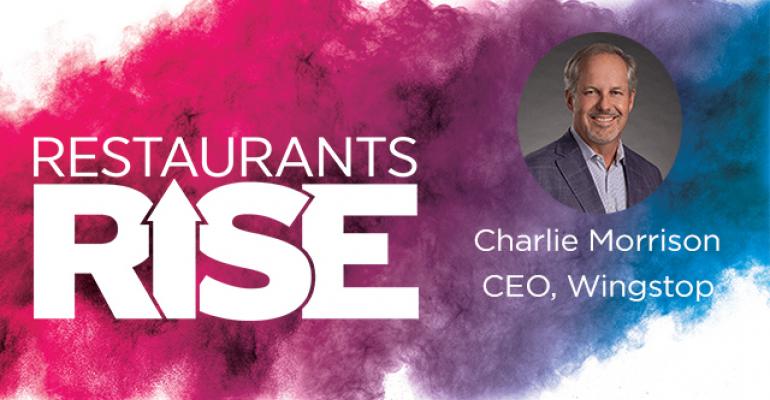 Nation's Restaurant News' newest digital platform and virtual event, Restaurants Rise, is almost here. Here's a sneak peak at what Wingstop CEO Charlie Morrison will talk about with us in June.
News>People

Wingstop keeps dining rooms closed for dine-in for now, pledging to be ‘first in, last out’

Though restrictions have been lifted in many states where the mostly franchised fast-casual chain Wingstop operates, chair and CEO Charlie Morrison said Friday none of the chain’s units in the U.S. have reopened for dine-in service.

“In the interest of our team members, of our franchisees and also our customers, we feel that opening too early is not a necessity for our business and we’d rather rely on the safe approach. So we’ve adopted an internal phrase we call FILO — First In, Last Out — we’ll be one of the last ones that will open our dining rooms across America,” said Morrison.

So far, franchisees have been very supportive of the idea, he added, saying they are watching the re-emergence of business closely to see whether it creates further risk.

The cautious approach is also made possible by Wingstop’s success with digital and off-premise sales during the crisis.

As restaurants across the country closed down for dine-in service in April to stem the spread of coronavirus, most public chains reported shockingly negative same-store sales numbers.

But Wingstop, the Dallas-based fast-casual chain with about 1,413 units systemwide, actually saw domestic same-store sales climb significantly, reporting an increase of 33% for the four weeks in April.

That increase followed a first-quarter domestic same-store sales increase of 9.9% for Wingstop, which is known for its focused menu of chicken wings in various flavors — boneless or classic — fries and tenders.

Morrison credits the company’s investments in its off-premise capabilities prior to the pandemic, which “positioned us beautifully” for this crisis.

“We were a brand that was built to be a digital and off-premise business. In fact, off-premise made up over 80% of our sales pre-COVID-19,” said Morrison.

But Morrison said another key factor was Wingstop’s culture.

“We really focus on our core values, which include being service minded, maintaining our authenticity and being entrepreneurial. Great entrepreneurs, as we know, are able to pivot and make adjustments very quickly to their businesses and position themselves in times like this and I think Wingstop was no exception to that and we relied on those core values. Our team was able to react very quickly and I think the results … speak for themselves.”

Morrison is scheduled to be a keynote presenter for the session “Winning the New Normal: Using Your Core Values to Navigate the Ever-Changing Landscape,” on day one of the upcoming Restaurants Rise digital event, hosted by Nation’s Restaurant News, on June 2-5.

Here’s a preview from the Wingstop CEO.