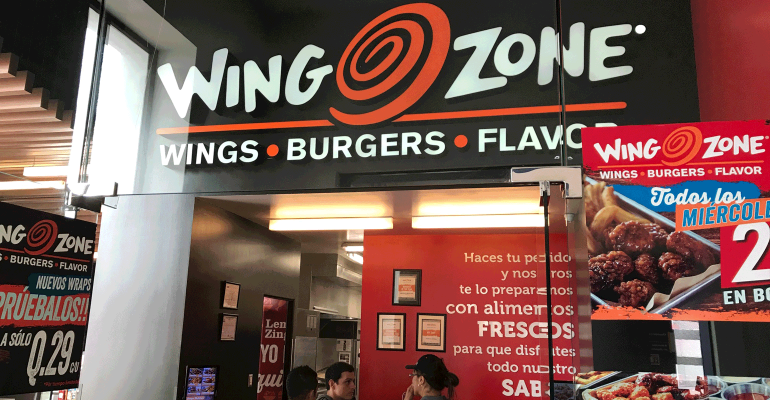 WZ Franchise Corp., parent to the 108-unit Wing Zone, in the past year has pared down the size of its restaurants and the number of menu items to simplify the predominantly franchised brand, the CEO says.

Matt Friedman, CEO and co-founder of the Atlanta-based fast-casual company, said the changes were made to reduce costs and ease operations. “We’ve introduced a new layout, look and feel for our restaurants,” Friedman said Tuesday in an interview with Nation’s Restaurant News. “We like to call it a pivot. It’s not a rebrand.”

The changes in menu and restaurant décor accelerated after the company conducted customer research for the brand. WZ Franchise Corp. has 85 restaurants in 14 states and 23 international units in four countries.

Friedman and co-founder Adam Scott started selling wings 1991 at the University of Florida, creating their flavor chicken wings in a fraternity house kitchen. After two years, they opened their first restaurant.

Friedman talked with NRN about the changes and how the concept has evolved: How did this pivot come about?

It started about a year ago. We had got caught up in the menu expansion trend, adding new flavor and new items. We really went back and looked at what was driving our business, which we found focused on three core products: our original wings, our boneless wing and our hand-breaded tenders.

How did that impact the menu?

We removed some low-performing items. We removed five items. Now we only cook 10 items. We’ve also taken our flavors down from 17 to 14. It’s all about the efficiency of the business. We also were able to reduce costs with one less fryer and our walk-ins are smaller.

What items were removed?

Appetizers and some desserts. We had multiple versions of salad, and now we do just one version. What check average do you run?

What kind or research did you do to prepare for these changes?

We went in around December of last year and did a pretty elaborate customer survey. We asked about menu, product and store design and what’s most important to them. Some customers were loyal; some had left us. They understand we don’t get orders our in 90 seconds. Most customers will wait 15 minutes for their orders.

How did you make it faster for loyal customers?

We created a call-ahead or VIP line. They can go right to the front of the line. It can be a cashless transaction if they’d used a credit card. They can be in and out of the store within 60 seconds.

How about the square footage?

We’ve downsized our stores. We’ve gone into 1,200 square feet with 24 seats. We understand our take-out/delivery business model. We were over-building our restaurants. We were putting 50 seats in, and rarely were those filled. About 90 percent of our business is taken off-premises. The smaller store has allowed us to get into more high-profile real estate. What were sizes of restaurants before this pivot?

How do the smaller units affect costs?

What other design modifications have you made?

We’ve added some really comfortable chairs for people to wait. We’ve added USB ports so customers can charge their phones. And we’ve added WiFi. This has allowed us to focus on what we’re really great at: That’s take-out and delivery.

There are four that have opened in the past six months. Those are what we call our efficient footprint. We’ve done delivery since the day we opened. We are experts in delivery. Our entire model is built on it, from packaging to how we get it to the door.

Is it all in-house?

Yes. We hire our drivers. We do not outsource them. One of the biggest challenges has been the recruiting and hiring of drivers.

Any tips on that?

It’s hard to compete against the Ubers, especially when they don’t have to wear a uniform and can work when they want. For us, it’s about culture. We’re in a lot of college and military markets, which are very high volume in delivery. Our retention of drivers is very strong, and they are paid very well. We have had to market harder in recruiting those drivers.