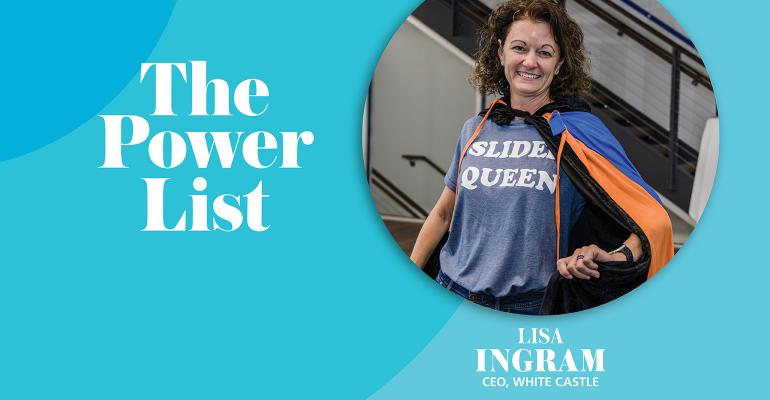 After 100 years and four generations of family ownership, White Castle continues to remain an iconic symbol in the restaurant industry.

And Lisa Ingram, White Castle’s CEO, president and chairwoman of the board, is leading the 360-unit Columbus, Ohio-based quick-service brand known for its sliders into its second century with an emphasis on its culture.

Ingram’s great grandfather, E.W. “Billy” Ingram, launched the brand in 1921 with $700 and 5-cent sliders, innovating such platforms as carry-out — with the tagline “Buy ‘Em by the Sack” — newspaper coupons and patented five-hole beef patties for faster cooking.

Ingram, in her LinkedIn profile, said, “Our 10,000 team members are second to none and continue to deliver memorable moments to our internal and external customers on a daily basis. We strive to keep White Castle relevant and quirky and fun.”

More recently, White Castle partnered with the National Restaurant Association Education Foundation with a new relief fund, “Change Is on the Menu,” and donated money through a narration of “Twas the Night Before Cravemas” by Oscar winner Richard Dreyfuss.

Civic engagement was also highlighted in 2020 when White Castle closed all of its 24-hour restaurants between 7 a.m. and 11 a.m. on Election Day in November to give team members time to vote in the presidential contest. Workers scheduled during that time — in the restaurants, at the home office and at the company’s manufacturing plants — were paid for the four-hour break.

“Starting this year and going forward,” Ingram said, “White Castle will give team members time to exercise their right to vote in presidential elections. We believe voting is a right of responsible citizenship, and we want all our team members to have that opportunity.”

The only other time White Castle units close is on Christmas.

Ingram has seen all aspects of foodservice. During college in Dallas, she waited tables at Snuffer’s Bar and Grill before entering the field of marketing.

Building communities remains a focus for Ingram and the White Castle brand.

“We seek to make a difference in our communities by feeding hunger, hopes and dreams,” Ingram said. Each year, White Castle and the Ingram-White Castle Foundation, founded in 1949, donate more than $2 million to a variety of charities across the nation, including more than $8 million for Autism Speaks in the last 10 years.

The foundation has also provided $1.5 million scholarships to full-time team members and their dependents.

And since 2012’s Hurricane Sandy, which devastated areas of the East Coast, White Castle has offered the Castle Shares Team Member Relief Program. Any team member who encounters an unexpected hardship can apply for a confidential relief grant of up to $1,500.

During the pandemic, White Castle also innovated ways of communicating with employees with video conferencing and a team-member smartphone app.