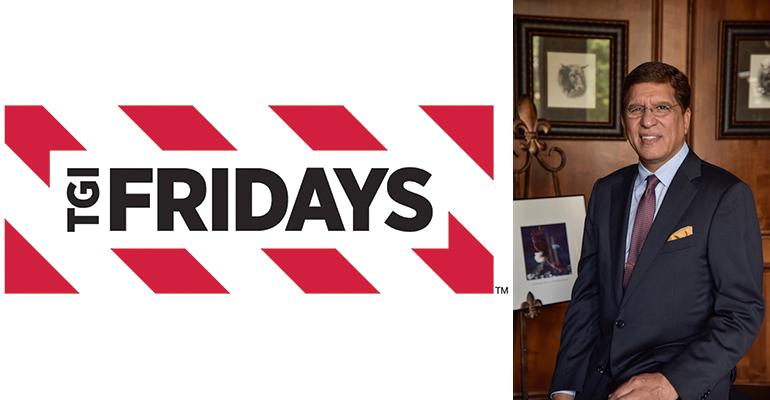 Khan, who founded and most recently served as chairman of multi-brand franchise company Falcon Holdings LLC, in Westlake, Texas, succeeds John Antioco in the role at the Dallas-based casual-dining brand.

“I believe this is an iconic brand,” Khan said in an interview at TGI Fridays headquarters. “It has a lot of legs in its history and heritage.”

Khan remains an owner of Falcon, which has 350 restaurants and manages another 150 units. Khan said a seasoned executive team has taken over at Falcon. He brought Giovanna Koning, chief financial officer at Falcon, to assume the same role at TGI Fridays.

“Our strategy will be people first,” Khan said when asked about challenges in the casual-dining segment. “That’s No. 1.”

Khan said his background as a franchisee will help as he takes on the role as a franchisor executive. About 80 percent of TGI Fridays’ 470 domestic restaurants are now franchised, the result of a refranchising program started after the chain was sold in 2014.

“I manage by consent,” Kahn said. “I talk to the franchisees and sell the ideas to them. My job is to help them understand where we are coming from.”

TGI Fridays has 900 restaurants, with about 430 locations abroad.

He said he will work with Stephanie Perdue, who joined TGI Fridays as chief marketing officer from Taco Bell in February, to hone the menu and marketing message.

“I think Fridays has great food. It could be better,” Khan said. “Stephanie has already come in with some new food products. We can upgrade the food quality. My focus will be on quality of food and quality of service. Service is everywhere a problem, whether you are fast food or casual dining.”

With Khan’s arrival, Antioco returns to his position on TGI Fridays’ board of directors.

Antioco had served as interim CEO before and after Robert Palleschi, who left late last year.

Khan said the move to a franchisor role means he will be required to listen more.

“I’ve been on the other side as the franchisee,” he said. “I know their pain.”

He said he is setting up franchisee committees to work on all aspects of the business, from marketing to purchasing.

Khan has received a number of awards as a franchisee, including the International Franchise Association’s Ronald E. Harrison award for his commitment to diversity in his operations in 2011, and IFA Entrepreneur of the Year in 2014.

John McCormack, co-founder and senior partner for Sentinel Capital partners, added in a statement that he had worked with Khan for more than 20 years and was confident because he had “successfully managed and grown branded franchise systems and has a deep understanding of how to work with private-equity ownership.”