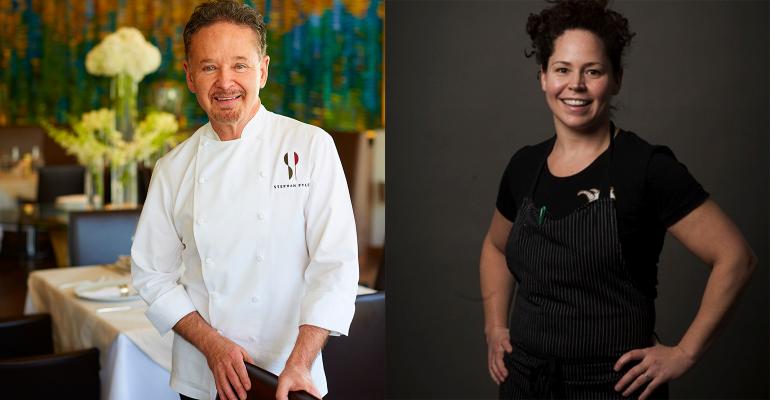 Pyles will be inducted into the MenuMasters Hall of Fame and Izard has been named the 2017 Innovator of the Year.

Pyles has long been a fixture on the Dallas dining scene and pioneered the Southwestern Cuisine movement in the 1980s.

A fifth-generation Texan, he has created 22 restaurants in five cities over the past 30 years, including his newest venture, Flora Street Café in the Dallas Arts District, which opened last spring and was named the best new restaurant by Texas Monthly and “restaurant of the year” by the Dallas Morning News, D Magazine and Dallas Voice.

The author of four cookbooks and host for two seasons of the Emmy-award winning PBS series New Tastes from Texas, Pyles was the first person in the Southwest to win a James Beard Foundation Award for best chef and the first Texan to be inducted into the Who’s Who of Food and Wine in America.

Izard, chef and owner of Girl & The Goat, Little Goat and Duck Duck Goat in Chicago, gained national acclaim for winning Bravo TV’s Top Chef in 2008. She was named one of Food & Wine magazine’s 10 “Best New Chefs” in 2011 and won the James Beard Foundation Award for best chef in the Great Lakes region in 2013.

She also has a line of sauces and spices for home cooks called Goat Goods and is the author of Girl in the Kitchen, which was published in 2011.

The chefs will be presented with their awards at MenuMasters’ invite-only 20th anniversary celebration at the Drake Hotel in Chicago on May 20.