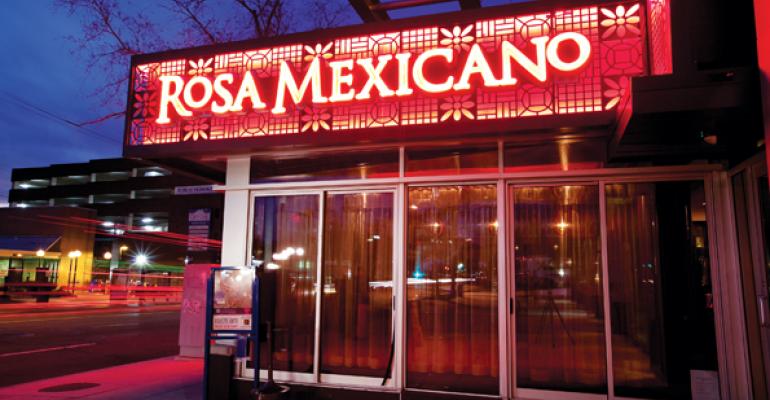 Rosa Mexicano, the polished-casual Mexican restaurant chain based in New York, has named foodservice industry veteran Tom Dillon to the posts of president and chief executive.

In his new capacity at the 29-year old company, Dillon will be responsible for strategic development and domestic and international expansion. He succeeds former president and chief executive Howard Greenstone, who will remain on Rosa Mexicano’s board of directors.

“This brand has a rich history and tremendous potential ahead — a powerful combination that I fully intend to maximize in order to propel its continued success,” Dillon said.

Most recently, Dillon was president and chief operating officer of Patina Restaurant Group, a New York-based firm with more than 60 restaurants and foodservice operations in performing arts centers on both coasts. Prior to that he served as president and chief operating officer at Richard Sandoval Restaurants, where he oversaw development of the company’s growth strategy and implemented an operating infrastructure that helped expand the company from five to 30 locations.

Earlier, Dillon was president and chief executive of Pret a Manger USA. While there, he doubled the size of the company and continues to serve on the board.

“Tom has the ideal blend of leadership, experience and vision to guide Rosa Mexicano into an exciting new chapter of growth,” said Joe Ferreira, chairman of Rosa Mexicano’s board and a partner at Goode Partners, a New York private-equity firm that owns the brand together with Rosa Mexicano Restaurants.

Earlier this year Rosa Mexicano was selected as one of Nation’s Restaurant News’ Breakout Brands. Founded in New York by Josefina Howard in 1984, Rosa Mexicano now has 15 restaurants in the United States, as well as three international branches in Panama, Puerto Rico and Dubai.

The chain generates systemwide sales between $75 million and $100 million, and its average unit volumes run about $7 million. The average per person check runs $20 to $25 at lunch and $40 to $50 at dinner.