James Beard Foundation Award-nominated chef Amanda Cohen is single-handedly responsible for getting more diners to eat their vegetables — and like it. 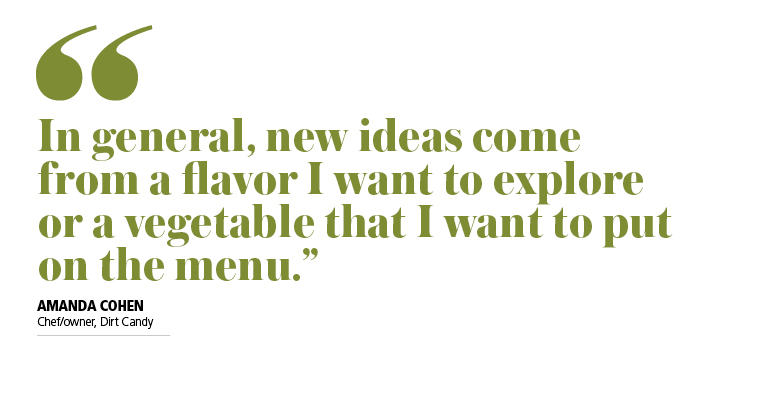 At Dirt Candy, her award-winning vegetable-only restaurant on New York City’s Lower East Side, Cohen creates elaborate dishes that intensify the flavors of everyday vegetables. She painstakingly works her magic on the humble candy of the earth, sometimes taking up to three months to create a single dish.

After laboring at some of New York’s better vegetarian restaurants; opening Teany, rock star Moby’s teahouse on the Lower East Side; and stints at Pure Food and Wine, and Heirloom, Cohen opened what was at the time a tiny 18-seat restaurant in the East Village in 2008. Dirt Candy soon earned numerous awards — as well as recognition from the Michelin Guide — and in 2015 moved to its current, larger space.

Forward-thinking in the kitchen and out, Cohen made Dirt Candy among the first restaurants in New York City to eliminate tipping and share profits with its employees. Other firsts Cohen claims include being the first vegetarian chef to compete on Iron Chef America, and authoring “Dirt Candy: A Cookbook,” the first graphic novel cookbook published in North America.

Up next for this trailblazing chef? According to a recent report on Eater New York, Cohen has applied for a liquor license in Tribeca for a fast-casual restaurant.