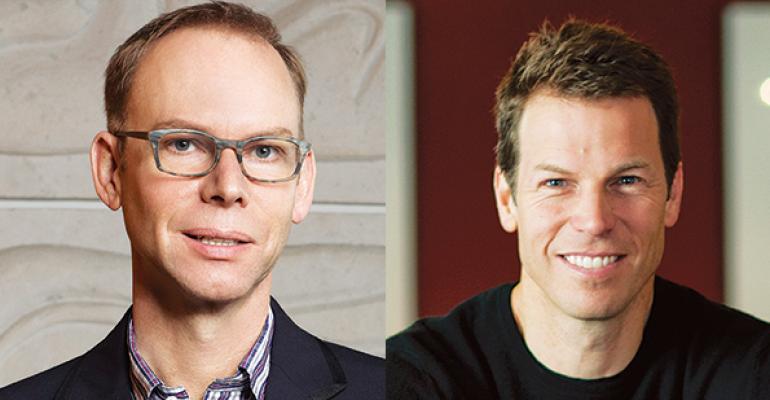 Pay for restaurant CEOs on the rise

Restaurants had a good year in 2015, at least based on the perspectives of the board members who decide how to pay their CEOs.

The median pay package for a CEO of a publicly traded restaurant company increased by 21 percent in 2015, according to Nation’s Restaurant News research and analysis of available CEO compensation information for 44 executives. Only 16 of those executives had compensation decreases in 2015. 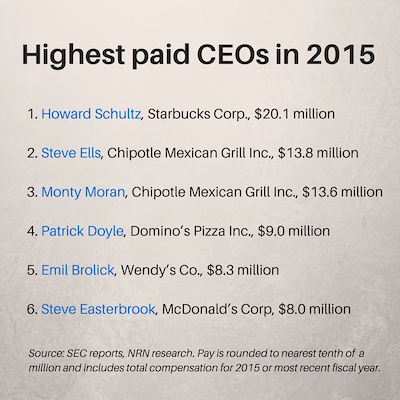 Median — or the midpoint — compensation totaled nearly $3.9 million, which was typically made up mostly of stocks, options and incentives based on company performance. That was up from $3.23 million in 2014.

Two-thirds of the CEOs of public restaurant companies saw pay increases. Public company CEOs tend to receive the bulk of their pay in the form of stocks, options, and some cash incentives. The $786,317 median salary last year, for instance, represented about a fifth of the $3.9 million median pay package.

That’s consistent with all industries: According to the Wall Street Journal, median pay for CEOs of the 300 largest publicly traded companies fell 3.8 percent last year.

The most notable decline in the restaurant industry was at Chipotle Mexican Grill Inc., where co-CEOs Steve Ells and Monty Moran both saw their pay cut by more than half, from nearly $29 million apiece in 2014 to about $13 million apiece last year.

Despite that decline, the two CEOs were still the second and third highest paid CEOs among all public restaurant companies.

Taken together, the two made about $27 million. That was far higher than the highest paid public company CEO in the industry — Starbucks Corp. CEO Howard Schultz, who made $20.1 million in total pay.

But even that was down slightly from the $21.5 million Schultz received in 2014.

Travis’ pay, meanwhile, declined entirely because he received a one-time stock bonus in 2014 of $5.7 million that he did not receive in 2015.

The NRN analysis did not include CEOs who were hired in the middle of the year, with the exception of McDonald’s Corp. CEO Steve Easterbrook, who took the job two months into 2015 and received a higher pay package than his predecessor, Don Thompson — who received close to $7.3 million the year before.

The biggest pay increase went to Michael O’Donnell, the CEO at Ruth’s Hospitality Group Inc., whose pay package more than tripled, to $7.7 million from $2.5 million a year before. But much of that increase came in the form of $5.9 million in stock awards, including a one-time, special award worth $4.8 million for his long tenure with the company.

On the other end, there are CEOs at some companies that have been struggling to generate sales and stock price momentum. Stock at Noodles & Company fell more than 60 percent last year, and CEO Kevin Reddy’s pay package, one of the lowest among publicly traded restaurant companies, declined by 7.8 percent to $922,737.