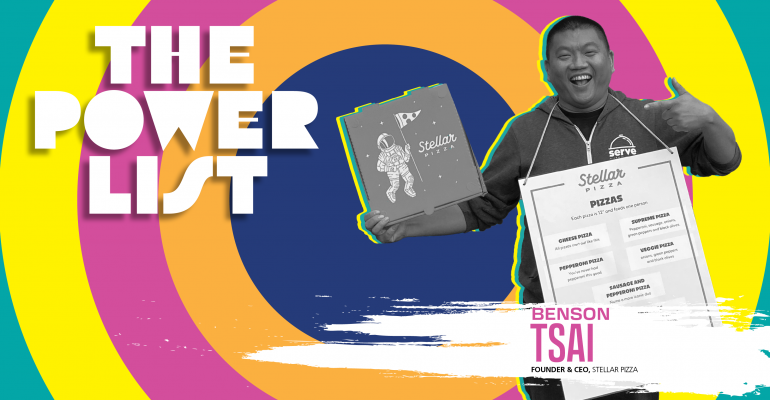 Benson Tsai is preparing to launch the new Stellar Pizza concept in 2022, a robotics-powered fleet of food trucks in Los Angeles that will bring hot-out-of-the-oven pies to the masses for about $10 or less in 4.5 minutes.
News>People

“Automation is the way we keep food costs low for everyone.”

That’s the idea that fuels Benson Tsai as he prepares to launch the new Stellar Pizza concept in 2022, a robotics-powered fleet of food trucks in Los Angeles that will bring hot-out-of-the-oven pies to the masses for about $10 or less in 4.5 minutes.

Making pizza is not rocket science, but Tsai and his team are raising it to that level. Tsai previously spent five years at aerospace company SpaceX designing battery systems, during a time when the company hosted 76 rocket launches.

“I felt like I lived an entire aerospace engineer’s career in those five years,” he said.

Before that, Tsai launched his own startup, building electric trucks and buses, and he spent years with Tesla challenger Lucid Motors designing luxury electric cars.

But Tsai said he found himself drawn back to the food world. His parents, who had emigrated from Taiwan, had opened a restaurant when they first arrived in the U.S. — a fish-and-chips shop —before they went on to start other businesses. They instilled that entrepreneurial drive in their son.

Now with Stellar Pizza, Tsai envisions a world in which commissaries serve up to 50 trucks, or “mobile restaurants,” as he calls them. Each truck can hold up to 440 dough balls and ingredients. With four ovens on each truck, a pizza can be produced every 45 seconds.

The customizable 12-inch pies have an airy thin crust developed with the help of noted pizza consultant Noel Brohner and chef Ted Cizma, the former executive chef and director of culinary services at SpaceX.

Each truck requires only one worker: the driver. The cooking is entirely automated, keeping costs low and allowing the brand to focus on keeping both ingredient quality and wages high (starting at $25 per hour). The model is ripe for franchising, said Tsai, though that would come down the road.

Tsai expects to scale quickly, potentially getting 100 trucks on the road served by two commissaries in the Los Angeles area, which would surpass the estimated 85 Domino’s locations in the city.

“What we’ve designed is a space ship on wheels,” said Tsai. “With automation, you get the quality and consistency for free. Once you dial in your recipe and your ingredients, the machine will make that exact same pizza every single time. It’s a really interesting way to have a quality product reproduced at scale.”