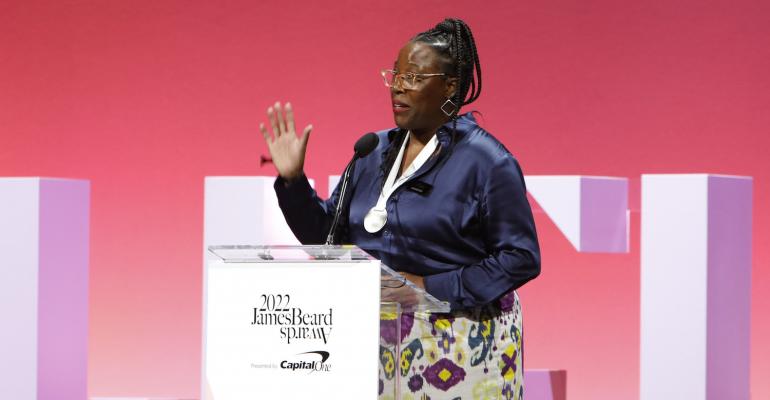 A geographically and ethnically diverse group was recognized

A geographically and ethnically diverse group of chefs mounted the stage at the Lyric Opera of Chicago Monday to receive the James Beard Foundation’s Restaurant and Chef Awards, with Mashama Bailey of The Grey in Savannah, Ga., taking top honors as Outstanding Chef and Edgar Rico of Nixta Taqueria in Austin, Texas, being named the “Emerging Chef.”

Bailey is the first Black woman to win the Outstanding Chef award.

The major culinary-destination cities such as New York, San Francisco, Chicago and Los Angeles were largely frozen out of the national awards, with only The Four Horsemen, a wine bar in the Williamsburg neighborhood of Brooklyn, N.Y., winning for Outstanding Wine Program.

The potentially career-boosting “Emerging Chef” award is a new category this year, replacing “Rising Star Chef,” which required that the winner be aged 30 or younger. The new award has no age restriction..

Some of the regional awards also went to cities that are usually passed over.

Best Chef of the Northwest and Pacific, which encompasses Oregon, Washington, Alaska and Hawaii, usually goes to a chef in Seattle or Portland. This year it went to Robynn Maii of Fête in Honolulu.

Best Chef of the Northeast, which covers the New England states of Connecticut, Maine, Massachusetts, New Hampshire, Rhode Island and Vermont and usually goes to a chef in Boston or Portland, went to Nisachon Morgan of Saap in Randolph, Vt.

Best Chef of the South (Alabama, Arkansas, Florida, Louisiana, Mississippi and Puerto Rico), which usually goes to a chef in Miami or New Orleans, went to Adam Evans of Automatic Seafood and Oysters in Birmingham, Ala.

The diverse roster of winners reflects reforms made in the awards process, which had been criticized in the past for being granted mostly to the same relatively small group of established chefs with good reputations among the media, and their protégés. Generally more than half of the nominees had also been nominated the previous year.

The past two years, when the awards were essentially canceled, replaced by broader celebrations of the industry, due to the pandemic and the unprecedented challenges restaurants faced, allowed the Beard Foundation awards committees to rework the awards — a process that was already underway before the pandemic as social movements called for greater recognition of women and minorities.

First held in 1990 as a booze cruise around Manhattan, the James Beard Foundation Awards grew in prestige over the years as food and restaurants became more central to American culture, and what was once a feel-good event to celebrate mostly the fine-dining world came to be taken more seriously; the James Beard Awards came to be referred to as the “Oscars” of the restaurant world.

With a higher profile came more scrutiny, and scandal began to hit the awards as past winners were exposed for allegedly improper sexual behavior in the workplace during the spread of the #MeToo movement. The Beard Awards also came under pressure to recognize a more diverse group.

The awards committees took the downtime since 2020 to rework the criteria for the awards as well as shake up the panels of judges who voted on them.

Now nominations for the awards must be accompanied by a short statement about how the candidate “is aligned with one or more of the Awards mission and the Foundation’s values — centered around creating a more equitable, sustainable, and healthy work culture,” according to the foundation.

Also, in the past anyone who had ever won a Restaurant or Chef Award was eligible to vote on semifinalists and nominees indefinitely. Now only winners from the past three years are eligible, and that eligibility isn’t automatic: They must be chosen by the Beard Foundation’s awards committee. Only winners from 2017 and later were eligible to be judges for this year’s winners.