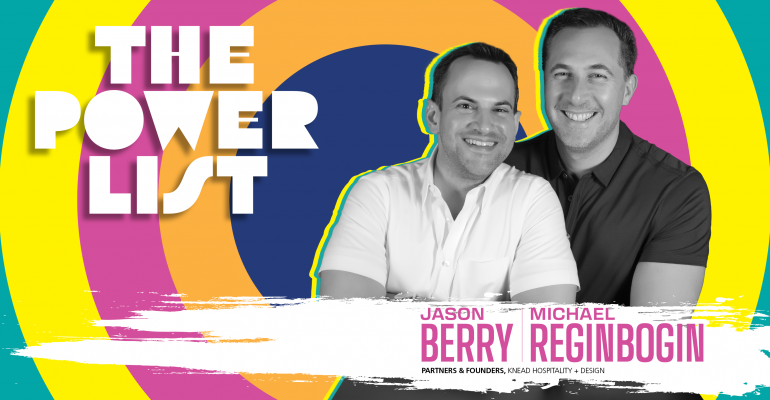 “Our industry has to do something,” said Jason Berry, who with Michael Reginbogin founded Knead Hospitality + Design in 2015 in Washington, D.C.
News>People

The D.C. company is piloting a four-day work week for salaried employees

It would take too long, and it would be traumatizing, to recount the litany of setbacks that have hit the restaurant industry over the past two years. But among the worst has been the loss of skilled people who make restaurants fun to visit and great places to work.

The pandemic has reset people’s priorities, and there are fewer chefs and managers who want to spend most of their waking life catering to the needs of increasingly petulant customers and hourly employees who only show up when they feel like it.

“Our industry has to do something,” said Jason Berry, who with Michael Reginbogin founded Knead Hospitality + Design in 2015 in Washington, D.C. “We’re getting crushed [by] the fact that money is not everything and lifestyle is a big deal.”

Knead operates a dozen restaurants, including Succotash, Mi Vida, The Grill, Mah-Ze-Dahr Bakery and Bistro du Jour in the Washington, D.C., area, and the group is about to test a new program for salaried employees called [email protected]

Under the new regime, managers and chefs would generally work four 12-hour shifts a week in restaurants and then, just like white-collar employees in other industries have learned to do, do work that doesn’t require them to be onsite wherever they want.

“The idea is when you’re at the restaurant you’re focused on the guest, on the food, on the service, on the facility and the team, and making sure that everything’s running great,” Berry said. “And then the things that you could do in an office [such as bookkeeping, scheduling, sending invoices and email] ... you can do it from the beach, from the mountains, from the car, from your home.”

That way they’ll have some of the flexibility that working in restaurants hasn’t traditionally provided.

The program hasn’t been tried yet because, although all of Knead’s restaurants are fully staffed — which is very unusual in restaurants these days — they need to be overstaffed for this to work because they need one more chef and one more manager at each restaurant, adding around $140,000 to payroll for junior positions.

But Berry thinks it will be worth it.

“This sounds a little spiritual, but I believe that there’s energy that good people, smart people, happy people, give in what they do every day,” he said.

Maybe you can’t quantify that energy, he said, but you can quantify higher sales and reduced turnover that come from more qualified people doing their jobs better and making their guests happy.

“A great line cook can work one and a half, sometimes two stations, whereas a brand new line cook can barely work one station,” he said. “If that great line cook isn’t going down the street for an extra dollar because their chef is a great chef and a great teacher and educating them and giving them what they need emotionally and not just financially … people leave less often, you’re able to do more with less, you’re able to create better food and beverage, your regular guests are seeing the same bartenders, the same servers, the same managers, the same hostesses, and they come back more often because they feel that this is a place that has their act together.”

Berry hopes to start trying this at a couple of locations this month. He said he’s not promising that every week will be a four-day week, because it’s the restaurant industry. Things happen. But he hopes that maybe 45-48 weeks a year will be four-day weeks, “and you can have a better life than you would anywhere else.”

“We’re not promising a four-day week,” he said, “but we’re promising you an approach and some leadership that helps you carve out a better life for you and your family.”