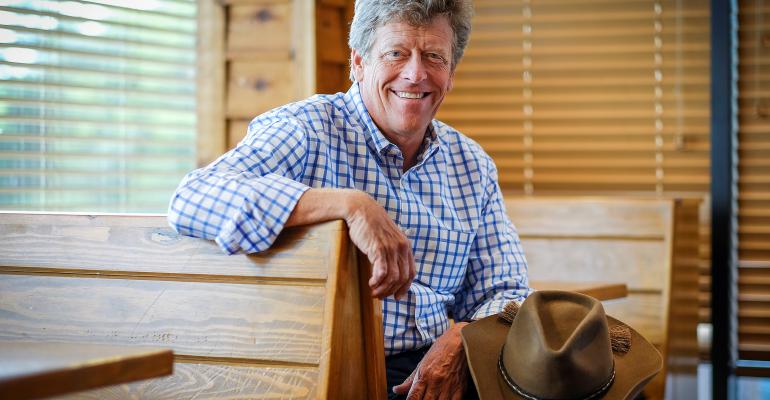 “Made From Scratch” publisher Simon & Schuster Inc. granted permission to Nation’s Restaurant News to publish this excerpt from Chapter 8 of the book, entitled “Getting the Recipe Right.”
News>People

Posthumously published “Made From Scratch” debuts this week

Before he died in March, Texas Roadhouse Inc. CEO and founder Kent Taylor was working on a book, that will be published Aug. 24.

“Made From Scratch: The Legendary Success Story of Texas Roadhouse” recounts how Taylor built the successful Louisville, Ky.-based casual-dining company, which opened in 1993 and has grown to more than 640 restaurants systemwide in 49 states and 10 foreign countries. The company also includes the Bubba’s 33 sports-bar concept and the fast-casual Jaggers.

Profits from the book will be donated to Andy’s Outreach, the non-profit employee assistance fund that he helped create. Workers can donate part of their paychecks to Andy’s Outreach to help other frontline employees in need. When the pandemic was declared, Taylor personally donated $5 million to the fund.

Taylor died by suicide in March after suffering complications from a COVID-19 infection.

“Made From Scratch” publisher Simon & Schuster Inc. granted permission to Nation’s Restaurant News to publish this excerpt from Chapter 8 of the book, entitled “Getting the Recipe Right,” in which Taylor wrote:

As opening day for our first Texas Roadhouse was approaching, it was clear that our bathrooms wouldn’t be ready in time, so I convinced the manager of the neighboring JCPenney to allow us to use their restrooms for a month or so. We were slated to open on Feb. 17, 1993. We couldn’t delay, as I was set to marry Leslie on March 20, and I needed the place humming by then. Leslie and I had set the date back in October and it had seemed like such a safe bet at the time. I had been sure we would open in early January. Yeah, right.

That February day we opened to decent crowds and the food was good; not the quality that we would eventually develop, but definitely better than Buckhead’s, the restaurant I’d launched a few years prior. The bands, true to form, were a pain, but our service was solid thanks to my plan of having servers work only three tables (what the industry calls three-table stations). The norm in the industry is a server working four to six tables, which means it takes longer to get in your order, get your food, and get out.

It didn’t take too long for the JCPenney manager to come in fuming. He asked me to follow him to his store, and there pointed out a trail of peanut shells on his nice shiny floor that led all the way to their restrooms. It was pretty funny, but I kept a straight face and nodded thoughtfully. He wanted to know what I was going to do about it.

I still had two weeks before our bathrooms would finally be finished, so I couldn’t really say what I was thinking, but still, was this all he had to get worked up over?

“Actually,” I told him, “I think you have a very positive situation here. Number one, your people don’t have to give our patrons directions to the restroom, they’ll just follow the peanut trail.”

He was not amused.

“Number two,” I added quickly, “I bet if you check the departments along the trail, you are going to see their sales are up.”

He harrumphed, gave me his best stern expression, shook his finger, and vowed, “Two weeks, Taylor, and we’re done. And it’s going to cost you more free dinners.”

A few days later, the manager came back into our store sheepishly and recanted. He said it would be no problem if our bathrooms took longer and our guests needed to use his facilities. “Take as long as you need.” He’d looked at the numbers, and believe it or not, sales along the path to the bathroom were up. “Really? You don’t say/”

We got our bathrooms open, the store running fairly smoothly, and I was able to marry Leslie.

More good news: Roadhouse made money from day one, and I was able to convince the doctors who’d invested in the company to break ground on Texas Roadhouse number two. Thankfully, my busy cardiologist partners weren’t sticklers for details about all the business stuff, so when I told them the next location would be in Gainesville, Fla., they raised no red flags. Most savvy business folks would have realized it was cuckoo putting a second location 750 miles away from the first. I thought my reasoning was pretty sound: My best mile time (4:09) came on the campus of the University of Florida in Gainesville, back in college, and I had liked the town. Solid business logic, right?

Anyway, a buddy I knew from my days at the Denver Bennigan’s wanted to move to Florida to run the store, so that would be a huge burden off me. The buddy had found a spot for the restaurant already, and all I needed to do was to run down and convince the owner to lease me the property, and we’d be on our way.

Since we were Sysco customers, we had put the Roadhouse name in a hat with all the other Kentucky and Indiana Sysco customers for a weekly drawing for a three-day cruise out of Fort Lauderdale. I thought it would be perfect if we could win that, as it would give Leslie and me an excuse to head to Florida. I told her that if the Roadhouse name was drawn, we could go on a real honeymoon.

“Sure, Kent,” she said. “What are the odds? One in a hundred?” She wasn’t holding her breath.

I followed the weekly drawings with piqued interest, but our name was never called. Finally, during the last week of the contest, Texas Roadhouse was called. No way? I timed my meeting with the Gainesville landlord for the day after the cruise docked. We drove the five hours to Gainesville and Clark Butler granted me a 45-minute meeting over lunch at an Olive Garden. Mr. Butler was 74 and the largest landowner in Gainesville, not to mention sharp as a tack. He sized me up quickly. When I told him we only had one Texas Roadhouse, and it had opened only six months prior, he laughed and explained that I had quite the nerve to think I could successfully open a second restaurant so far from the first and actually make it work. He appreciated me stopping by, but he had an offer on the property from LoneStar Steaks and would probably take it. Buh-bye.

I had 15 minutes left of lunch to win him over and I started wooing. Those 100-plus rejections had taught me a thing or two, and I made my most impassioned pitch. I’m not sure what I said that won him over, but he saw something in this upstart from Kentucky. Maybe he recalled a young Clark Butler fighting to make his mark in life. The next thing I knew we were driving around Gainesville and he was showing me his shopping centers, apartment buildings and empty tracts of developable land. Finally, he drove me to his office building for more conversation. Leslie had been surreptitiously trailing us in our rental car.

We sat down in his office, and I finally got up the nerve to admit my new wife was down in the car, in the Florida heat, and would it be possible for her to wait in the air-conditioned lobby? It would be fine for her to come in, he said, and asked Leslie to join us. Soon, he was quizzing her about her entrepreneur of a husband. She was a real trouper and backed me to the nines. Clark said how nice it was that I had a wife’s support (he was divorced), and a couple of hours later we were finalizing terms on the lease. I asked for 10 years with four five-year options. He countered that he never gave out more than one 10-year lease with two five-year options. I did quick math in my head. After his deal, he’d be 94. What was 10 more years at that point?

Out of my mouth popped: “What do you care? You’ll probably be dead anyway.”

That hung in the air for six long seconds, which felt more like six minutes, until Clark burst out guffawing and let out a huge belly laugh. He caught his breath, looked at Leslie (who I think had just shat in her britches), then back at me. “Well, kid, you’ve got some balls. Sure, why not? It’s a deal.”

Excerpted from Made From Scratch. Copyright © 2021 by Kent Taylor. Reprinted by permission of Simon & Schuster, Inc. All rights reserved.

If you or someone you know is considering suicide, please contact the National Suicide Prevention Lifeline at 1-800-273-TALK (8255), text "STRENGTH" to the Crisis Text Line at 741-741 or go to suicidepreventionlifeline.org.