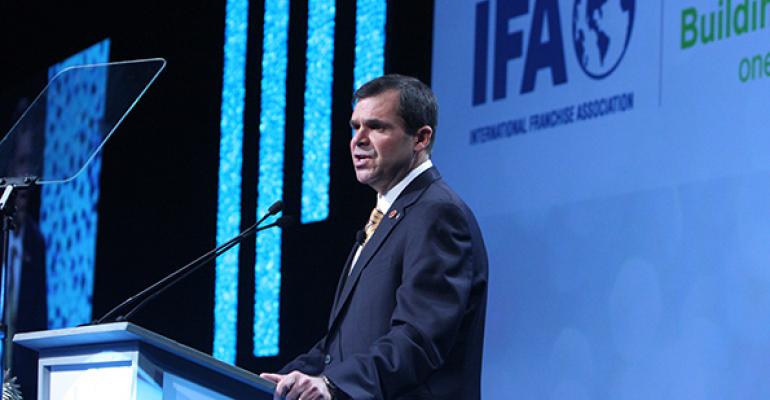 Steve Caldeira, president and CEO of the International Franchise Association, said Wednesday that he is stepping down after efforts to align on a new contract failed.

“I am very proud of our accomplishments during my tenure to protect, promote and enhance the franchise business model,” Caldeira said in a statement. “It has been a real honor and privilege to represent franchising, which is the true essence of entrepreneurship in America. While I appreciate the opportunity to have worked with so many respected business leaders and the extremely talented staff at the IFA, the time has come for me to move on.”

Robert Cresanti, IFA executive vice president of government relations and public policy, has been named interim chief operating officer of the Washington, D.C.-based lobbying group. The board has formed a search committee to find a replacement for Calderia, the association said.

“IFA and the franchising community recognize Steve’s strong contributions as our chief advocate and media spokesman over the past five-and-a-half years,” Melanie Bergeron, chairman of the IFA and Two Men and a Truck International, said in a statement. “Under Steve’s tenure, IFA’s revenue has grown by over 70 percent, its political action committee has nearly doubled to $1.3 million, and the association is now widely recognized as a go-to leader on small business issues.

“Steve gives everything he does 110 percent, and we are very grateful for his passion, dedication and wisdom as we have been navigating through the most challenging legislative and regulatory environment in our industry’s history,” she added.

During Caldeira’s tenure, the IFA launched an exhaustive effort to derail an expanded definition of what constitutes a “joint employer” relationship by the National Labor Relations Board.

However, the NLRB moved forward with the expanded definition in August.

The IFA also forged a compromise on legislation in California that sought to give franchise operators more protections from what some called predatory practices by franchisors.

Caldeira also led the IFA’s efforts to challenge the constitutionality of a $15 per hour minimum wage increase in Seattle, saying it discriminated against small business owners as franchisees by considering them part of a larger employer group that would be forced to raise wages faster.