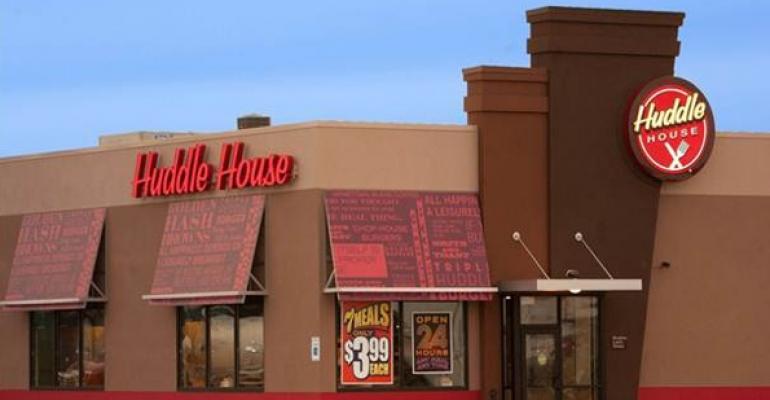 In restaurant franchising, much of the recent news about growth and development has centered on big deals involving large, multiunit operators. But while the multiunit franchise operators get most of the headlines — and in many cases, most of the bank financing — they are only a small, if growing, part of the growth plans for Huddle House, the Atlanta-based franchisor of more than 400 family-dining restaurants.

Chief development officer Jonathan Benjamin shared that 63 percent of Huddle House’s franchisees own only one restaurant, and another 26 percent operate just two or three locations. Yet working primarily with smaller franchise companies in small towns has not prevented Huddle House from reporting big numbers or big growth plans, Benjamin said.

The chain has driven annual increases in systemwide same-store sales the past three years, and it plans to open 175 new restaurants over the next five years. The brand completed seven separate franchise agreements in September alone.

Benjamin said Huddle House not only would attract more multiunit franchisees to hit its aggressive expansion targets but also would focus on building existing franchisees up into high-growth operators. The brand has developed a remodeling program and has reduced preopening costs significantly as well as focused on driving sales and traffic through the menu.

Benjamin joined Huddle House in July and is one of several executives to move to Huddle House since the brand was acquired in April 2012 by Sentinel Capital Holdings. He spoke with Nation’s Restaurant News about the family-dining chain’s development plans.

How has Huddle House successfully grown with franchisees of only one or a few units?

It’s been 49 years since Huddle House started, and really for the most part we’ve made our name going into markets where other chains wouldn’t venture. That doesn’t necessarily play into a large multiunit developer’s plans to begin with. Typically our franchisees are the “hometown heroes” and pillars of those local communities, folks who aren’t necessarily focused just on the bottom line.

We have a desire to open another 175 restaurants in the next five years, and we know we’ll have to have a mix of large and small franchisees to do that. We’re in the midst of cultivating a roster of those large multiunit deals and growing the pipeline for the onesies and twosies.

Are your smaller franchisees having difficulty getting financed?

The large, multiunit franchisees usually are not in need of any help from us for funding. They usually have their own lending relationships that are very strong and a long list of other lenders courting them. With us, we’ve found a nice niche of Small Business Administration and U.S. Department of Agriculture financing, with very attractive rates over a long period of time, so our partners don’t need to be able to put up tremendous assets. They have a large success rate getting financed.

A lot of those deals are concentrated where local banks in town want to lend in the community. So many of our restaurateurs know their local bankers, and that’s why they haven’t had a lot of those issues you hear about small operators not getting financing.

What are your initiatives for Huddle House to expedite the process and accelerate growth?

For one, we presently have an incentive with our existing franchise base where we’re reimbursing up to $25,000 if they remodel their restaurants. If you look at the age of some of our restaurants, some of those stores are looking a little dated. In an effort to invigorate the brand and franchisees, we’re promoting this rebranding program. There is also the economic case for the remodels that incentivizes them as well. In virtually every instance, stores that have remodeled have reported double-digit increases for same-store sales. The other thing that provides is some curb appeal from the standpoint of a new developer looking for something fresh and different. From there, in addition to the economic model, the cost of entry and of the refresh is causing a buzz among new developers and existing franchisees for growth.

There also will be some terrific menu innovation. We have a new corporate chef who’s innovating some of our classic items, like grits and biscuits and other Southern breakfast items. It’s changed our menu from “ho hum” to “holy cow.” Restaurateurs and franchisees like to be proud of what they’re developing and serving, and so if they have a real nice place to bring their clientele and nice food to serve them, it works well.

So where will Huddle House target for growth next?

We’ve got stores on the board now that in six months will open in some hyper-urban markets and condensed downtown areas with a lot of foot traffic. They’re going to be located very close to lots of employers and demand generators. We’ve also drawn up some plans at the behest of our clientele for nontraditional venues, like train stations and airports. We’ve proved our success within travel centers around the country. We know we can’t grow 175 stores just in small towns.