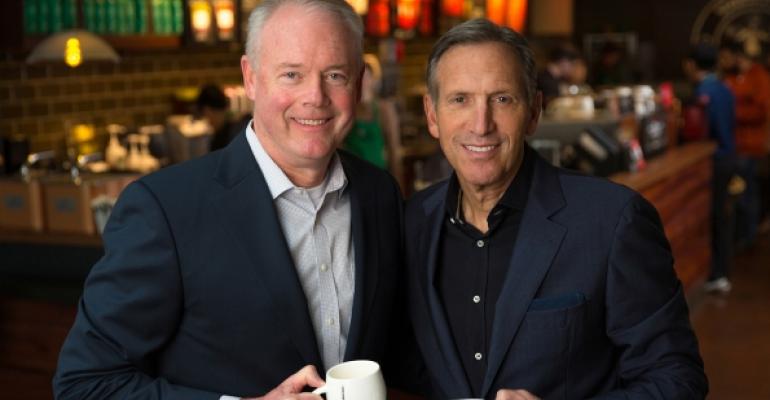 <p>Kevin Johnson, left, will take over as CEO of Starbucks in April when Howard Schultz becomes executive chairman. Photo courtesy of Starbucks</p>
News>People

Starbucks Corp. chairman and CEO Howard Schultz will take a step back from the helm to become executive chairman in April, moving president and chief operating officer Kevin Johnson into the CEO seat, the company said Thursday.

Schultz will shift his focus to innovation, design and development of Starbucks Reserve Roasteries around the world, expansion of the Reserve retail stores, and the company’s social impact initiatives. Schultz will continue to serve as chairman of the board.

The move is a continuation of a shift in focus to the more premium brands that began a year ago with the realignment of Starbucks senior leadership team to allow Schultz to lead the introduction of the emerging brands.

In a call with analysts Thursday, Schultz described himself fundamentally as an entrepreneur focusing on an exciting growth opportunity for the 25,000-unit chain. He said Johnson, meanwhile, has better experience to manage a company now operating in 75 countries.

“I think Kevin is better prepared to be CEO on an go-forward basis than I am in terms of his skill base and his understanding of technology,” said Schultz. “But I’m not leaving the company. I’m here every single day and I will contribute to what I see as a considerable growth opportunity.”

The move is a continuation of a change in strategy that began three years ago, when Schultz first began talking about the seismic shift of consumers away from brick-and-mortar retail to shop more online.

Schultz has since been positioning Starbucks as an experiential brand, a destination that both leverages the consumer dependence on mobile technology and offers them a place to experience the theater of coffee in a way that can’t be replicated online.

Last year, Schultz realigned the leadership team to allow him to focus on the Roastery, which opened in Seattle two years ago. Now the company plans a Roastery unit in Shanghai in 2017, followed by locations in New York and Tokyo in 2018. He envisions 20 to 30 of the units around the world.

Starbucks will also add another layer of premiumization with the roll out of 1,000 Reserve locations, beginning next year, offering micro-lot coffees and food from the recently acquired Italian bakery-café Princi. Schultz said Reserve locations are expected to deliver twice the unit economics of a typical Starbucks.

A third layer will come with the addition of more than 1,000 Reserve bars within traditional stores, offering the more premium coffees and brewing methods.

A board member since 2009, Johnson was named president and COO in March 2015, replacing former COO Troy Alstead, who at the time stepped away on sabbatical but later announced his departure from the company.

Johnson was previously CEO of Juniper Networks Inc., a networking and products and services firm. He also spent 16 years at Microsoft where he was president of the platforms division. In 2008, he was appointed to the national security telecommunications advisory committee, serving under Presidents George W. Bush and Barack Obama.

Johnson described Schultz as “one of the world’s most iconic leaders and entrepreneurs,” saying the two have worked side by side for years as Starbucks developed its five-year strategy unveiled in 2014.

That plan included a focus on mobile ordering and payment, a focus on more premium coffee and tea, expanded dayparts with greater food sales, and unit growth.

“We are well in execution mode,” he said.

The challenge is to build the more premium brands at the same time as accelerating the pace of customer innovation across the core brand, all at scale, he said.

Next week, Starbucks is scheduled to hold its biennial investor meeting, during which an update on the five-year strategy will be outlined.

Correction: Dec. 1, 2016 Due to an editing error, an earlier headline contained a spelling error in Howard Schultz's name.  This story was also updated with more information from Starbucks.