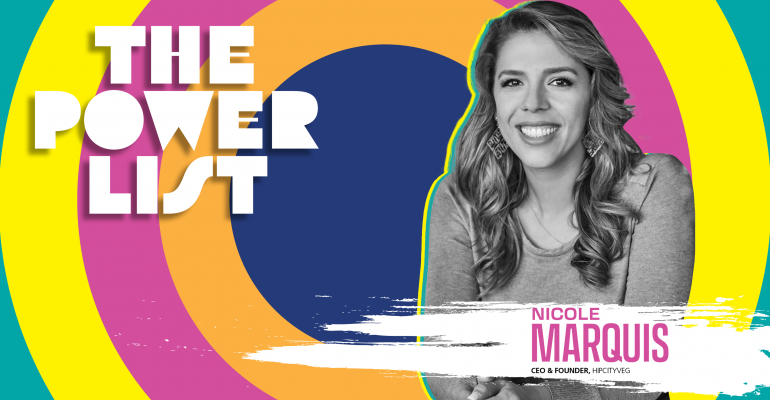 Nicole Marquis calls HipCityVeg employees her family, and one way she decided to take care of her family was to raise the minimum wage to $15.
News>People

Nicole Marquis, founder and CEO of HipCityVeg, explains how she employed a $15 minimum wage across her restaurants

“We truly believe that plant-based foods are the future. And I believe that we can save the world by eating more veggie burgers.”

Those words are from Nicole Marquis, CEO and founder of plant-based fast casual HipCityVeg. But food isn’t the only mission for the soon-to-be-15-unit chain. Marquis calls its employees her family, and one way she decided to take care of her family was to raise the minimum wage to $15.

“We think we were the first fast-casual chain in the country to raise our starting minimum wage to $15 an hour for the entire company in all cities,” she said.

That raise was enacted in summer 2021 and affected workers in Philadelphia, where the company is based. Minimum wage in the state of Pennsylvania is $7.25 per hour, and the change increased wages for around 75% of workers at the time.

The company also has stores in Washington D.C. and a new one in New York City; both of those jurisdictions already had a minimum wage of $15 an hour.

The move, dubbed “15 for Families” by Marquis, is “building the world we want to live in” and “communicating through our actions how much we value those who helped us get through the pandemic and continue to contribute to our success.”

In a sign of immaculate foresight, “15 for Families” was created just before the labor shortage and was designed to help retention — which it achieved for HipCityVeg.

“We are building the company’s leaders from within, which is so important, especially as we grow,” Marquis said. “We want our team to know that we can offer careers, not just jobs, and that includes benefits like health and dental and paid vacation.”

The chain started with the premise that eating well can save lives.

Marquis’ father was experiencing eating-related health issues, all of which were solved when she started cooking him — a “meat and potatoes guy,” as Marquis describes him — plant-based meals. The first, a green juice, is still on the menu at HipCityVeg.

“My concept in creating HipCityVeg was to serve food that was familiar to people — like the fast food most of us, including me, grew up on — so that people would actually give it a try,” she said. “I insisted from the beginning that our food had to compete and win against traditional foods solely on the basis of taste and satisfaction.”

In October, HipCityVeg opened its first New York City location in the Union Square neighborhood; the unit serves as a new flagship. The company also opened several “Go Kitchens” in neighboring boroughs to serve as ghost kitchens operating with support from the main hub in Union Square.

“We want to make it easy for people to get our food, no matter what zip code they live in,” Marquis said.

In the year ending February 2022, HipCityVeg will have doubled from seven units to 15 across three states.

“Most of our guests are not vegetarian or vegan; they come because they love the taste [of our food] and the way they feel after eating it,” said Marquis.

She added that she hopes HipCityVeg will be the first plant-based chain to expand nationally.

“We have a mission-driven and woman-led team that has proven time and again, especially over the last couple of years, that we can absolutely do anything we set out to do, no matter how huge the obstacles are,” she said. “I want us to all continue to grow and benefit from the company's growth and to fulfill our ultimate mission of bringing delicious plant-based meals to people everywhere.”