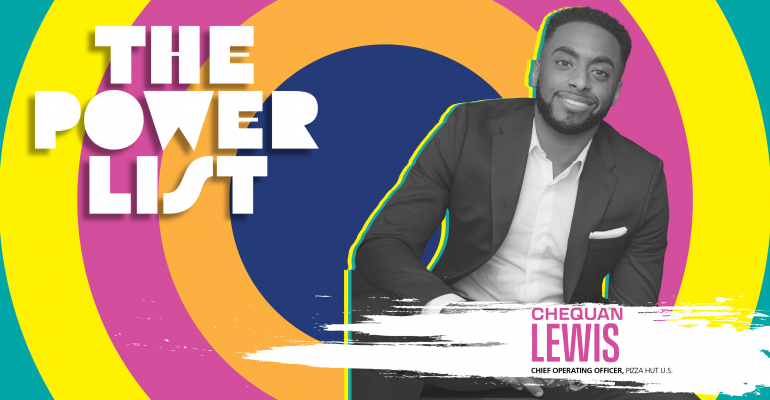 After spending more than a year as Pizza Hut’s first chief equity officer, Chequan Lewis said he is bringing the brand’s values around diversity and inclusion to the next level by creating a model in which workers are encouraged to see all of the career potential that a job in the restaurant industry can provide.
News>People

How Chequan Lewis is creating pathways to advancement at Pizza Hut

The time is right for restaurants to rethink their approach to employment as a path to advancement and ownership, said Chequan Lewis, who was recently promoted to chief operating officer at Pizza Hut U.S.

After spending more than a year as Pizza Hut’s first chief equity officer, Lewis said he is bringing the brand’s values around diversity and inclusion to the next level by creating a model in which workers are encouraged to see all of the career potential that a job in the restaurant industry can provide.

“I think I can really help be a part of what it means to drive that people-first culture that really takes people from point A to point Z in their careers,” said Lewis.

Pizza Hut, founded in 1958 by brothers Dan and Frank Carney with a $600 loan from their mother, provides an example of how entrepreneurship can drive the restaurant industry and create pathways to success, he said.

The chain, now owned by Yum! Brands and featuring a global system of more than 18,000 company-owned and franchised locations, has entrepreneurship “built into its DNA,” said Lewis. Pizza Hut can better use its vast resources and experience to provide the assistance workers may need to move up the career ladder and eventually become business leaders themselves, he added.

As chief equity officer of Pizza Hut U.S., Lewis, a Harvard Law School graduate and former attorney, partnered with various parts of the business on key programs and policies to advance the brand’s vision around equity and inclusion. That included working with franchisees and other stakeholders to drive a “culture of belonging” in Pizza Hut restaurants and corporate offices. Before that, he worked in various operating areas of the company, including nontraditional locations and customer experience initiatives.

Creating a culture where employees can clearly see pathways to further their careers and advance toward business ownership will be central to Pizza Hut’s future, Lewis said, noting that most of the restaurant chain’s employees are people of color and women. Attracting and retaining these workers requires investments on the part of the company directed toward supporting employees who want to grow with the company.

“When we talk about this idea of a pathway to greater possibility, I think our restaurant industry has got to get really serious,” Lewis said.

Part of the solution to the current labor crunch and to improving hiring and retention involves investing in more efficient operating systems that make restaurants easier to run, he said. That can be a win for both employees and for the bottom lines of the company and its franchisees, he said.

“In this moment in time that we're experiencing right now, especially in the middle of a labor crisis, especially in the middle of inflationary pressures and historic rates of turnover, we know that this is the moment to really double down on people,” Lewis said. “By investing in those folks right now, in a moment like this, we think that we can not only grow as a brand, but really be a part of a brand that grows our society and really moves forward and giving people chances to grow.”