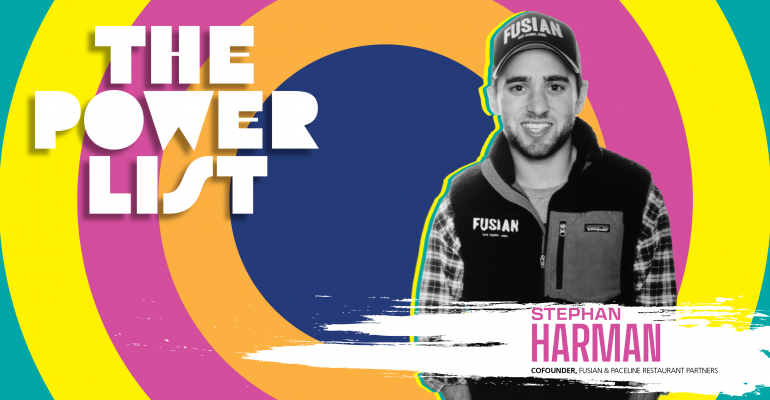 Stephan Harman's company created Paceline Restaurant Partners to grow new concepts leveraging the learnings and systems that have fueled the success of the Fusian concept.
News>People

Stephan Harman built a successful fast-casual sushi chain, and now he wants to share in that success with other budding restaurateurs

Stephan Harman, cofounder of fast-casual, customizable-sushi chain Fusian, is focusing on expanding his core concept near home while at the same time investing in auxiliary brands to diversify the company and promote entrepreneurship.

“The pandemic had us really look at ourselves and say, ‘How can we continue to not only provide opportunities for team members, but also continue to incubate the next generation of restaurateurs?’” said Harman.

The Columbus, Ohio-based company created Paceline Restaurant Partners to grow new concepts leveraging the learnings and systems that have fueled the success of the Fusian concept. It’s named after a bicycle racing term, a strategy by which racers save their energy by drafting off a leader.

Through Paceline, the company has developed two new concepts — the Wizard of Za, which Harman describes as a “speakeasy pizza concept,” and Hunny Bee’s, which specializes in fried chicken fingers, fries and shakes. Both concepts launched in Ohio, where Fusian operates all 12 of its flagship restaurants.

“It's been a great way for us as a company to continue to find opportunity in our home markets, even if it's not on the Fusian side, so we can capitalize on more real estate options in our existing markets,” said Harman.

Wizard of Za was started by Spencer Saylor out of his home kitchen during the pandemic, and it quickly amassed a weeks-long waiting list. Harman and his team brought Saylor into the Paceline model to open his first brick-and-mortar next door to a Fusian location. Hunny Bee’s is a Paceline original — a crispy fried chicken concept "with its sights set on treating people with good food and warm smiles across the Midwest and beyond," said Harman. It was co-founded by Joe Niehaus, a longtime friend of Fusian’s founders who partnered with them to launch Hunny Bee's in December in Dayton, Ohio.

Harman said he and his partners have developed a relationship and a platform that allows them to scale their restaurants, regardless of cuisine.

“We are really excited about the opportunity for Hunny Bee’s and … the Wizard of Za to continue to open more restaurants and continue to provide more jobs and ultimately create more value as a company,” Harman said.

The new concepts will also allow Fusian to grow in existing areas where it already has a presence without fear of over-saturation.

With concepts in the sushi, pizza and chicken segments, Fusian has been looking at potential opportunities in the breakfast space.

As far as expansion for Fusian, which is known for its unconventional sushi ingredients such as chicken and peanut butter and jelly, Harman said he is focused primarily on existing markets, all in Ohio. The company is planning an additional location in Cincinnati, likely in the second quarter of 2022, and is exploring its opportunities in the Cleveland market, where it has yet to open a restaurant.

“We think that there's certainly more opportunity in our home market and we want to take every advantage we can to find the right real estate and to find the right people to help us make it happen,” said Harman.

“Our hope and our philosophy is that meals are a time for people to connect,” he added. “Whether they're eating it through delivery or they’re coming to visit our restaurant, we're finding new and innovative ways to continue to connect with our customers and provide a little treat in their day to make them smile. Ultimately, that’s been a winning formula for us to continue to grow.”