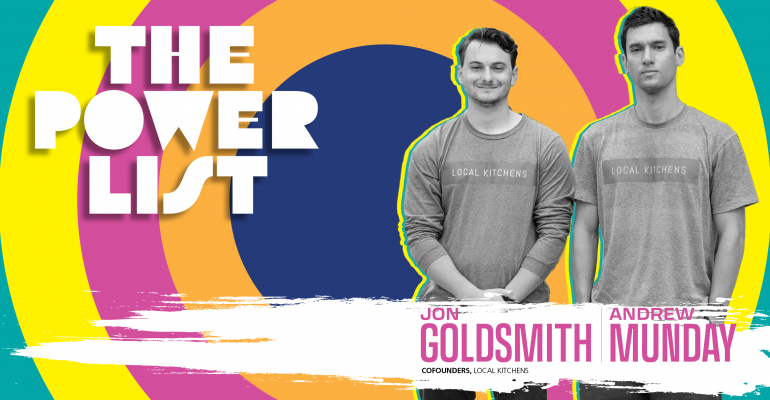 Describing the concept as a network of “micro food halls,” Jon Goldsmith said Local Kitchens is unlike typical ghost kitchens in that his company staffs and manages the locations itself, offering pared-down versions of menu items from its restaurant partners.
News>People

Local Kitchens’ cofounders offer an efficient model that is part ghost kitchen, part food hall — and wholly suited for brands looking to expand to the ’burbs

In the wake of the pandemic, the time is right to take a close look at what’s working and what’s not in the restaurant industry, said Jon Goldsmith. He’s the cofounder and CEO of Local Kitchens, which operates off-premises outposts for popular restaurants in the San Francisco Bay Area.

Describing the concept as a network of “micro food halls,” Goldsmith said Local Kitchens is unlike typical ghost kitchens in that his company staffs and manages the locations itself, offering pared-down versions of menu items from its restaurant partners. Customers can mix and match items from the restaurants to combine them in a single order for delivery or pickup.

Local Kitchens’ restaurant partners receive a percentage of the revenues, while Local Kitchens absorbs all of the costs in its efficient operating model.

“Our kitchens are about two to three times more efficient on a sales-per-labor-hour basis than the typical industry benchmark, and so we're able to pay above market wages and really treat our cooks right, while still powering really efficient expansion,” said Goldsmith.

Both Goldsmith and Andrew Munday, another cofounder who runs the company with Goldsmith as chief operating officer, were involved in the early days of third-party delivery giant DoorDash and are seeking to create a model that will allow restaurant operators to grow in new locations and new markets.

Local Kitchens is expanding beyond its initial five locations in the San Francisco Bay Area with a Roseville, Calif., site planned for the first quarter, followed by openings in Southern California and then Texas, possibly by the end of the year. Restaurant partners are expected to include both existing brands and new, locally based operators.

One of the dynamics that is driving growth of the Local Kitchens concept, said Munday, is the migration from urban to suburban living that accelerated during the pandemic. Consumers who make that transition often want to continue to enjoy the quality and variety of restaurant options that were available to them in cities.

A key element of the Local Kitchens business model is the in-person hospitality that the concept offers, he said, despite a heavy reliance on technology. Each location is staffed with a greeter who can help customers with their orders and make product recommendations.

Munday said the company realized the need for an operation such as Local Kitchens after discussing the challenges that some local restaurant operators in San Francisco faced as they sought to expand to new locations.

“We got the same feedback from everyone, which was that operationally it was very labor-intensive to start a new place,” he said. “This line that always stood out to me was, ‘Every time we open a new brick-and-mortar, we don't see our families for nine months.’

“But from our angle, they have this incredible [intellectual property], which is their restaurant, their brand and their recipes,” he added. “We want to help these operators expand throughout the U.S.”