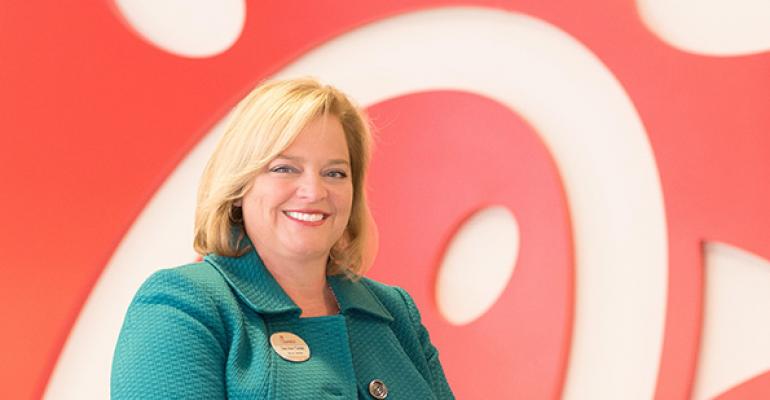 Chick-fil-A often is held up as an exemplary organization for both its dedication to service and the corporate culture behind that.

Dee Ann Turner, a 30-year veteran of the Atlanta-based limited-service chain and vice president of corporate talent, has provided new insights into Chick-fil-A’s recruitment and retention of both franchisee operators and staff in her new book, “It’s My Pleasure: The Impact of Extraordinary Talent and Compelling Culture.”

The book will be published Nov. 3. Turner talked with Nation’s Restaurant News about her approach to “It’s My Pleasure” and how, since the company’s founding by S. Truett Cathy in 1946, the culture has helped Chick-fil-A achieve sales increases of nearly 10 percent a year and corporate-staff retention rates of about 95 percent. The company now has 1,960 restaurants nationwide.

How did you come about writing “It’s My Pleasure?”

Truett had passed away. I was going through a period of grief of losing him and actually I had lost my father about the same time. They were two mentors in my life. I started to write this because I needed to express it as I worked through my grief. And the next thing I know, I had written a book.

What’s the advantage for the Chick-fil-A brand?

I learned so much from Truett during those 30 years. I wanted to write it down so internally within our organization the people who never knew Truett would have the opportunity for an inside glimpse from my perspective.

In the book, you recount meeting Cathy for the first time on your second interview in 1985 and being impressed with his personal touch. How does that translate to the unit level?

Truett was very personal. Everyone at the home office, what we call the support center, was. The human resources offices were right next to the elevator, where the executive offices were at time. There was reason for that. When candidates would come by, Truett and other executives would come by and introduce themselves. That was part of the culture, including the franchisees. It’s not uncommon for the franchisees to come in every morning and greet each and every one of the employees. At the end of their shifts, they thank them for serving. It’s common for them to understand the needs and desires of their team members.

Do you have examples of that?

I can think of two in particular. One is an operator named Kevin, and I write about this in the book. When he came in the office one time, Truett met his [Kevin’s] daughter and mentioned that she had a beautiful smile and that smile would be a big advantage to her in the future. Kevin was touched by that so much that he has made it a point to help his team members receive orthodontic care so they can have beautiful smiles, too. His wife even drives some team members to their orthodontic appointments. Another operator had team member who is a single mother of four who was taking a taxi to work every day. He saw that. He and the other team members chipped in and the operator, Brad, bought her a car so she would no longer have to take a taxi back and forth to work. That was what I saw in Truett. He cared deeply about people to know what their dreams, desires and needs were. And he set the example.

How would you distill the message of “It’s My Pleasure?”

It’s all about how to select extraordinary talent and build a compelling culture that creates enduring impact. Truett often said that we are not in the chicken business; we are in the people business. He cared about impact. He cared about being something more. Selling chicken was only the means to an end, and that end was impacting the lives of people.

Can you systemize serving one another in recruitment and training?

That’s one of the great mysteries of Chick-fil-A. We don’t systemize it. We can’t with the franchisees. We can coach them. It starts with the selection of the franchisee. Truett believed that if you selected the right franchisee — somebody who represented the values of the organization — and the [corporate] leaders here set the example, those two together would create the environment we are looking for in our restaurants. … It has permeated the organization purely by example.

Chick-fil-A offers unusual events such as Daddy-Daughter Date Nights and other special events. How important is that in retaining talent?

It’s fun to surprise and delight a guest. If you have job where there are hard parts —it’s not easy to squeeze cases of lemons for fresh-squeezed lemonade; it’s hard to press out chicken flat — but you have something that is a little different in surprising and delighting guests, like a Date Night or a tour of the restaurant, it makes it more fun. It seems more exciting and that helps with retention.

In the book, you give 10 characteristics to observe and consider during the hiring interview process. Do one or two weigh more heavily?

Two really stand out to me. First, looking at the candidate’s track record to see if it indicates good judgment and decision-making is one. Truett reinforced the need to select people with good judgment. When you do that it, it cuts down on having to have a lot of formal policies and rules. He always said that when people use good judgment, that leaves the door open to innovation and creativity. He set the example there. He allowed people to make a mistake and learn from that. Good judgment was at the top of list. Secondly, it’s important to check references. Many organizations fail to do this effectively, yet it’s the easiest way to prevent a hiring mistake. … Past performance is the best indicator of future performance. It takes extra time to check references, but it makes the hiring decision very clear.

Why did you choose “It’s My Pleasure” as the book title?

It actually represented how I felt. Like a lot of Chick-fil-A people, I use that phrase. I take it to heart. It reflected my feeling about Chick-fil-A. My publisher refers to this book as my love letter to Chick-fil-A.

A number of books about servant leadership are coming out of the restaurant industry now, including yours and “Dare to Serve” by Cheryl Bachelder, CEO Popeye’s Louisiana Kitchen Inc. Is there something in the corporate zeitgeist?

I’ve read Cheryl’s book. It’s a great book, and she’s a friend of mine. In general, we’re learning that talent is not totally dispensable. In one of the chapters, I write about sustaining talent vs. retaining talent. We make huge investments [in team members], and we want to get a return on that investment. There’s not an endless supply of talent, just like in other resources. I do think there is shift. We’re also at a cycle of a generational change with the Millennial generation, and every time that happens there is a pause and we have to figure out how to manage this [new] group. This generation cares about being a servant generation. They want us to care about the planet. They want to know we care about their future. It’s a natural pause in going from one generation to another and recognizing what talent is expecting nowadays.

If you were to give the Dee Ann Turner of 30 years ago advice today, what would that be?

I am so incredibly grateful for all my opportunities. I really don’t have any regrets. But if I could give myself advice 30 years ago, I think it would be to not be afraid to fail. We learn from making mistakes.

You mention one in the book.

I talk about my first big mistake, which was, of all things, misspelling the word “restaurant.” It costs the company about $5,000. I never did that again, and I was always careful after that. I learned that failure is not fatal. It can hopefully lead to some phenomenal professional and personal growth.

Where will the book available on Nov. 3?

Your readers can get it at www.deeannturner.com or order it on Amazon.