Ana Amaya is the executive chef and Adrian Del Angel is executive sous chef at Radio Milano and Milano Bar at the Hotel Sorella Citycentre in Houston.

The husband-and-wife team started working together when Amaya was a line cook and Del Angel was a dishwasher at Maverick in Houston’s Hotel Derek. That restaurant was reconcepted as Bistro Moderne, where Amaya was sous chef and Del Angel was lead cook. The couple then worked at different restaurants before being reunited at Max’s Wine Dive in Houston Heights. They joined Hotel Sorella Citecentre in 2016 a sous chefs.

Troy Batten has been promoted to executive chef of two properties in Jackson Hole, Wyo., operated by Noble House Hotels & Resorts: Hotel Terra Jackson Hole and Teton Mountain Lodge & Spa. Originally from Pocatello, Idaho, Batten joined Teton Mountain as lead line cook at the property’s Spur Restaurant & Bar and worked his way up to evening sous chef and, in 2017, to chef de cuisine, a job he held until his latest promotion.

Victoria Blamey is the new executive chef of Gotham Bar & Grill, replacing Alfred Portale, who had been the chef of the New York City landmark since it opened in 1984. Originally from Santiago, Chile, Blamey spent several years, starting in 2004, traveling the world and working in fine-dining restaurants, including stints at Mugaritz in San Sebastian, Spain; ABaC in Barcelona, Spain; The Vineyard at Stockcross in Newbury, England; Interlude in Melbourne, Australia; and WD-50 in New York. Once in New York she worked as sous chef at Atera, chef de cuisine at Corton, sous chef and chef de cuisine at Il Buco Alimentari e Vinieri and Upland, and, most recently, as executive chef of Chumley’s, where she had been since 2016.

Devin Braddock is the new head pastry chef of Ark Hospitality Group, based in Coconut Grove, Fla., with responsibility for the desserts at Ariete, Chug’s, Leña, The ScapeGoat and Taurus Beer & Whiskey House. After attending Johnson & Wales University in Miami, Braddock got her start in the pastry kitchen at Café L’attito in Sunny Isles Beach, Fla. She later spent three years at Wynwood Kitchen and Bar before moving on to Michael’s Genuine and then Alter. She then became corporate executive pastry chef at Mignonette and Blue Collar.

Thomas Burke has been named executive chef of the soon-to-open Mirabeau Inn & Spa Rhinebeck in Rhinebeck, N.Y., including its signature restaurant, Willow by Charlie Palmer. Most recently, Burke was chef of Tavern at GrayBarns in Norwalk, Conn. Prior to that he worked as chef de partie at The French Laundry in Yountville, Calif., and before that he was chef de partie at Le Bernardin in New York City, preceded by a job as chef de partie at Boulevard in San Francisco. He also spent two years as executive sous chef of Purdys Farmer and The Fish in North Salem, N.Y., and he started his career as sous chef at Brio Tuscan Grille’s Danbury, Conn., location.

For many years Floyd was the executive chef of Tabla, an Indian-influenced fine-dining restaurant in New York City that was part of Danny Meyer’s Union Square Hospitality Group. He went on to be executive chef and partner of another USHG restaurant, North End Grill, before opening Paowalla in 2016, which was reformatted as Bombay Bread Bar. Cardoz recently announced that he is closing that restaurant at the end of September.

Christopher Carriker is the new executive chef at L’Auberge Del Mar in Del Mar, Calif., with responsibility for culinary operations at the property’s three dining venues — Kitchen 1540, the Living Room’s Coastline Deck and Blue Bar — as well as banquets, meetings and in-room dining. Most recently, Carriker was executive chef of the Michael Mina restaurant International Smoke in San Diego.

Joe Flamm is leaving his post as executive chef of Chicago Italian fine-dining landmark Spiaggia to open his own restaurant, details of which remain sketchy, but current chef de cuisine Eric Lees is being promoted to executive chef, according to a representative from Spiaggia, which is part of Levy Restaurants.

Paul Gregory is the new executive chef of Double Take at the Hotel Palomar Los Angeles in Beverly Hills, Calif. In that capacity, he also oversees the culinary program of the whole hotel. A hotel restaurant veteran, most recently he was the executive chef of The Westin South Coast Plaza Hotel in Costa Mesa, Calif., and before that he was food and beverage director of The Westin Los Angeles Airport.

Jason Gronlund is the new executive chef of Moe’s Southwest Grill, a fast-casual chain based in Atlanta with more than 700 locations. A former corporate chef of Smokey Bones Bar & Fire Grill, Hard Rock International and Carla’s Pasta Company, he also was director of ingredient sales and culinary services for hot sauce manufacturer Tabasco.

Cher Harris has been promoted to corporate pastry chef at Hershey Entertainment & Resorts Company in Hershey, Pa. In her new role, she will help with development of a new confectionary scratch kitchen and ice cream parlor among other projects.

Harris had been executive pastry chef of The Hotel Hershey since 2009.

Troy Jorge has been named executive chef of Temporis in Chicago. The native of New Bedford, Mass., got his start after culinary school at the Ritz-Carlton Boston before spending two years at Clio in Boston. He then worked for the Columbus Hospitality Group at The Federalist and Ostra — both also in Boston. In 2015 Jorge moved to Chicago and worked at Grace for two years, followed by a stint as sous chef at Acadia. Most recently he was consulting for a restaurant and art gallery in Chicago’s West Loop.

Ricky Kusuda has been promoted to chef de cuisine of Bali Steak & Seafood, the signature restaurant of the Hilton Hawaiian Village Waikiki Beach Resort in Honolulu. Most recently, he was the property’s banquet chef.

Johana Langi has been named executive pastry chef of sister restaurants Bar Boulud and Boulud Sud in New York City, which are both part of Daniel Boulud’s Dinex group. After interning in the Good Housekeeping Test Kitchen, she landed a pastry internship at Thomas Keller’s Bouchon Bakery. She went on to work in the pastry kitchens of Eleven Madison Park, Saul Restaurant at the Brooklyn Museum, The Lambs Club, Ciano and Junoon before taking up her current position.

Anthony Micari is executive chef of Mystique Asian Restaurant & Lounge at the Encore Boston Harbor hotel in Everett, Mass. Most recently he was chef of Makoto in Miami.

Robert Mitchell has been named executive chef of Bold Catering & Design, the event catering, design and production arm of Fifth Group Restaurants in Atlanta. Previously, the chef had spent 20 years working for Marriott International in the Southeastern United States. In 2013 he moved to Atlanta and held such positions as executive chef of the J.W. Marriott in Buckhead and food and beverage director of the Renaissance Hotel. Most recently he was executive chef of The Hotel at Avalon and South City Kitchen Avalon.

Ryan Pfeiffer has been promoted from chef de cuisine to executive chef of Blackbird in Chicago. A native of Chicago, Pfeiffer spent formative years in California farm country, including a stint at Brothers restaurant in Santa Ynez. He returned home and staged at various fine-dining restaurants before joining Blackbird as a line cook in 2014.

Peter Saletta is the new executive chef of Union Street Public House in Alexandria, Va. Raised in a restaurant family in Sarasota, Fla., Saletta studied hospitality and business management at the University of Florida in Gainesville. He went on to work at several high-end chains including Fleming’s Steakhouse, Sullivan’s Steakhouse and McCormick & Schmick’s. While working at Black Finn in Washington, D.C., he won a local barbecue cook-off.

Jonathan Searle is the new executive chef at Proof on Main at the 21c Museum Hotel in Louisville, Ky. Searle originally joined the restaurant in 2011 and worked his way up to become executive sous chef. He then opened Lockbox restaurant at 21c’s Lexington, Ky., property before returning to Louisville to take up his current position.

Katy Velazquez is the new corporate chef of Qdoba Mexican Eats, a chain of more than 700 locations based in San Diego. Most recently the native of Irvine, Calif., was executive chef of Puesto, a six-unit casual dining chain also in San Diego. Prior to that, she worked with chef, restaurateur and Mexican cuisine pioneer Rick Bayless, for whom she was kitchen director for the PBS series “Mexico — One Plate at a Time” and oversaw the development of his cookbook, “More Mexican Everyday: Simple, Seasonal Celebratory” She also was culinary director of Bayless’ podcast, “The Feed.”

Atsushi Yoshimoto is the new executive chef of Suzuki in New York City. Originally from Okinawa, Japan, Yoshimoto grew up cooking on the island, and then moved to Tokyo and worked at a high-end izakaya restaurant whose owners also owned Aburiya Kinnosuke restaurant in New York. He moved to the United States to cook there, and most recently joined Suzuki. 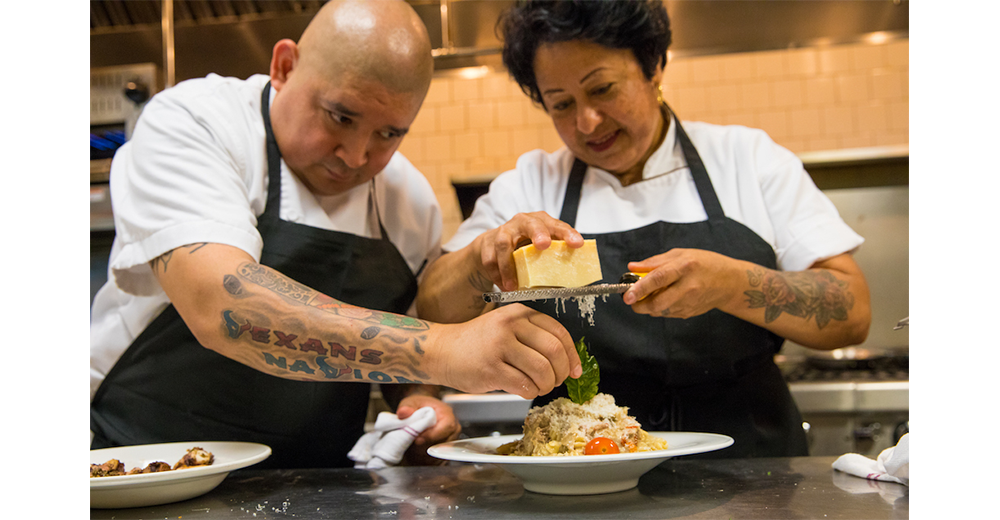